This is what Honest Ed's looks like in its final hours

It's closing time at Honest Ed's, the discount institution that's operated on Bloor just west of Bathurst for almost 70 years. Those hoping to get a last look at the iconic retailer before the new year will find a store that's been almost entirely cleared out, save for overpriced bits of ephemera and a variety of near-useless items being offered for pennies. 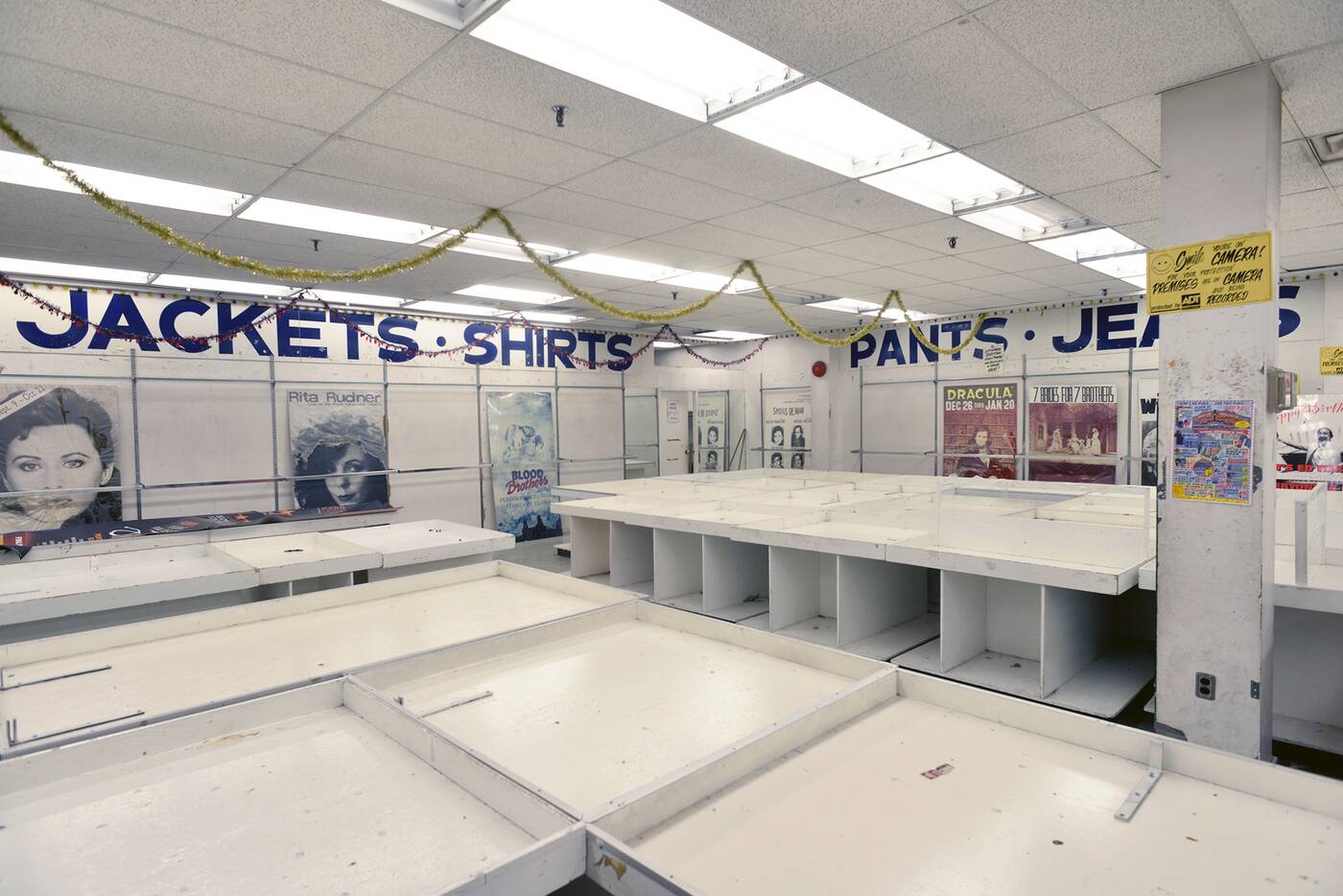 It's a depressing sight saved only by the customers who have come to pay their last respects. Strolling through the now-empty aisles, you hear various refrains like "it's so sad" and "what a shame" mixed in with revelations like "I can't believe how awful it looks in here." 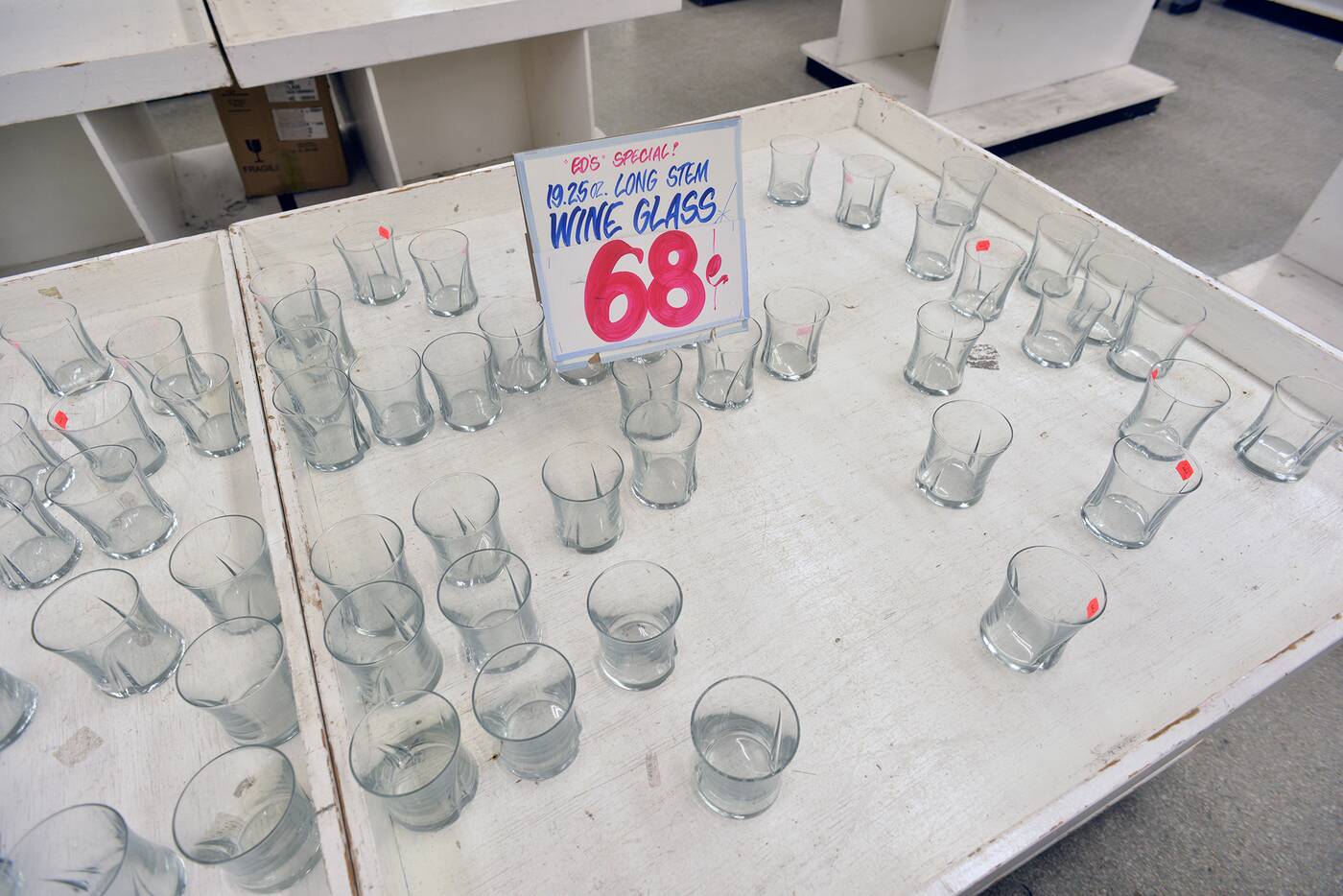 If there's one thing that's happened since the bulk of the products were sold off and shipped out last weekend, it's that a certain sentimentality regarding the contemporary state of the store has become complicated. Everything here looks as though it belongs in a previous decade, right down to the bin of cassettes being sold off for 99 cents. 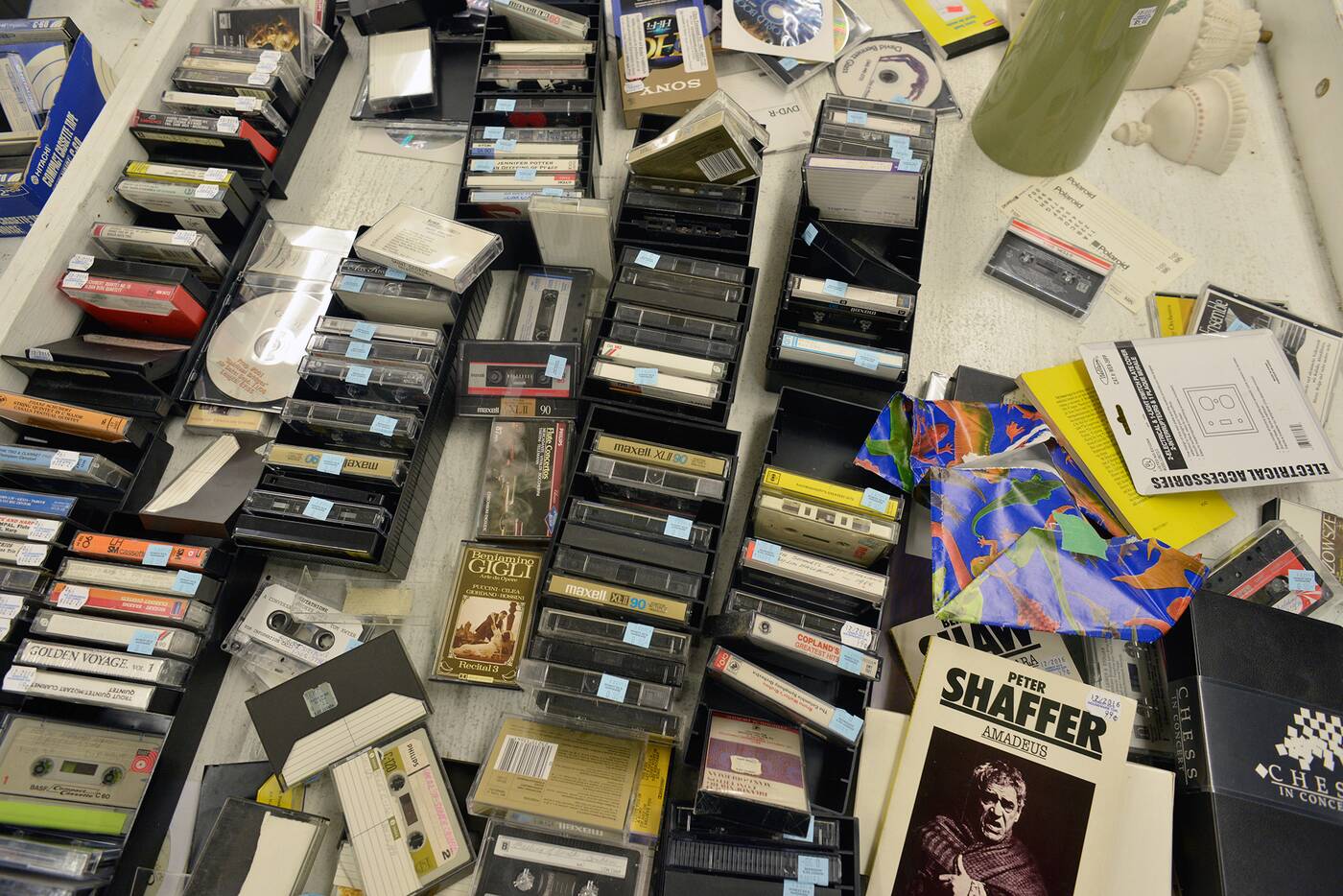 Truth be told, the interior of the store was never much to look at, even as its snaking aisles promised a deal or two on some item that you were sure to pay more for somewhere else. The gaudiness just seemed more fitting when there was an array of bins filled to the brim with "fancy panties," "fashion pants," and "men's classic sweaters." 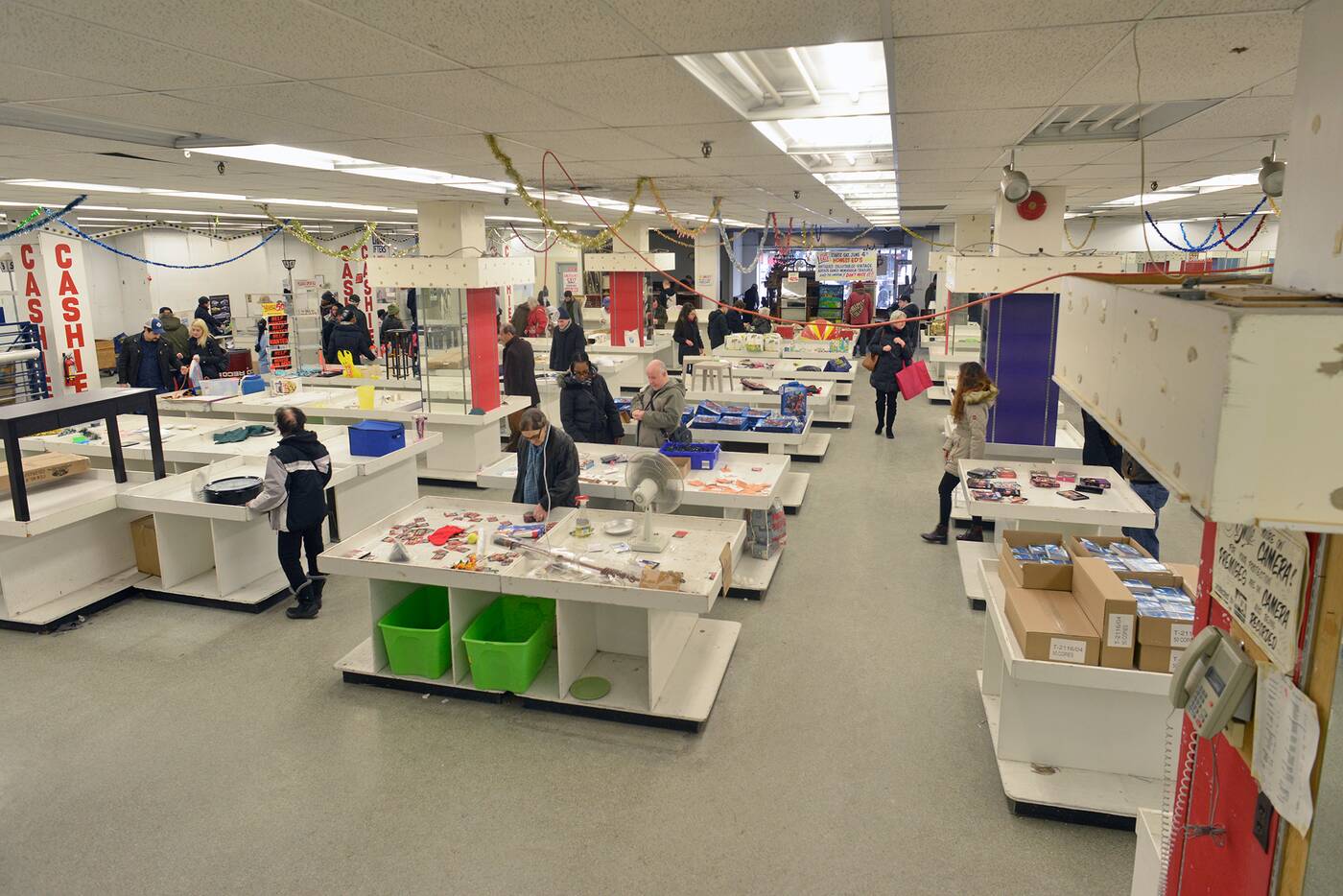 The last bit of retail activity here is a collision between nostalgia and commerce. You can still buy one of the hand-painted signs, though the quirkiest ones have been snapped up. Small versions will run you $12, which isn't exactly bargain basement pricing considering thousands still remain as the store lives out its final hours. 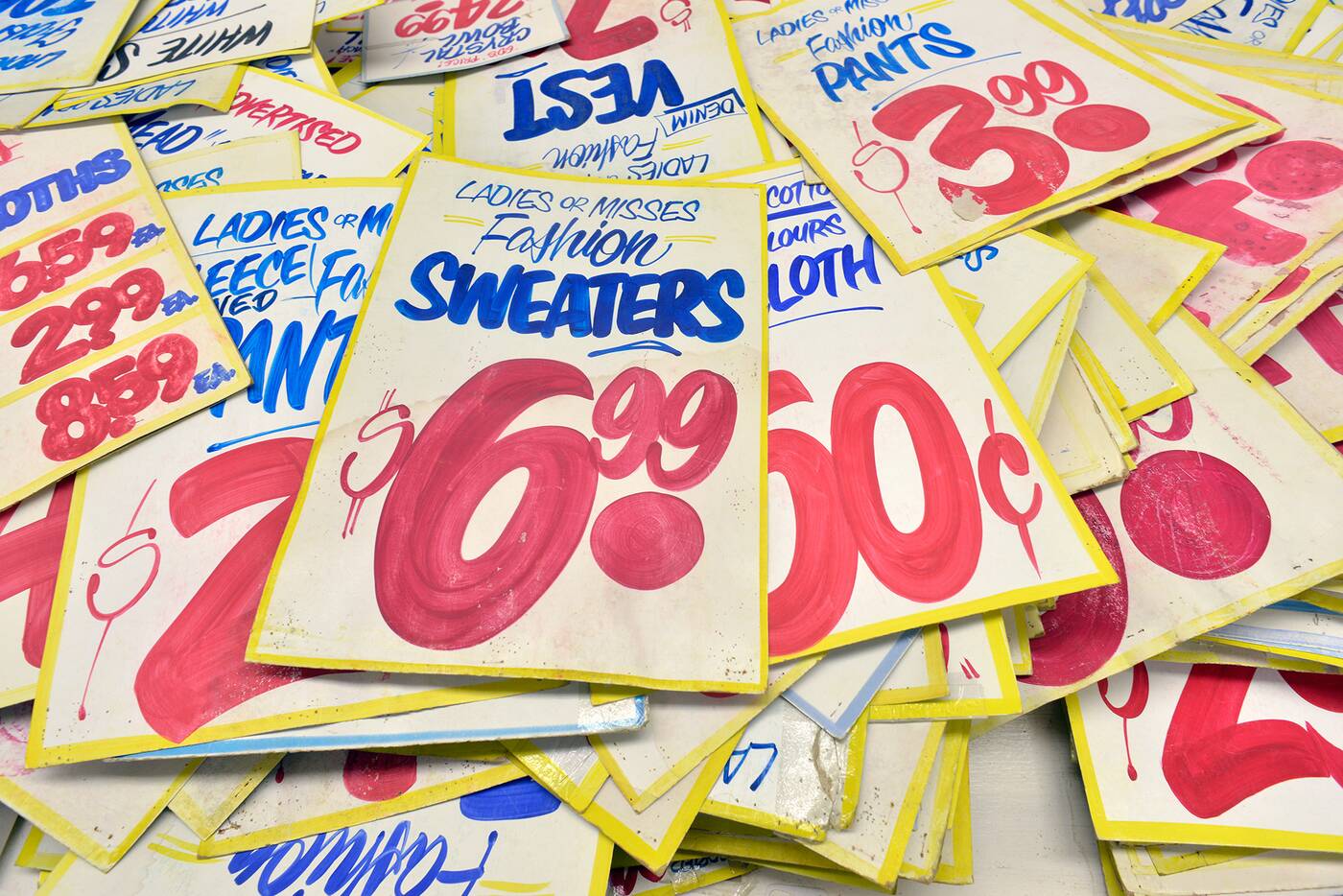 Still, the pull to own a piece of this place is strong. So many of us remember shopping here at one point in our lives, often because we didn't have much money to spare. There's a shared experience in that economic reality that activates powerful feelings that extend beyond merely personal narratives. 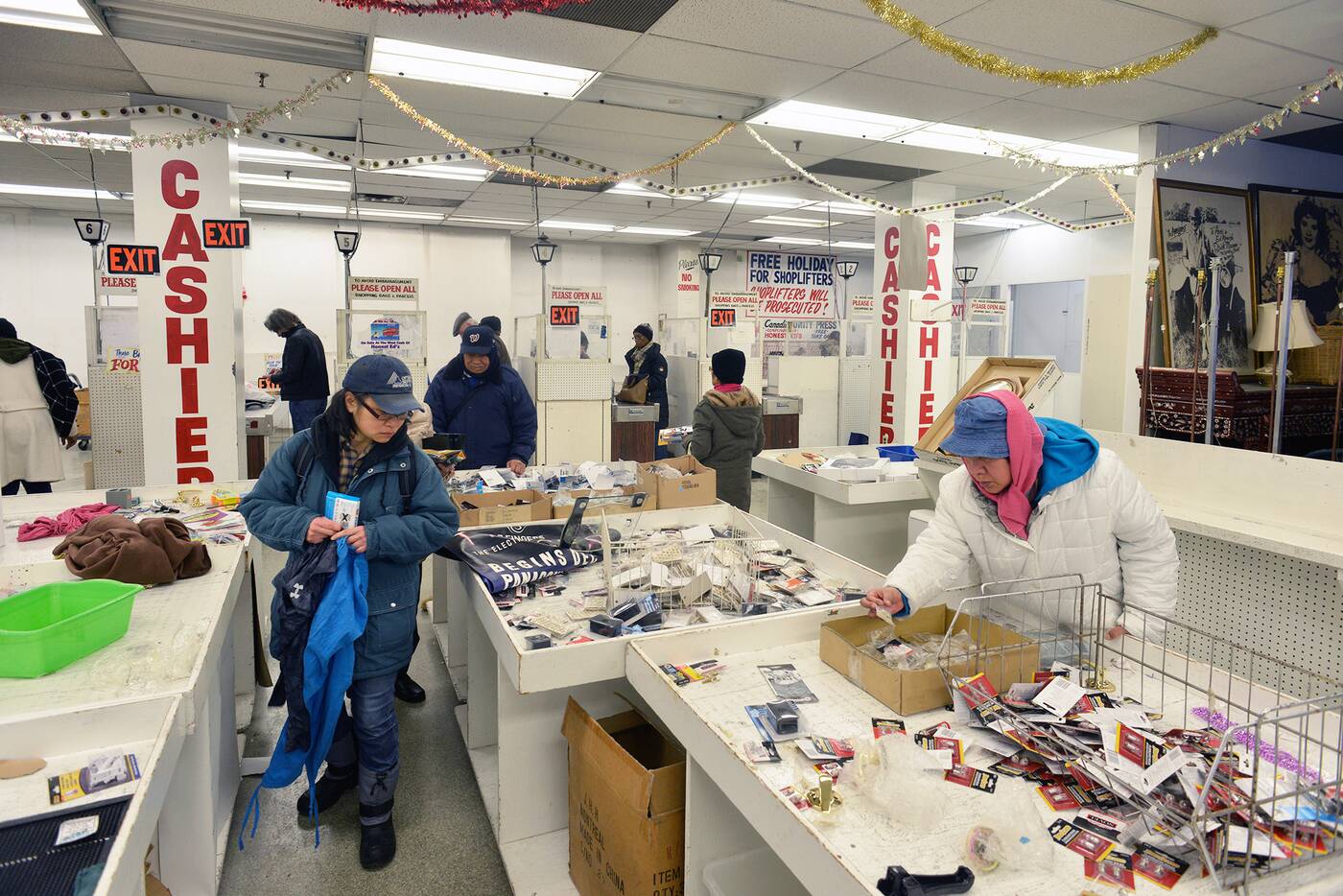 This is how a tacky discount shop became so important to us, and why the last days here feel like a wake. And not just for the store and what it represents to Toronto, but also to the versions of ourselves who shopped here before our families made a bit more money, if indeed they did. 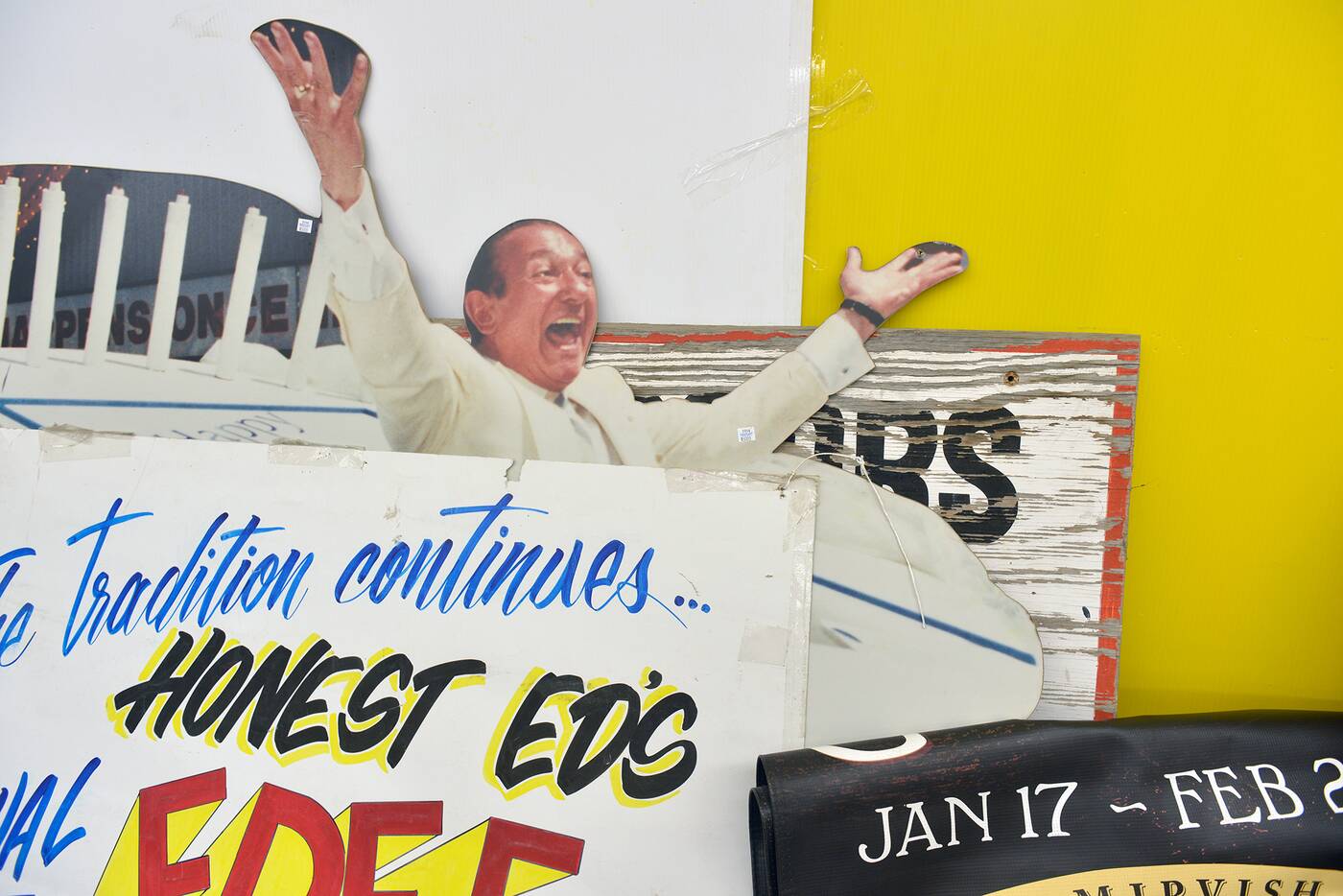 For a particular generation growing up when the store expanded in 1984, a trip to Honest Ed's was one of the earliest memories of navigating the city. The dazzling, light bulb-adorned sign made an impression. It still does. 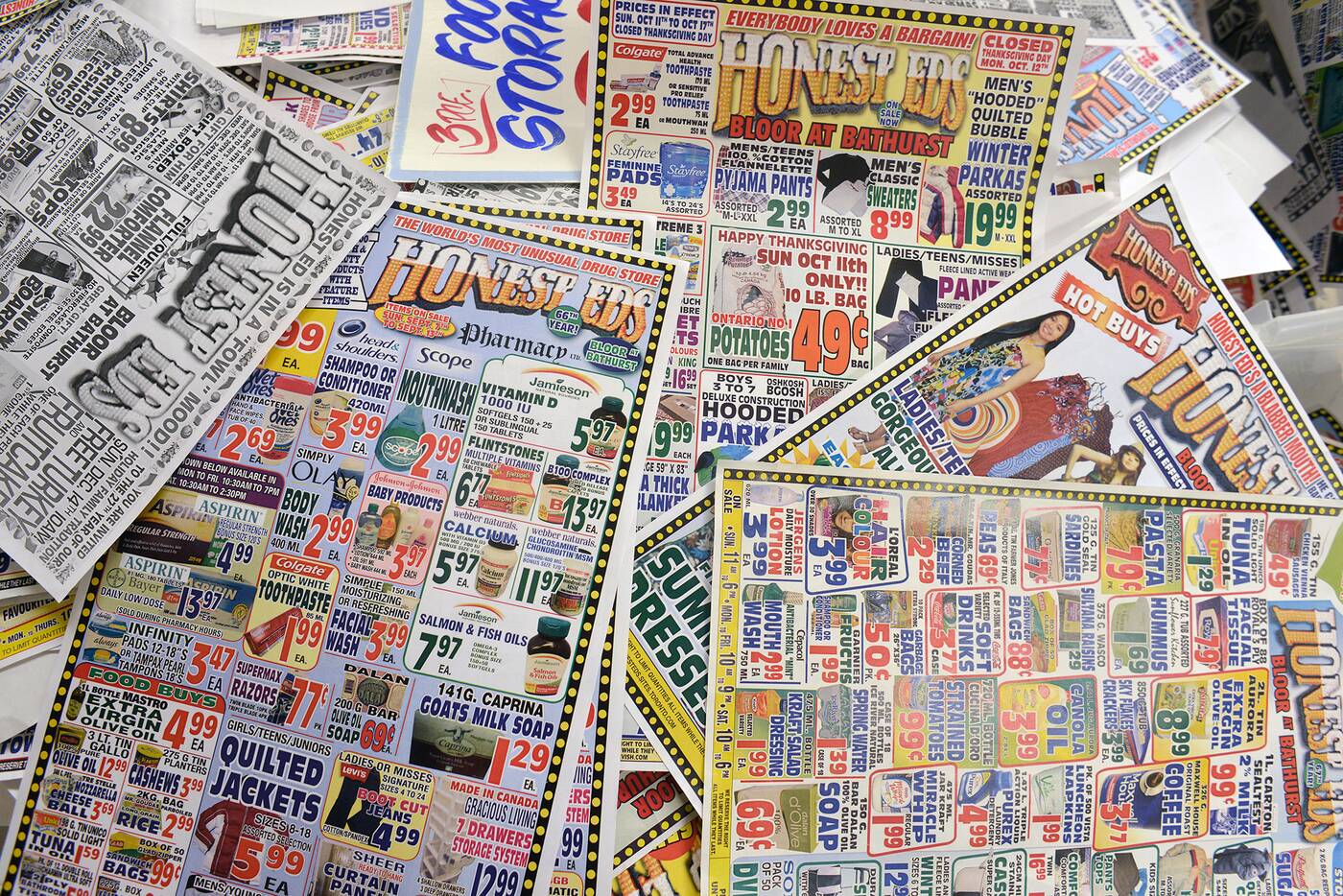 One woman taking a last look today explained to me that the store was still mostly full just a few days ago. When I asked one of the staff members when it was all removed, he explained that many of the items were bought up when the prices were wildly reduced after Christmas. 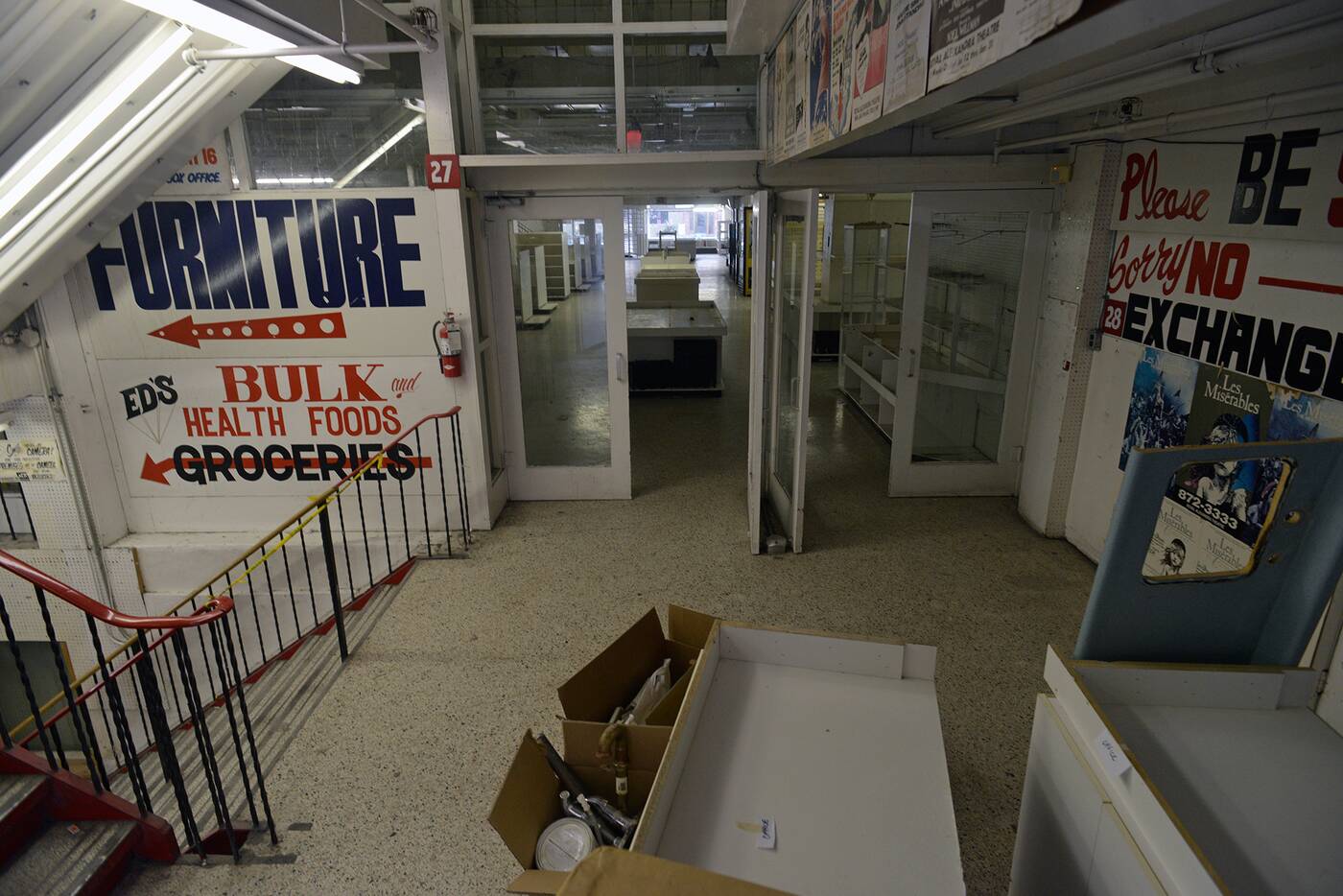 Honest Ed's never ceased to be useful, as new generations wound through the maze-like store for their various household needs and inexpensive clothing. Judging by the diversity of the crowd in the emptied out space today, its appeal and importance extended beyond the sentiment of those taken by its kitschy architecture. 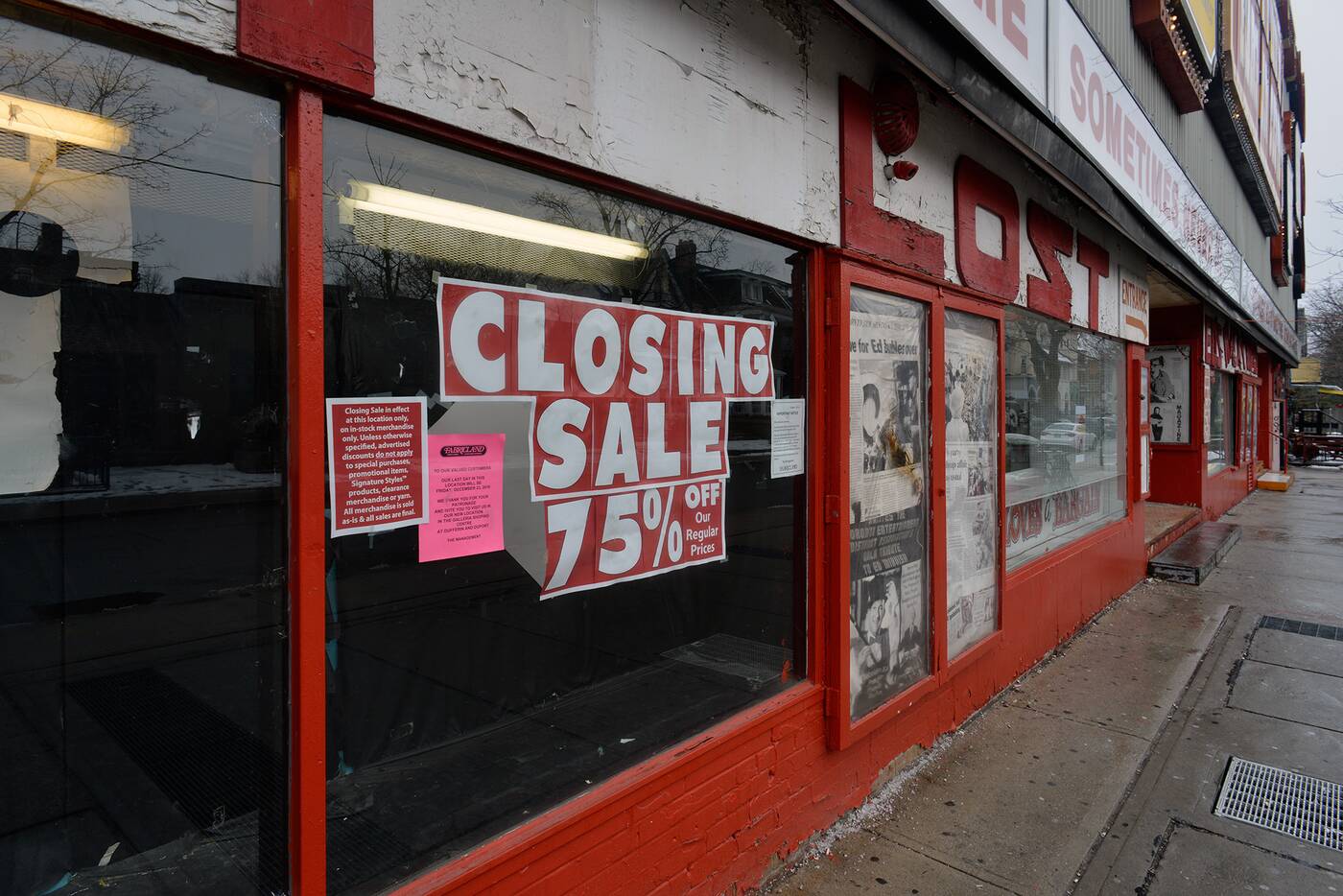 It's already strange to walk along Bloor and Markham streets beside the hollow display windows and the vacant shops of Mirvish Village. While there's a grand artistic send-off planned for the store before it closes its doors forever, the beginnings of the hole its absence will leave is starting to come into view. 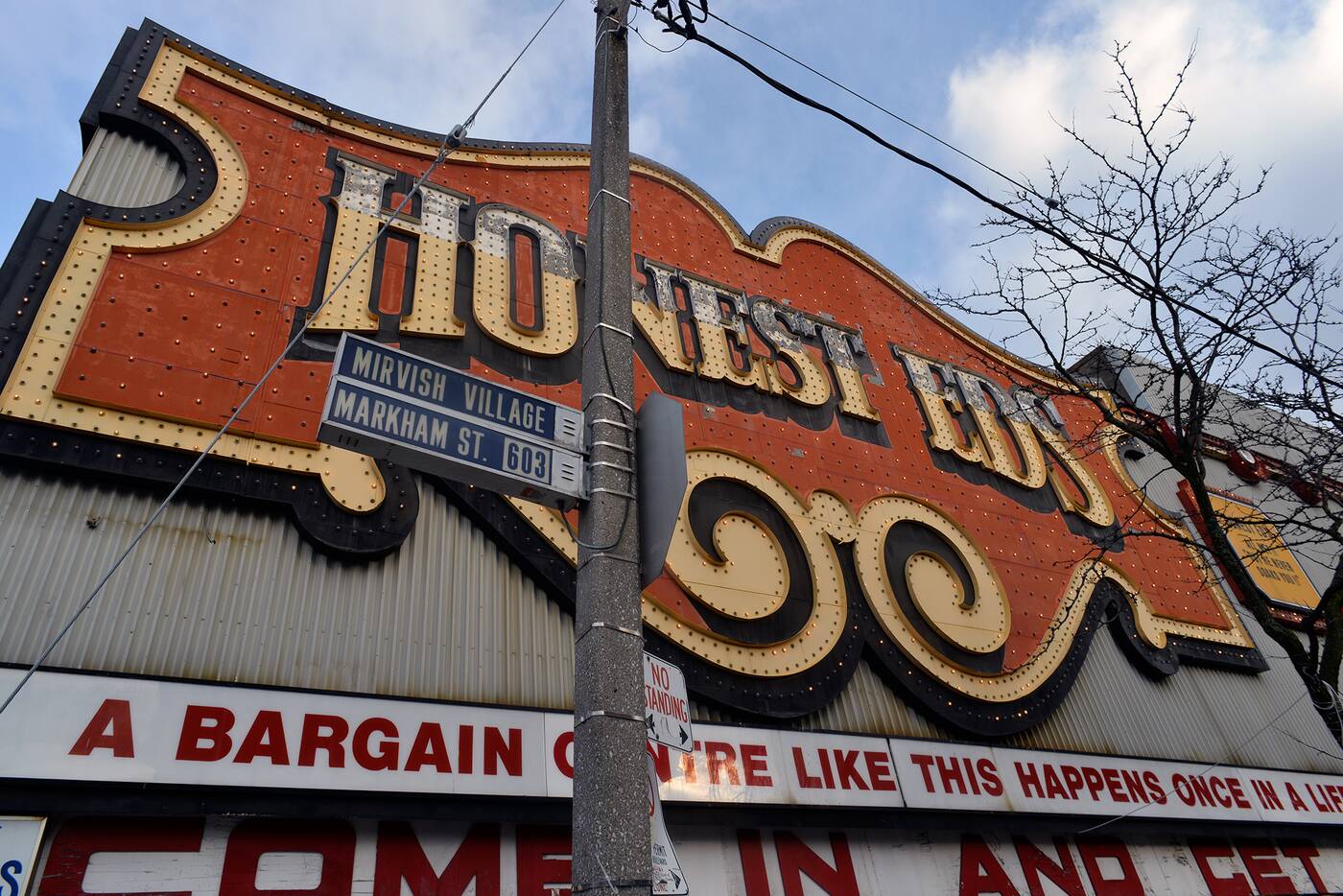 The garishness of a place like Honest Ed's ceases to have charm when the people go away. In the blink of an eye, you notice the broken light bulbs, the crumbling facade, and the dirty film that coats the interior. 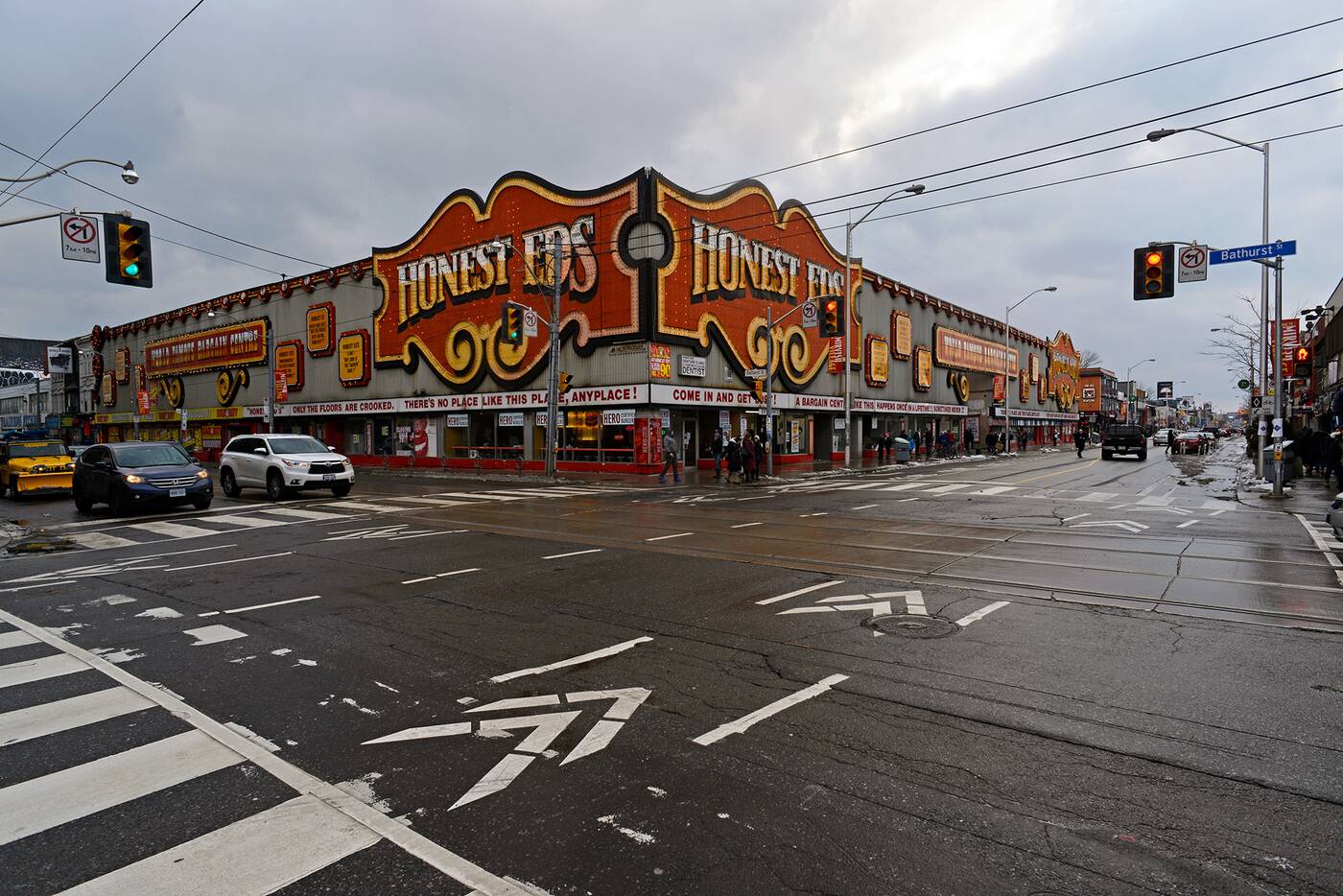 That hasn't happened fully just yet â there's still plenty of activity for now â but those making last minute visits should be prepared for glimpses of this plain truth. Once the greatest of the Toronto discount shops, Honest Ed's is now an ostentatious cenotaph.

Leaving the store today for what's likely my last time, I couldn't help but feel ambivalent about the adage printed on employee t-shirts: "Never before and never again."

The future has already arrived here.