Toronto's St. Lawrence Market is a popular local spot. Both tourists and locals flock to this food palace that National Geographic once rated as the best food market in the world. But the restaurant owners on the adjacent Market Street tell a different story about the neighbourhood.

A few weeks ago, Italian eatery Cresta shut down, so we decided to speak to its neighbours to see what it's like running a restaurant in the shadow of one of the most well-known foodie destinations in the city.

Aly Somani, who recently took over My Market Catch from Tom Antonosakis, has a unique perspective because he also runs Busters Sea Cove, which is inside the market.

"It's kind of like a different world even though they're right beside each other," says Somani, noting that many of the people who flock to the area want to eat inside the market; being beside it is both a blessing and a curse.

"You're kind of competing with inside," he continues. "You get a lot of spillover, which is great, but you know, it's still not considered the St. Lawrence Market, which makes things tougher." That said, by having a popular spot inside the market, Somani can send customers over to his restaurant - and he does, especially when people are looking to eat around 6 p.m., when the market closes on weekdays.

Some of the buildings on Market Street are nearly 150 years old and like the rest of the area, they're heritage designated properties. In 2010, the late Paul Oberman from Woodcliffe Landmark Properties came up with a plan to revitalize the street. After he passed away, his wife Eve Lewis took over the project. The restaurants moved in and opened in spring 2014.

Lewis continued to manage the properties along Market Street until earlier this year, when Woodcliffe sold its properties on the historic street. Now there's a new landlord in place.

Market Street served as a model for the city about how to create "flexible urban streets" that change their configuration seasonally - this means the restaurants all get big patios. When summer ends, however, it's more difficult to attract diners to the street.

"There's no foot traffic there, only in the summer there is," says Aras Azadian, who's behind the Barcelona-inspired Barsa Taberna. 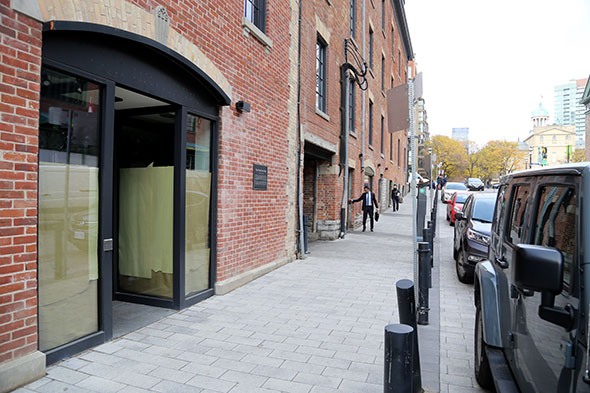 "Our rent was just so excessive that we at times considered going out of business as well," he says. "But we continued to work on ourselves, on our brand, on our menu, on our wine list, on our management and we consistently improved our operations, and I'm happy to say we're a sustainable business."

Azadian, who has a background in marketing and management consulting, says the restaurants all work together - along with groups like the BIA - to start initiatives such as Tastes of the Market in order to raise the street's profile. But some issues persist.

At night, for instance, Market Street looks rather dark and unfriendly. Because of its heritage status, it's not always easy for the restaurants to add new types of signage or outdoor lighting to brighten it up.

"The streetscape was represented in such a way that was much more aesthetically pleasing and much more complete than what it is now," says Ian Paech who owns Evolution Food Co. But despite the challenges, he notes he has a consistent customer base looking for fresh and healthy prepared food.

"But in general when you walk down the strip on a Sunday night or a Monday night [when the market's closed], it's kind of dead."