The completion of the Canadian Pacific Railway remains one of our country's most definitive acts of nation-building. Snaking across the better part of Canada, this critical piece of transportation infrastructure conveys people and goods and drives economies.

It also reflects one of the core stories we like to tell about our national identity: that in spite of its sprawling expansiveness, Canada is a connector, a country that unites diverse peoples across diverse geographies.

Like elsewhere, Canadian cities have grown up and expanded around rail tracks. But this has also created a problematic legacy from an urban planning and design perspective. The downtown cores of metropolises like Toronto and Vancouver are lacerated by transit infrastructure that bisects valuable swathes of real estate and compromises people's experience of their cities at grade. 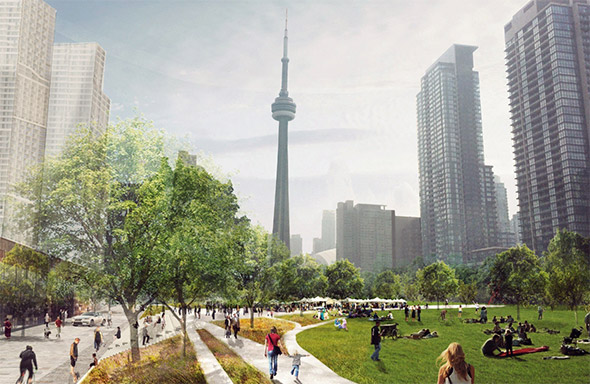 Cue the Rail Deck Park. A few weeks ago, Toronto Mayor John Tory, flanked by Chief Planner Jennifer Keesmaat and Councillor Joe Cressy (Ward 20), dropped an unexpected -- and unexpectedly inspired -- announcement: the city's intention to protect 21 acres of space in order to create a legacy park that will blanket the CN rail corridor between Blue Jays Way and Bathurst Street.

The idea comes courtesy of TOcore, a city planning initiative tasked with studying the densification of downtown Toronto and developing strategies for new infrastructure that redresses the physical and social strains arising from vigorous intensification. 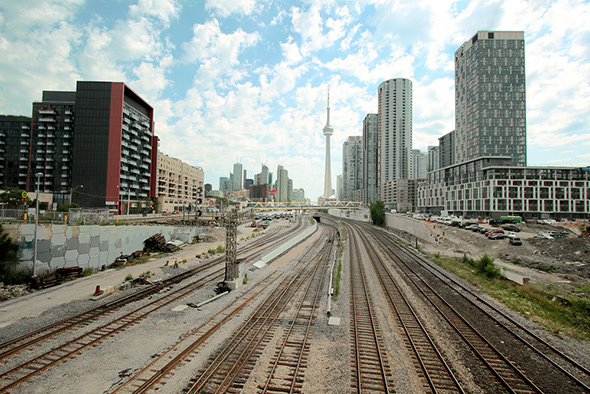 Taking a page out of Chicago's playbook, TOcore put forward a concept that corresponds closely to the Windy City's beloved Millennium Park. It has been met with predictable scepticism; people have criticized it for being frivolous and premature insofar as it lacks a financing plan, timeline, and concrete course of action.

It has also been hailed as Toronto's opportunity to make a grand public realm gesture Ă la Central Park, betraying yet again our longstanding obsession with comparing ourselves to our more populated and accomplished urban frenemy to the south. 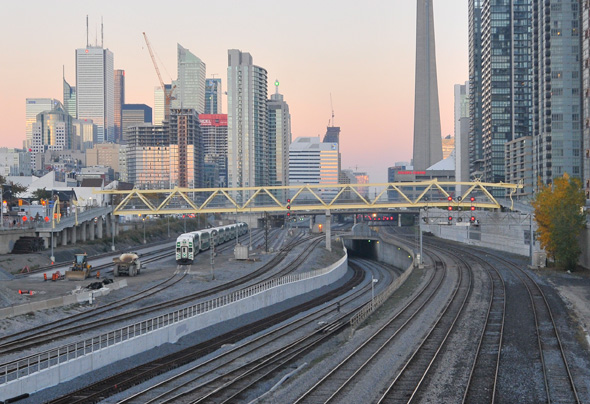 Of course every city should be so lucky as to have a Millennium Park, Central Park, or High Line, let alone something as unusual and inventive as Osaka's Namba Parks. These natural spaces engage with and incorporate the built environment in ways that have been game-changers for citizens as well as tourism (a calculus, one might add, that cannot be underestimated). 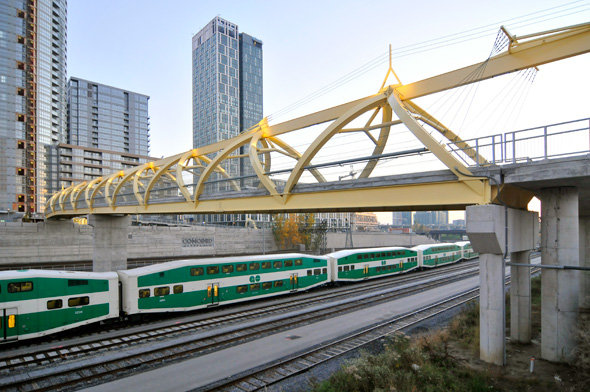 It's about the leap of imagination required to build something so extraordinary, it will resonate in people's minds for hundreds of years to come. It's the chance to be ourselves because this site's reality is uniquely ours to solve in a way that can only distinguish Toronto for being Toronto.

If CP Rail helped build a nation, the Rail Deck Park represents an unparalleled city-building moment, an urban intervention whose design ambitions have the potential to outstrip anything this city has ever done. So what do we need to do to make sure we get it right?

1. Launch an open design competition to attract the best talent

Canada tends to espouse a conservative competition process that usually precludes emerging practices, for example, from meeting the criteria. Let's emulate the Europeans and get more creative about how to cast a wider net that encourages the best design minds to throw their hats in the ring. 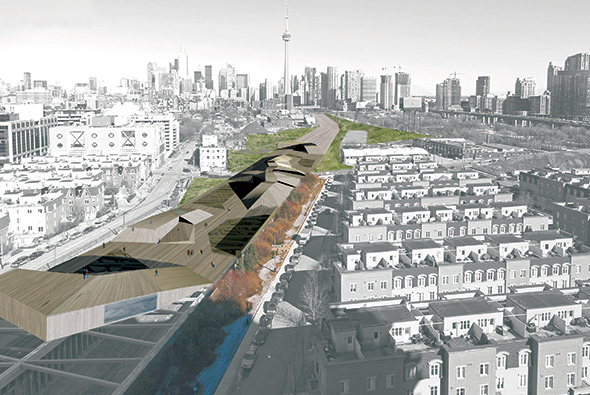 2. Ensure transparency with respect to funding, process, and project leadership

It goes without saying that a project of this magnitude will require tremendous will, significant stakeholder buy-in, and bags of money. Unfortunately, the public realm has all too often been shaped by the interests and motivations of private parties.

Private money will undoubtedly be required; however, private stakeholders should remain accountable to a public process guided by a team of qualified city planners and officials, architects and landscape architects, developers, urbanists, and community members.

Which begs some questions: What was the genesis of TOcore? Who sits on the committee? How and when was it assembled? Does it include people who are not city officials? Will TOcore administer the competition?

And who's the "artist" who rendered the drawing? We applaud Tory, Keesmaat et al for running with this, but greater transparency about how this process is unfolding internally at the City is critical. 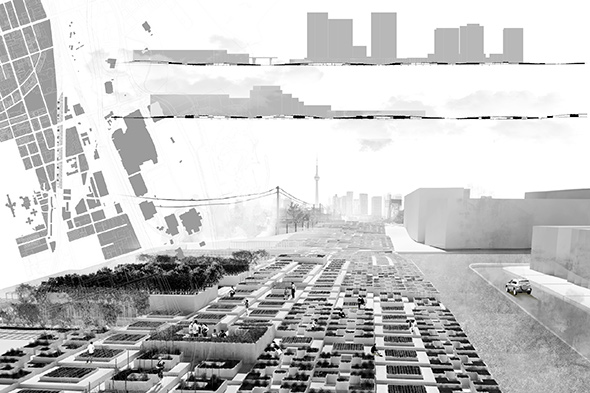 Even though we love to hate the Gardiner Expressway for, among other things, slicing off the waterfront from the rest of Toronto, a thickly braided tangle of rail tracks that cuts across the entire city poses a similar, if not even greater, pedestrian challenge.

Overpasses like the Bathurst Street Bridge are a missed pedestrian opportunity. One need only look back to some of the world's oldest bridges, like Florence's Ponte Vecchio, for inspiration for how to design and program a beautiful, serviceable, hybrid piece of infrastructure.

If we're going to paper over the tracks with a grass-encrusted platform the size of 16 regulation football fields, we need a creative visioning process that asks tough questions to unearth truly interesting potential uses, be they athletic, cultural, horticultural, culinary, and/or institutional. 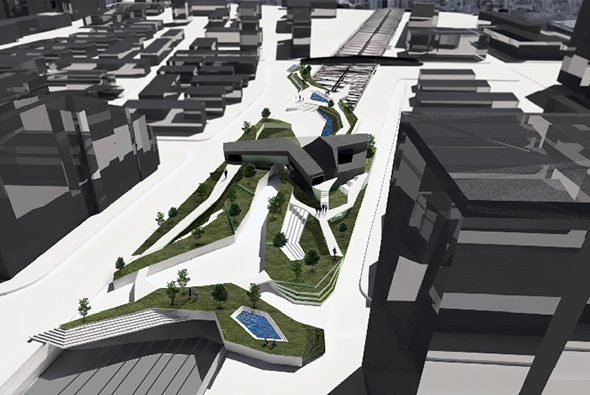 4. Build more than a park -- build a neighbourhood

In order to supercharge the public realm within the condo core, we can't just build a green apology for our underwhelming high-rise architecture, i.e., plant some new trees, carve out a few swoopy paths, and designate an area for a weekend farmer's market.

Millennium Park is wildly popular precisely because it's a departure. What are the unique conditions and opportunities in and around these 21 acres that could support new landscape and architectural typologies?

Let's design something that goes beyond the predictable and performs at a level that truly matches the ambition of what's being proposed.

This means rewarding a team who will: 1) conduct research to help distil a responsive and imaginative vision that will inform design and programming; 2) thoughtfully interpret how the park's edges will interface with the existing buildings, locality, and retail; and 3) develop novel architectural typologies that set new standards for public realm projects.

The Rail Deck Park should reinvent how the built form and green space can intersect to create a 21st-century social condenser. 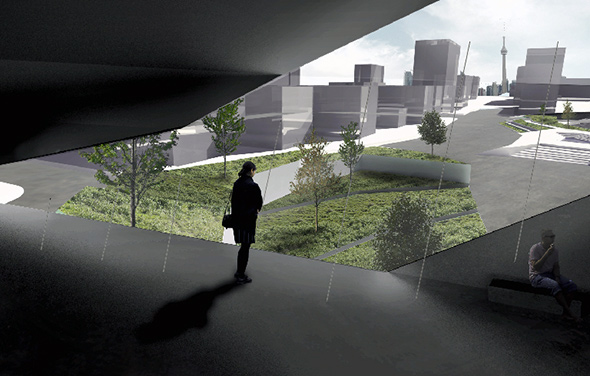 5. Consult with the next generation of designers, architects, and landscape architects to forge a vision for the next 100 years and beyond

Over the last four years, Partisans co-founder Alex Josephson has been teaching an upper-year studio course at the University of Toronto that searches out under-utilized lands and missed opportunities in urban infrastructure. One of the sites his class consistently studies is the Strachan Avenue Overpass grade-separation project, a site just west of the proposed Rail Deck Park.

The exercise asks students to contemplate how a piece of infrastructure can extend beyond its ostensible purpose and perform triple or quadruple duty. His students have in fact come up with similar ideas to the Rail Deck Park, but have already gone further to propose inventive architectures and dynamic cultural programming.

These aspiring designers should be invited to the table and consulted. And not only to think big about the Rail Deck Park, but to think even bigger. Twenty-one acres is a start, but why aren't we considering the Rail Deck Ribbon, a multi-decade, long-game vision for a landscape architecture project that extends the whole length of the city's tracks?

Let's enlist the next generation to push us even further outside our comfort zone to make sure we aren't just creating a signature park, but a legacy that will outlive us all.