These are the three blocks that Bloor forgot

You could make an argument that Bloor is Toronto's most vibrant street. Sure, it would have to compete with a few others like Yonge and Queen streets, but the array of small businesses, restaurants, and bars that stretch from Avenue Road to Islington Avenue give it great energy.

What's also remarkable about the street is that its retail face remains consistent for much of its length. With a few exceptions like the Mink Mile and the section east of Yonge, Bloor is marked by two and three storey buildings that feature retail at ground level and apartments above. It serves as the main retail strip for at least seven distinct neighbourhoods. 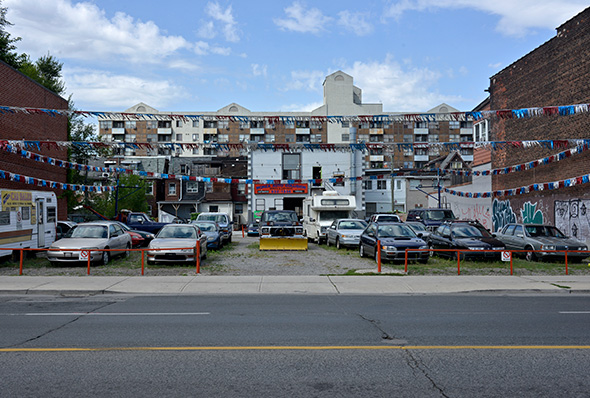 Caught right in the middle of all this hodgepodge urbanism, however, is a section of Bloor that's completely lacking in character. Once you pass St. Helen's Avenue heading west, it's as though you've entered as sort of no man's land, where the retail vanishes and attention to the human scale of the street is forgotten.

This continues until Symington when a little cluster of businesses restores some humanity to the street scape. After that, it gets a bit cold and dreary again leading to the hulking Crossways Towers, but never quite so much as the stretch between St. Helen's and Ruttan Street. 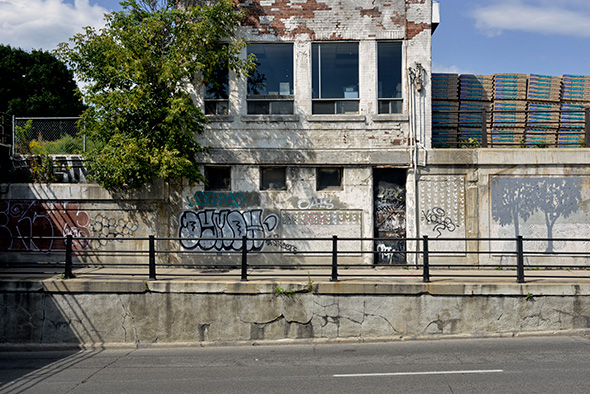 I've passed through this stretch hundreds of times, and it always dampens my mood momentarily. It's ugly, yes - but the real issue is that it's entirely anonymous. It feels like a slice of Toronto that's been forgotten, where the lesson that cities are for people was never learned.

The most obvious contributing factor to this sense is the one that makes the least sense to complain about. A railway spur passes overhead here, and the space that's been dug out underneath it can't accommodate retail. But there's more to it than that. 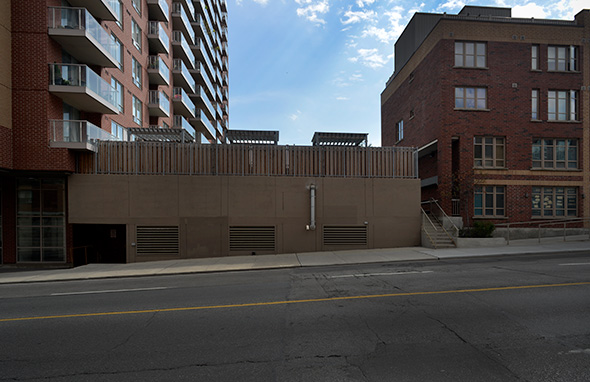 Just west of the bridge on the south side is the BeBloor condo, one of the city's ugliest buildings (a point Star architecture critic Christopher Hume agrees with). At a passing glance, it looks like a 1970s-era slab apartment building, but it was actually built in 2006 by the Lorbeth Development Corporation.

As bland as the whole structure is, it's the street level entrance that's really unforgivable. Given how utterly lacking in any attention to design it is, the thought has crossed my mind that the whole condo is actually just a front for some secret government facility or another. It's that bad. The ventilation ducts facing the street are also a nice touch. 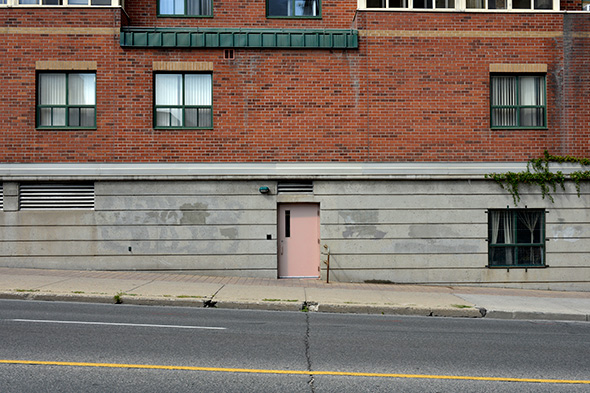 Across the street, the scene is no better. Here Bloor is marked by the back side of the Rankin Apartments, which features more ventilation ducts, a single pink door, and three windows at street level. The rest is concrete.

It's a suburban style apartment with its back turned to one of the city's busiest streets. Developments like this are why we now have the Design Review Panel.

The scale of buildings diminishes as you continue west, but the streetscape never enlivens. Brick townhouses don't seem like they should be so foreboding, but these ones are. Pushed right to the edge of the street, they amount to a wall of brick and glass, and seem perpetually unoccupied. 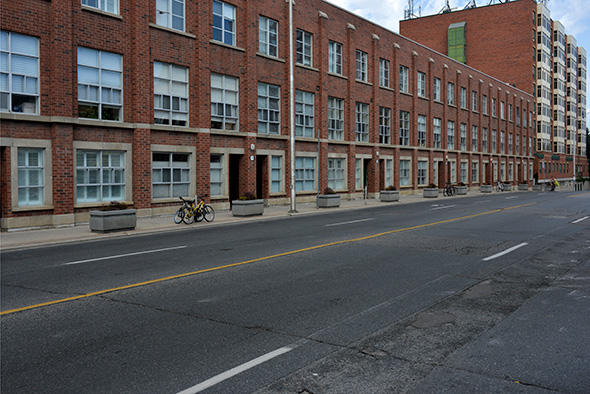 By the time you reach the auto shop at Ruttan, you're just happy to see signs of activity on the street. It feels like you're back in Toronto again, even if only because the buildings look like people actually use them.

There's no requirement that all of Toronto be pretty. Practical considerations dictate that some areas will have a utilitarian aesthetic, but this stretch of Bloor is a lesson in poor planning, where a challenging feature in the railway overpass led everyone to give up and say "who cares?"