Toronto's burgeoning density is mostly a very good thing. Tall buildings in the core of the city make for a more prosperous and animated place, and it diminish the infrastructure strains related to urban sprawl. But for all the positives to found in a rapidly intensifying city, not every proposed development will make sense.

Take, for instance, a new proposal for an 80-storey condo at 8 Elm St. Located just steps away from Yonge and Dundas, there's not much of an argument to be made that the neighbourhood isn't suitable for large scale residential development, but the actual site in question is a bit tricky.

As is the case more and more often these days, this monster tower is proposed on a strikingly small site, which would make this one of the most densely developed plots in the city should the project be approved as proposed. Due to the size of the site, the condo has been pitched with zero parking spots.

The designated heritage building currently on the site would be preserved, though it's facade would be disassembled and rebuilt as part of the construction process. Towering above the historic James Fleming Buildings, the condo dwarfs the existing structure in almost comic fashion. 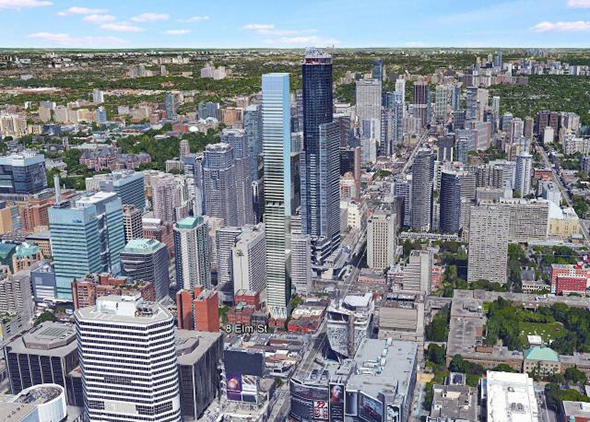 That's where the heritage concern comes in. While the Fleming Buildings would mostly remain as part of the new building, Elm St. has a unique character that would be jeopardized by this behemoth. As the heritage report puts it:

"The height of the proposed development will introduce a new character on the portion of Elm Street characterized by low to mid rise heritage buildings... This portion of the street has retained its historic character, notable by the buildings dates of construction, materials, heights and commercial, institutional uses found on the north and south sides of Elm Street."

The report also notes that the setback of the southern side of the building will mitigate this effect, but that's also the cause for another problem. Because the site is so narrow, the proposal only calls for a significant setback on the one side, which means that the north part of the building would be only 13 metres from the sprawling 74-storey tower proposed at 33 Gerrard St. West. 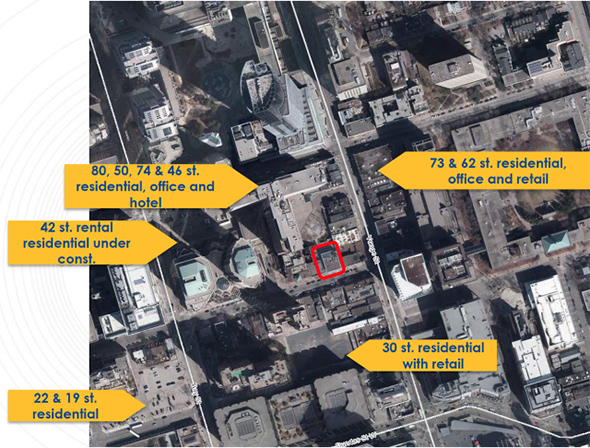 City of Toronto guidelines call for at least a 25 metre separation between towers of this size, which will certainly be an issue as this proposal goes through the evaluation process. The area already boasts one of the city's tallest buildings in the form of Aura, and was already set for radical intensification prior to this development.

There are 500 storeys of residential and commercial development on the table in the immediate vicinity, a staggering number that's caused concern among local residents and area councillor Kristyn Wong-Tam, who met last week to discuss the project.

Can the area -- and Toronto in general -- sustain this much density seems a reasonable question to ask when thinking about this condo.