Toronto is brimming with "new neighbourhoods," many of which have been bestowed by developers and real estate groups looking to brand an area in an appealing way. Some of these are generally good (e.g. Bricktowne) and some of these are rather unfortunate (e.g. Lower East Side).

In addition to the news regarding MOCCA's rebranding, it's been interesting to note that the area surrounding the new home for the art space is being referred to as the Lower Junction more frequently. This, no doubt, is on account of the development project known as Lower JCT. in the area surrounding Tower Automotive, the future home of MOCA (now one "c").

Technically speaking, this area is very firmly a part of the Junction Triangle (in fact, the footprint of the neighbourhood relies on this area for its wedge shape). What might be happening, however, is the birth of a micro neighbourhood. 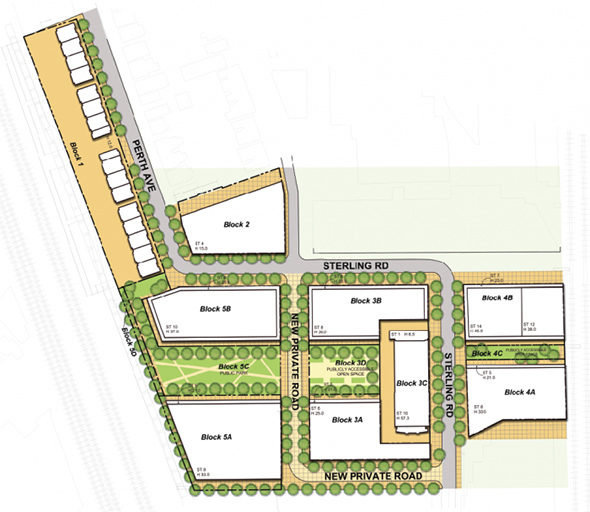 I'm thinking of a place like Riverside, which is broadly a part of Riverdale but has established its own identity as well. Five years ago, people used to refer to Dundas West as a micro neighbourhood within Little Portugal, but it's taken on its own life since then for various reasons, not the least of which is the slow erosion of Portuguese businesses on the street.

If it catches on, the Lower Junction would be more like Riverside - still a part of the Junction Triangle but recognized for the hub of activity that will ultimately surround MOCA in the years to come. It's already started to happen with a host of art galleries and breweries in the area with more on the way.

Besides, standing at the intersection of Sterling and Perth, it feels like a very different place than, say, Dupont and Edwin. One gets the sense that Bloor acts as a dividing line between the mostly residential portion of the neighbourhood to the north and the former industrial lands to the south.

Lower JCT. is the name Castlepoint Numa has given to its large-scale mixed use development near Tower Automotive. That doesn't sound like a neighbourhood name to me with its capitalized branding. Lower Junction, on the other hand, might just have some legs.

What do you think? Let us know in the comments.