An insider's guide to the secrets of the TTC

For those willing to look beyond the superficial, there's a wealth of interesting things going on within the Toronto transit system. The strange symbols on the platform walls, the classical music over the public address system, and the mysterious bricked up stairs at Bay station all have a meaning and a purpose.

Here are 5 secrets of the TTC explained. 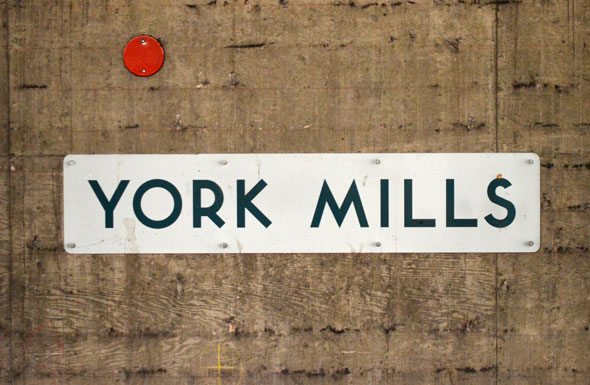 Platform symbols
Every Toronto subway station has a variety of coloured tiles stuck to the platform wall. There are red, orange, and green circles, and a green triangle. Located at the far end of the platform near the exit tunnel, the red circle is used by drivers to situate the train in the station. Further down, the green circle should line up with the window of the crew member in charge of opening the doors.

TTC staff aboard the new Rocket trains look for green triangles instead of red and green circles because the driver and door controller are located in different positions. The orange circle is supposed to be the last thing the door operator sees upon exiting a station: staff are trained to look back along the platform to ensure all passengers are safely clear of the train.

Classical music
In 1998, after a fatal stabbing at Kennedy station, the TTC began looking at ways it could politely discourage nefarious youths from hanging around on its property. Studies have shown that piping classical (or any uncool) music over the public address system reduces dopamine levels in the brain, subtly encouraging young people to move on. Over the last 16 years, the TTC has expanded the classical music scheme to eight stations, most of them near schools.

PA codes
"506 Broadview, 506 Broadview. Please call control" or recorded messages just like this frequently echo down the corridors of subway stations. As in large properties like hospitals or stadiums, TTC transit control uses its public address system to page employees. The complete list of codes is lengthy and exhaustive, but it includes janitorial requests (505 and 506,) calls for help from the fare evasion team (157,) and landscaping foreperson. Even the "track lubricator" (707) and chief operating officer (126) have their own dedicated numbers. 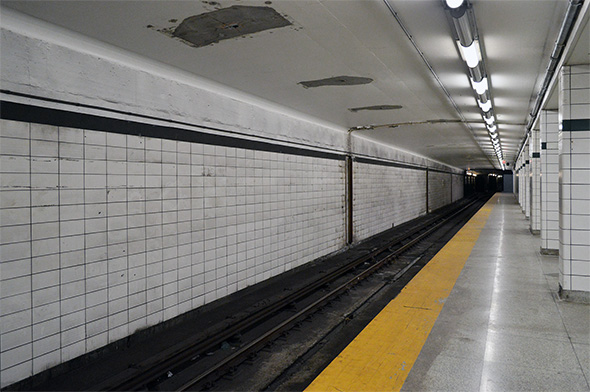 Disused stations
The stairs have been blocked off, but there's a disused pair of platforms beneath Bay station. When the Bloor-Danforth line opened, trains were configured to run from Woodbine and Keele (the original east and west ends of the line) downtown via Union to Eglinton using a Y-shaped intersection beneath Avenue and Bloor. The configuration didn't last, however, and the downtown platform at Bay was closed. An unfinished underground streetcar stop beneath Queen station is also sometimes counted as an abandoned station. 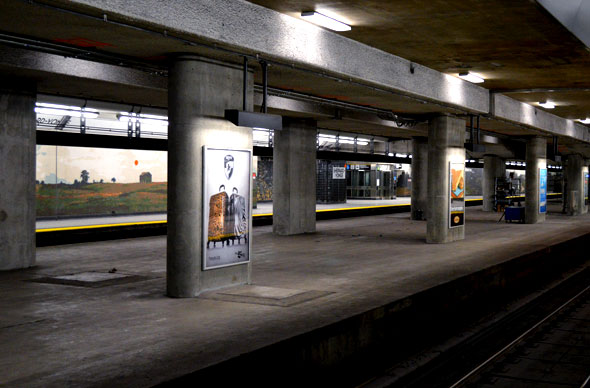 Spare platforms
Had the Sheppard line been built west to Downsview station as was once planned, the half complete spare platform at Sheppard-Yonge station might be used by passengers today. Instead, the concrete shell sits unused between the station's inbound and outbound platforms, awaiting additional ridership.

Busy subway stations that have both side and centre platforms are able to handle a greater numbers of passengers by having people enter and exit through separate doors. Unfortunately, Sheppard-Yonge isn't one of them.