Is Toronto's air-rail link the priciest in North America?

Well, it's not as if we didn't see this coming. In a city with one of North America's most expensive public transit systems, taking a train to the airport was never likely to be a bargain. Torontonians have long been used to reaching for their wallets when it comes to transportation.

After all, if taking the former airport-downtown express bus cost much more in Toronto relative to other cities, the chance of any new rail link in this town being truly inexpensive was never very good. From the very beginning of the Union-Pearson Express (UPX) project back in 2003, fares of $20 were hinted at.

Per yesterday's announcement from Metrolinx, it appears the actual fare to ride the rails to Pearson in 2015 will be very close to that original, er, vision. Adult one way fare will be $19 for PRESTO-equipped area residents. Tourists in a rush or those not interested in PRESTO will be gouged charged $27.50.

Hmmn. Is this the right price? And how does it compare to airport connections in other cities? The proposed UPX fare is certainly much less than a taxi from downtown to YYZ, and it's not much more than the cost of checking a bag. Good things cost money; what's the big deal?

For one thing the airport rail link project is supposed to replace 5,000 car trips a day. It targets business travelers, but also tourists. If it is mispriced, that projected ridership of 2.5 million per year won't happen. 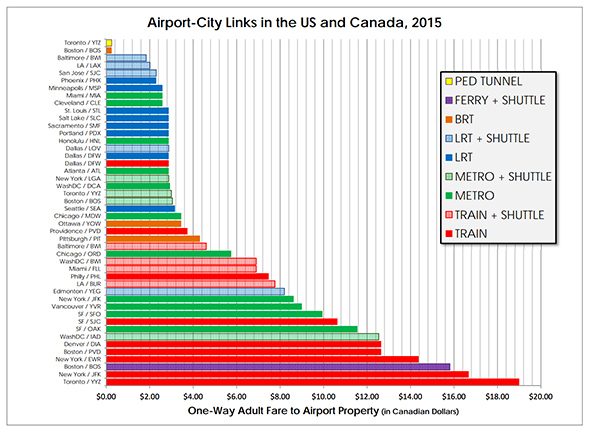 It is also since 2010 a publicly-funded project of the regional transit agency Metrolinx. UPX will cost nearly half a billion dollars to construct. You paid for it, so what you pay to ride it matters.

Much has been made about claims that the UPX is "premium service," that it has no comparable express business-class service on this continent. In a recent Toronto Star article, Transportation Minister Steven Del Duca defended UP Express "as superior to airport transit in other cities." Isn't $19, or even the full $27.50, a steal compared to, say, the $37 Heathrow Express?

This is very much the line that is being sold to many Torontonians, and unfortunately they are buying it. In the fare announcement, Metrolinx was careful to mention airport link fares from around the world of not only Heathrow but also Lyon ($22), Oslo($28), Tokyo($29) and Stockholm($42). Nothing to see here, move along, right?

Let's take a closer look at those supposed comparable services. First of all, Heathrow Express and the other examples cited are, in fact, express. They do not stop between the airport and downtown. The UPX will have two intermediate stops and thus in its operations will be closer to the lesser-known Heathrow Connect. That service takes 22 minutes, makes a few stops along the way, and costs only $17.60 Cdn. Tokyo has a similar less expensive alternate service. So Metrolinx is overstating the true cost of comparable links in London and Tokyo.

It is also worth noting that Heathrow Express was also only created as a super-premium service after a less expensive airport rail service with the London had first been established via the London Underground. This provides relief from the high Heathrow Express fares, an option that will not exist at Pearson Airport.

Yes, there will still be the TTC's Airport Rocket connection to the Bloor subway line, but this is a 7 km, 25 min ride that stretches the definition of an airport shuttle. It also requires exact fare at boarding; hardly simple for tourists to use. What about the cities with express airport trains but few other options?

Stockholm's Arlanda Express and Lyon's Rhonexpress are hardly ideal cases. These projects have been widely criticized for their high fares and low utilization, something blamed on building them via Private-Public Partnerships (PPP). UPX may have started as a PPP back when it was Blue22 under SNC-Lavalin, but Metrolinx took over the project in 2010. It is publicly-owned transit but certainly not priced like it. Oh, and despite their high fares, children ride free in Stockholm and Lyon. UPX charges kids a minimum of $9.50.

Finally, Oslo is often rated the most expensive city in the world to live in, so while its 210 km/h Flytoget train might be very nice, this is perhaps also not the best role model to cite for UPX. 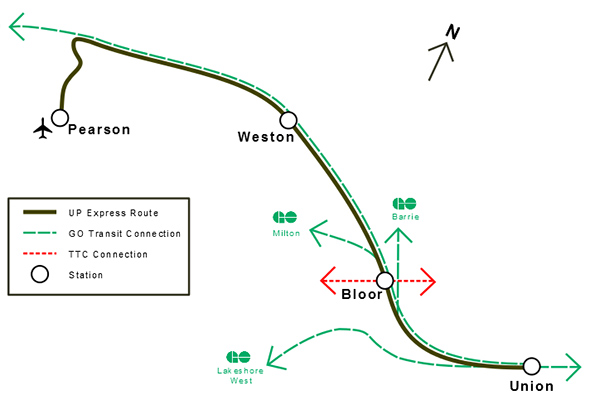 So the high-cost examples trotted out to placate the critics are not exactly as advertised. What about the world's many airport rail connections NOT listed by Metrolinx? Most cost less than the proposed UPX fare. Heathrow and the other London airports are outliers, a fact that has has been widely acknowledged.

The airport train in Hong Kong costs about $14.75 Cdn. Taking the train from Paris to Charles de Gaulle airport costs $13.80. Kuala Lampur's express rail link costs $11.62. In Sydney, the airport train fare of about $15 Cdn sounds reasonable enough, but was considered so "eye-popping" that a government committee recommended it be lowered.

But never mind Europe or the rest of the world. Toronto is in North America, and you will notice Metrolinx did not mention any examples of what it costs to get to the airport on this continent. Why is that? Because UPX is not significantly superior enough to airport transit in other North American cities to justify its steep price.

In the US and Canada, there are now many cities that have airport links operating or under construction involving some sort of rapid transit, be it trains, subways, or light rail. A few more cities use Bus Rapid Transit that runs on a dedicated transitway (much like an LRT line) and one even has a ferry connection. And let's not forget being able to walk to Toronto Island.

All of these connections cost far less than the proposed cash fare of UPX and considerably less than the PRESTO fare. Yes, some of these airport links require shuttle buses, or make more stops, or run less frequently, or provide less comfort, but there are clearly precedents for these kinds of fares, precedents that UPX blows past. At best, UPX is providing slightly better service at a premium price that seems to lack justification.

Let's start with the closest comps, the commuter rail connections. UPX is explicitly not intended for commuters, but will be using typical commuter rail diesel-electric trainsets. While being low-emission, these are hardly any different than those running on commuter lines throughout North America. 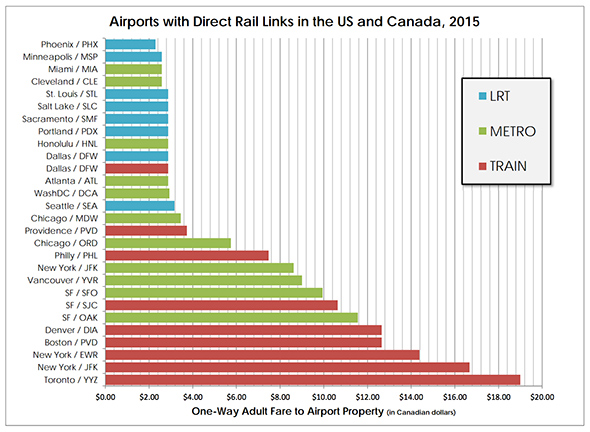 In fact, they are the exact same trains as were bought for a commuter rail system in California. Is there really any comfort difference between riding UPX and riding a shiny new railway carriage out of Boston headed to Providence Airport? Comfortable, direct to the terminal, luggage racks, free Wi-Fi -- sound familiar? The trains that run to the airports in New York, Baltimore, Washington DC, Philadelphia and Denver are also electric, providing an even smoother ride and environmental benefits that UPX cannot match.

Service frequency is planned to be better on UPX than most typical commuter lines that stop at airports, but then again trains running to JFK's terminals leave midtown Manhattan every 5 or 6 minutes at peak times . At the end of the day, heavy rail is heavy rail - there is no functional difference so long as the trains leave frequently enough to be usable for airport connections. Even confined just to this group, UPX costs nearly twice as much for tourists and 15% more for residents than the next most expensive airport train.

Subway (metro) connections to airports tend to cost less than commuter rail. Some systems, like Vancouver, New York and Chicago, tack on extra charges for airport stations but even then their public transit DNA as subway lines tends to keep fares down. A favourite of budget travelers and airport workers, these are far less expensive to ride than UPX while providing more frequent service and a useful tie-in to the regional transportation network. The comfort level may not be the same, and there may be more stops, but the price and convenience is hard to argue as being definitively inferior, and certainly not at a fraction of the fare.

Several airports now have new LRT connections. Of course, Pearson would have by now too, had various politicians not meddled with the Eglinton West Subway and the Eglinton Transit City line. It now seems unlikely that LRT will ever reach YYZ. This is a shame since, due to their low construction and operation costs, LRT fares tend to be the lowest of all. They are not as fast as commuter trains or metros by any means, but they still provide better connections than a lurching bus stuck in traffic. To those simply trying to get to the airport inexpensively, their service has appeal compared to UPX at least in terms of access and price.

No matter how the data is sliced, the Union-Pearson Express seems unfairly expensive for a North American airport rail link. It is overpriced relative to other airport trains. It is prohibitively expensive compared to simple public transit such as subways and LRT, while providing none of their network utility. It gouges the very tourists it is supposed to be getting off the roads. There is no rhyme or reason to why it should cost so much more than rail connections in other cities other than a desire to treat is as a revenue source and not as sorely-needed transportation infrastructure.

And so, the North American title of "most expensive airport rail link" rests tightly around Toronto's neck.