What's the deal with those strange subway symbols?

So what's the meaning behind these cryptic markings?

"Essentially, the markers are for train operators and the guards, for safety reasons," says TTC spokesman Brad Ross. "The red marker at the far end of the platform is the marker where the [train driver] is to 'spot' the train ... the operator should be stopped and the cab should be lined up with that marker."

Ross says aligning the train with the red marker guarantees that all cars are safely inside the station. Without such a system, changing platform layouts and visual cues would make it hard for drivers to discern where to stop. 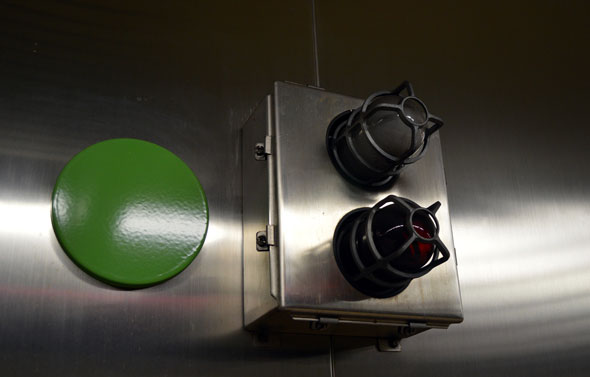 Further down the platform from the front of the train, a green circle tells the guard, the TTC worker who controls the doors, that it's safe to release passengers on the platform.

"We have what's called a 'point and acknowledge' program where the subway guard is to stand up, open the window, physically point at that green marker, and then open the doors," Ross says. "That is to prevent doors opening off-platform or doors opening in error inside the tunnel."

On Line 1 (Yonge-University-Spadina,) a pair of green triangles provide the same service to the crews of the new Toronto Rocket trains. The driver and guard areas are located in different places on the train, so the TTC had to install separate markers.

(On the Sheppard line, which uses shorter trains, an orange triangle indicates that the guard is in the trailing car.)

The last of the four symbols, an orange circle, is supposed to be the last thing a train operator sees upon departing a station. Ross says the guard is required to look back along the platform as the train is pulling away to ensure no-one is caught in the doors.

"There's a failsafe in the system where if the doors are ajar, the train can't move," Ross says. "It's a safety precaution that the guard is to watch the platform and make sure nobody is stuck in the doors or comes into contact with the train as it's departing the station."