It's not always possible to rest in peace in Toronto, at least not forever. Over the last century, as the city has expanded beyond its old borders and the suburbs have taken over formerly rural tracts of Etobicoke and Scarborough, several burial places have become perched in unusual places: in the middle of a complex highway cloverleaf, in a mall parking lot, off a nondescript residential street near Lawrence and Bellamy.

Whereas lost cemeteries like Potter's Field--located just west of Yonge and Bloor on the edge of the old village of Yorkville--have been dug up and erased, these hidden Toronto cemeteries are still hiding out and hanging on, often unnoticed. We've written about St. Michael's cemetery at Yonge and St. Clair on previous occasions, but there's quite of few more of these intriguing spaces worth knowing about. 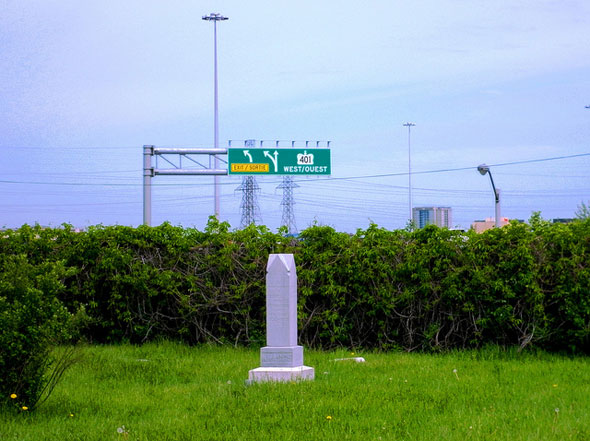 Richview Memorial Cemetery
Farmer William Knaggs, the founder of Richview Memorial Cemetery, couldn't have known the tranquil rural land he donated for use as a burial ground would be spoiled by not one, but two highways. The little cemetery, located less than a kilometre from a busy runway at Pearson, is enclosed on all sides by the Highway 427, Highway 401 and Eglinton Ave. interchange, with only a small road for access. A church that accompanied the graveyard was demolished in 1959, writes Jamie Bradburn at The Grid. About 300 people are buried there.

Holy Blossom Cemetery
Located just south of Gerrard on Pape behind a high wall and a locked gate lies Holy Blossom Cemetery, Toronto's first Jewish burial ground. The small lot, purchased on the outskirts of the city in 1849 almost a decade before the opening of the first Toronto synagogue, accepted its first interment in 1850 and was active until around the 1940s. The city later grew to encompass the cemetery, hence its location away from the traditional centres of Jewish culture. 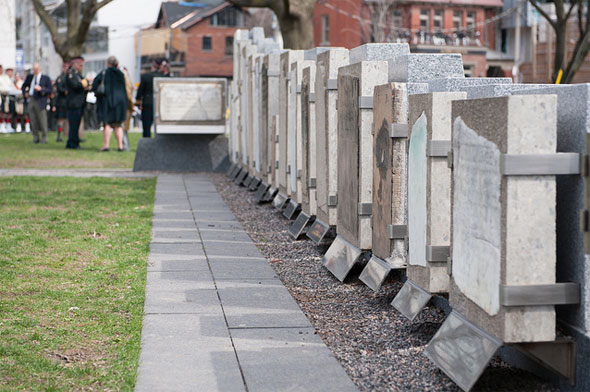 In the almost 70 years that followed, 400 more people were laid to rest at Wellington and Portland. The graveyard was later absorbed into the larger Victoria Square, but years of neglect and indifference (the park was used as a cow pasture) led to many of the original tombstones being lost. Numerous unmarked graves lie beneath the fresh cut grass. 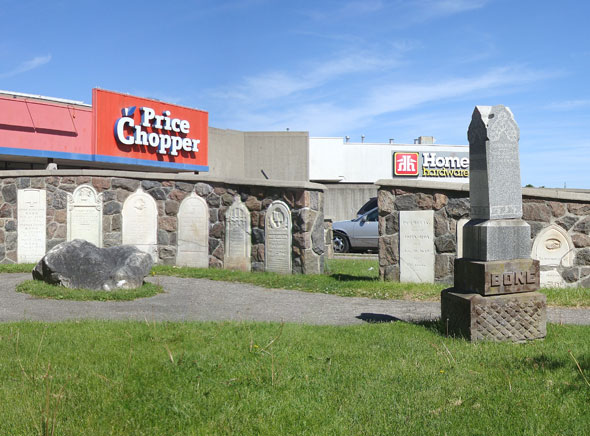 Christie's Methodist Cemetery
Located outside the entrance to a Price Chopper supermarket in the middle of a suburban parking lot, Christie's Methodist Cemetery rivals Richview Memorial Cemetery (above) as one of the least desirable final resting places in the city. Like Richview, the city in the form of Bridlewood Mall absorbed the small cluster of graves in 1973. The stone markers, which date from the late 1800s, were preserved in their unusual location thanks to a concerted effort by the former borough of Scarborough.

Taber Hill
Long before European settlement of what is now southern Ontario, the local Iroquois First Nations people were placing the remains of their dead in a burial mound in what would become Scarborough. The 427 interments at Taber Hill were unearthed by chance in 1956 when the hill, which was assumed to be natural, was being cleared. On further investigation it was found that the remains had been gathered in the mound following interment elsewhere, a practice known as the Feast of the Dead. The area is now a designated cemetery.