What's it like to ride crowdfunded transit in Toronto?

In January, now-mayoral candidate Doug Ford proposed to axe the 504 streetcar on King Street, and any Liberty Village commuter who takes the 504 would have just cause to vote for him on that basis alone. Well, that is, if he could come up with something better in its place.

Residents of the former industrial neighbourhood are afforded few transit options, and the worst of them is the 504 King streetcar, the busiest surface route in the city. Carrying an average of 60,000 people a day, it's often over-crowded and delayed.

Scollon and Chang, neither of whom live in Liberty Village, wanted to provide an alternative for transit-starved residents in the area after hearing complaints.

Scollon relays a story about a man who plans to leave the neighbourhood in favour of Port Credit, believing his commute to Union via GO train will be shorter than the options afforded to him now.

On a chilly Thursday morning, I hop on the 7:45 a.m. shuttle to see if Line Six is a viable transit alternative.

At 7:35 a.m., the vehicle from King Charter services arrives, which Scollon and Chang assure is fully licensed and insured. There's even free WiFi.

The bus, however, is not completely accessible. The steps onto the bus may be too steep for seniors and the disabled, and the aisles do not leave much room for riders with strollers or mobility aids.

Scollon says that will change.

"We want to add accessible buses as we expand," he says. "We will take into consideration people with travel needs, such as people with strollers, the elderly, and wheelchairs."

The lights are dimmed, and the large tinted windows create a comfortably dark ambience. Aside from the barely audible mumble of the radio, the ride is fairly quiet.

Going west on Liberty Street, the bus turns down Atlantic Avenue and then east onto King Street. It then turns onto Niagara Street, driving until it meets Bathurst. Then quickly turns right, then left onto Front Street.

Chang says the route would usually go up Strachan, but due to construction the bus detours through Liberty instead, adding up to five minutes to the commute.

On a particularly rough stretch of road on Front, the ride gets noticeably bumpy and is held up for a few minutes behind traffic at Spadina Avenue, the trip's only minor inconvenience. 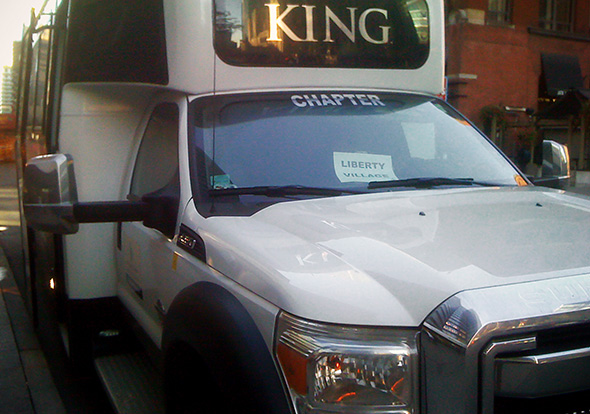 When asked if drivers have the ability to change course, Chang says they do not. The routes are pre-planned, he explains, and are based on his and Scollon's many trial runs to find the optimal path to Union Station.

In the future, Chang says the drivers can take their own routes if they encounter problems.

At 8:06 a.m., the bus arrives at Front and University Avenue, exactly 20 minutes after departure.

The journey as a whole was relatively quick and painless, a sentiment echoed by my fellow passengers.

He adds interest for Line Six is growing, and has heard from people who bike and walk to work looking for a reliable way to get to commute in the winter.

And the future is where both Scollon and Chang are focused. Where the TTC fits into this picture is yet to be determined, as they've decided to take a wait and see approach with Line 6. It's possible the Commission could mount a challenge to Line 6 based on its legal monopoly in Toronto.

For now, Line 6 plans to add evening buses to the Liberty line, and even more routes, including ones servicing the Junction, Beaches, Yonge and Eglinton, and Humber Bay.

Scollon and Chang have also tested using GPS to help pinpoint the bus' exact location, and want to introduce demand-based "living" routes instead of static routes.

Using an algorithm, living routes would sift through data pooled from people interested in taking Line Six and generates an optimal stop location that provides the shortest walking distance for all parties involved.

All of this for a better way to work.

"I would say the pilot has been a success," Chang says. "We want to grow Line Six to help battle the transit challenges the city faces."

Photos courtesy of Line 6 Transit and the author.