The birth of Late Night TV in Toronto

For a city chock-full of night owls, it's weird that Toronto didn't get 24-hour television until the fall of 1980. Back then, local broadcasters would tell viewers to go to sleep after the news by way of patriotic-but-slightly-ominous sign-offs, and run colour bars throughout the night until the early morning. No Jillian Michaels Body Revolution, Aero Knife or Flex Seal infomercials to keep insomniacs company, just the eerie drone of 400hz.

In September of 1980, CFMT Channel 47 Cable 4 (then known as MTV - Multicultural Television, now OMNI) fried a million local synapses with the advent of The All-Night Show, a no-budget late night filler which kept the broadcast (and party) going all night. Hosted by amiable Chuck the Security Guard (portrayed with great chutzpah by Chas Lawther - catch phrase "Hey You!") and his unseen co-host Ryerson, The All-Night Show screened movies and reruns of offbeat TV series such as The Outer Limits, The Prisoner and The Twilight Zone from 2:00AM until dawn, with bizarre skits and live phone calls between programs.

It kinda took Toronto counterculture by storm: precipitating the irreverent pop culture riffing VJs which MuchMusic was about to usher in, Chuck and his gang of merry misfits also breathed life into aged, back catalogue junk by turning it into comedy gold. Future revered series such as Mystery Science Theater 3000 did not get there first.

Although the anarchical premise was that these hosts were illicitly broadcasting material on the CFMT wavelength after hours, the reality was not much different. After bumping heads with CFMT's befuddled management too many times, the format was scrapped in 1981. In addition to giving a local comedian named Jim Carrey some voice work for his fledgling demo reel, The All-Night Show proved there was indeed an appetite for all night televisual hijinx.

Across Lake Ontario, our neighbours to the South were enjoying The All-Night Show so much that local Buffalo NBC affiliate WGRZ created their own version, entitled The Cat's Pajamas. Hosted by the chain smoking, ever smiling Weatherman Barry Lillis, it lacked the rum punch of The All-Night Show but cast a wider and more eclectic net (encompassing everything from Hammer Horror to Hee Haw by way of the Bowery Boys). And of course, Buffalo being Buffalo, there was lots of unintentional comedy on display for even the most discerning nighthawk.

Back in Toronto, it took until February of 1985 for Citytv to get in on the 24 hour act. Their Friday night favourite City Limits - all-night music videos and bizarre interstitials, itself a spin on The All-Night Show - had proven popular enough for "Toronto Television" Citytv to commit to a full 24 hour schedule, including generous late night helpings of their specialty, Movies. 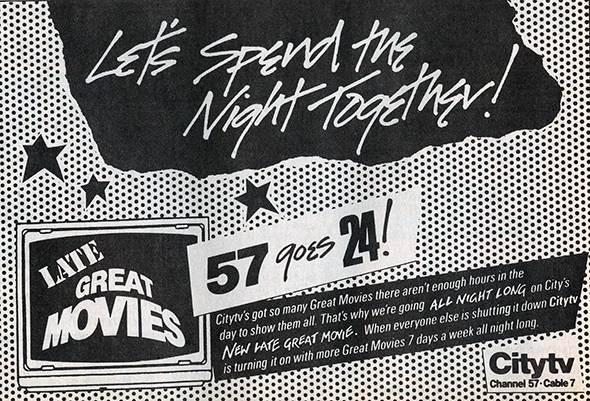 Using the populist, dulcet tones of Mark Dailey, City proudly announced it was open for business all night long, with the newly branded "Late Great Movies" broadcasting all manner of trash and treasure for those red eyes awake in the wee hours.

After an embarrassing on-air incident involving cats, and a bird being flipped at Citytv's head honcho Moses Znaimer, Segarini was exiled to Siberia and Late Great Movies was given the best host of all - the city of Toronto itself.

Quickly becoming as much a hallmark of the station as "EVERYWHERE!", "You're Watching Late Great Movies" was the brain child of John Gunn, creative director of Citytv at the time. He had wanted to capture the visceral, dangerous excitement of late night Toronto on the

Yonge Street strip, where so many wonderful grindhouse theatres like the Rio, the Biltmore, and the Downtown had screened the exact kind of B-movie mayhem that was being shown on Late Great Movies. 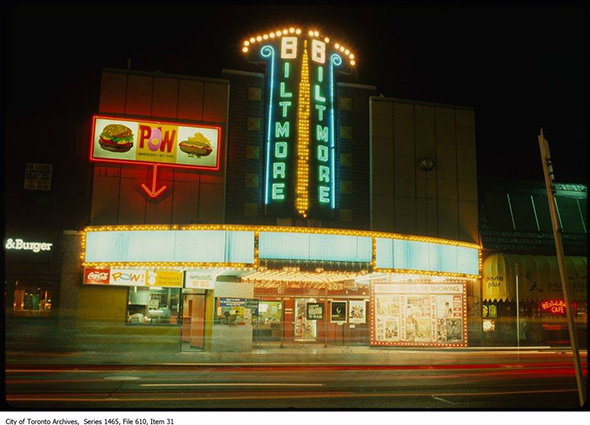 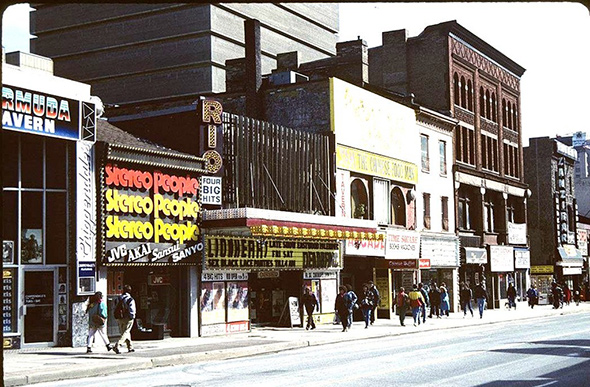 As well as dopey kids with big hair standing in front of Sam the Record Man, the most crucial part of Citytv's late night experience was often the darkly comical observations from The Voice, a.k.a Mark Dailey. As the Late Great Movies grew in popularity and awareness, so did Dailey's reputation as the city's Godfather of vox.

Across the dial at Global TV, 1986 saw the creation of 3 memorable late night filler shows which ran on a loop all-night, every night - Night Ride, Night Walk and Night Moves. Using an ethereal jazzy soundtrack paired with a roving camera, these lullaby interstitials remain essential Polaroids of Toronto: 1986. Even though there were only three episodes ever made, the series left such an indelible mark people seem to have collectively mis-remembered them as being new editions every night.

By the 1990s, late night had become an infomercial Hell, and broadcasting for 24 hours was as expected as showing up for work with trousers on. With Netflix and its ilk, torrents and YouTube, the time of day you indulge in visuals is now totally irrelevant; content is spilling out of every orifice, and you are the ultimate programmer. 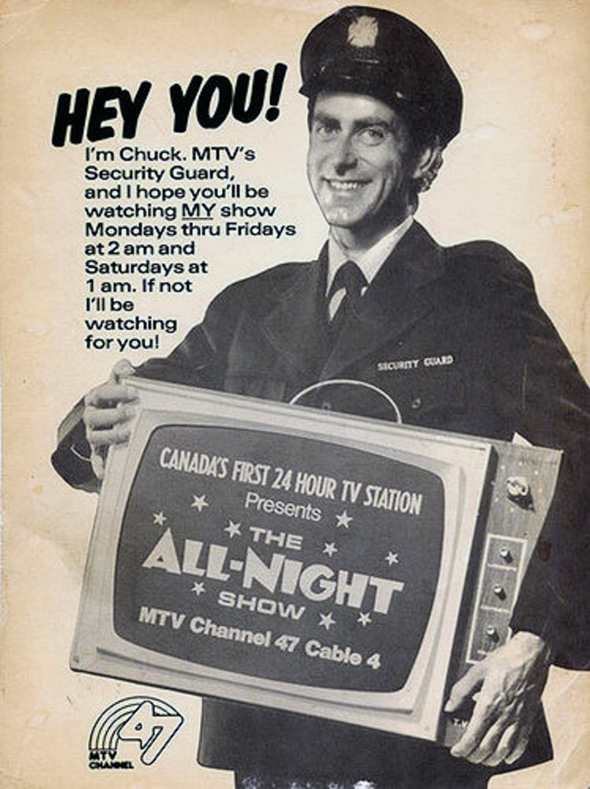 In the 1980s, Toronto was lucky to have had bona fide classics like The All-Night Show, Late Great Movies and Night Ride to keep that midnight oil burning while the rest of the city slept.