5 historic Toronto buildings that could use a makeover

Broadly speaking, these are good times for heritage buildings in Toronto. Developers are increasingly aware of the value of historic structures and the various levels of government are becoming better at ensuring links to the city's past are kept safe from destruction or manhandling (there are still grievous loses, however.)

Problems often surface if businesses that own historic buildings fall on hard times. When the cash flow dries up, so too does the ability to properly maintain the building. Repairs get postponed, cracks go unfixed, and paint starts to peel. If the property is outside of an area popular with developers, the neglect can snowball, like it did at Walnut Hall. Jilly's at Queen and Broadview was reportedly close to collapsing into the street last year.

Here are 5 historic Toronto buildings--some with heritage protection, some without--in need of love.

Waverly Hotel
The fate of the one of the city's oldest hotels is looking bleak. A proposal to knock down the timeworn timber and brick building at College and Spadina for a high-rise student residence is currently working its way through the approval process, and the city isn't keen to protect the building from possible demolition. Perhaps it will never see a loving restoration like other, grander Toronto hotels, but surely there's a future for the Waverly Hotel on Spadina Ave. 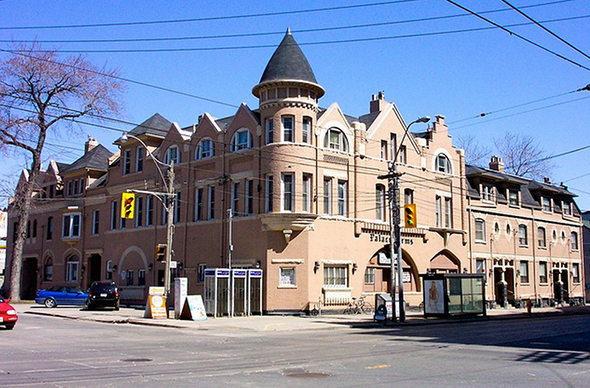 Palace Arms Hotel
Like the Warverly (though, at least from the outside, in better condition,) the Palace Arms Hotel at King and Strachan is another single-room occupancy hotel inside a historic building. Though this type of flexible budget accommodation serves an important purpose, but the tight financial margins aren't conducive to careful preservation (take Jilly's, for example, which was rescued from collapse last year after years of neglect.) 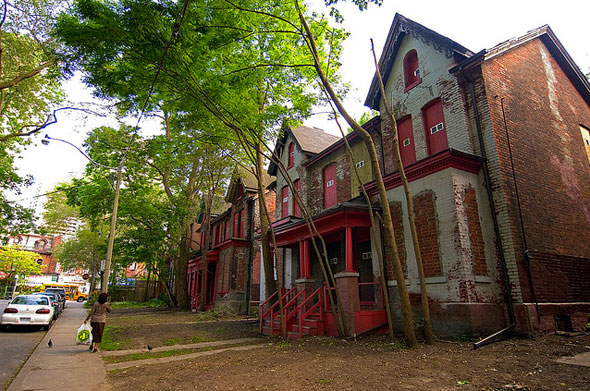 The Howard Street/Glen Road houses
Things have started to look up recently for the derelict homes of Glen Road. The buildings that were once slated for demolition during a planned expansion of St. James Town are now the focus of a slow-moving development proposal that could see the ruined mansions restored as part of a residential tower complex. Right now, however, the windows are boarded up and the brick and wood exteriors are beginning to crumble. After dark, the west side of Glen Road is enough to make anyone quicken their pace. 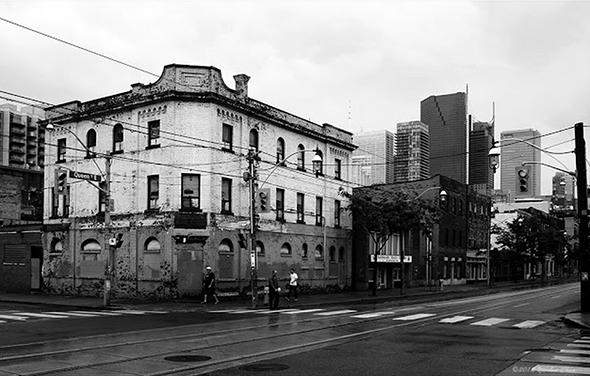 134 Sherbourne Street
If things had worked out better for the battered, century-old former hotel at Queen and Sherbourne, we might be calling it Kormann House. Instead, the corner building opposite Moss Park sits abandoned, its windows partially bricked up and the patchy white and grey paint peeling off the exterior. The developers behind Kormann House proposed to renovate the heritage building as part of a mid-rise condo complex, but the project, backed by Brad Lamb, fizzled out (according to The Grid, the renovation would have been prohibitively expensive.) Today, the shuttered sales centre remains the only part of the condo ever built. 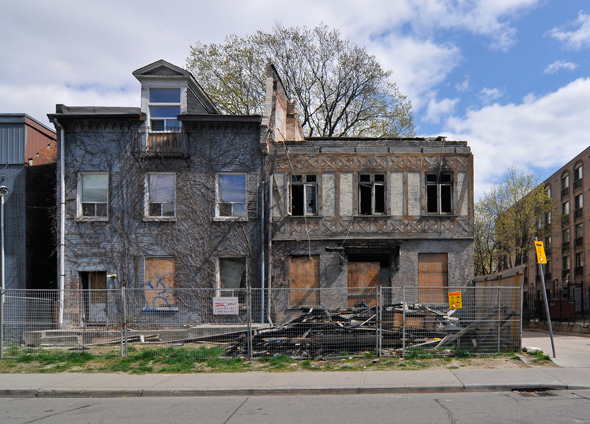 297, 303, 309 and 311 George Street
Like their Sherbourne Street neighbour, the historic houses on George Street, the oldest of which was built before the Toronto Islands became islands, are a mess. Although the city has expressed its intention to designate the properties as heritage buildings, the move will do little to improve the conditions the current residents. One building, number 295, lost its roof in a fire and made headlines in 2006 when a hundred decomposing sheep carcasses were found inside. Without a miracle intervention, the historic homes of George Street look doomed to stay wrecked. 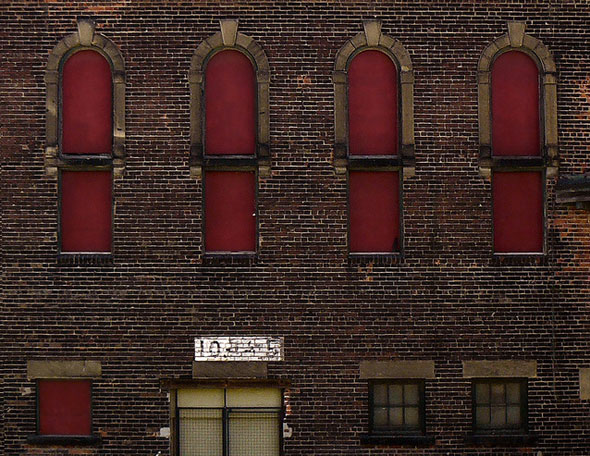 Bonus: Toronto Central Prison Chapel
One of only two remaining pieces of Toronto's brutal central prison, its former chapel, is one of the few buildings in Liberty Village to elude developers. A proposal by the owners of Miller Tavern to turn the brick building into an upscale restaurant surfaced in 2012, but appears to have since hit the skids. The heritage protected building last saw use as part of the Inglis manufacturing complex before becoming surplus to the company's requirements. Right now, it's empty.