Where in the world is Rob Ford? We asked before, and it souns like we will find out today. The Ford family says it is going to release proof that the mayor is enrolled in a rehabilitation program somewhere outside Toronto, possibly in Muskoka, in an attempt to quell rumours the mayor may be elsewhere.

Doug Ford told the Toronto Sun's Joe Warmington the family will "put an end to all speculation" about where and how Rob is being treated for alcohol and (maybe, one would hope) drug addiction issues.

The news comes as yet another video showing a visibly inebriated Ford was released by the Toronto Sun. In the 42-second film, which appears to be shot during daylight hours in a bar (though a bartender announces last call,) Ford tells his companions that he's been regularly staying in a hotel.

Since Ford appeared to split Toronto for rehab following release of an audio recording and new images showing him holding a pipe there has been wild speculation about where he may have ended up. Ford "declined" to enter the United States on Thursday, though it appears he may have been refused entry and allowed to return to Canada without a red flag against his name.

During this week's city council meeting, Councillor Denzil Minnan-Wong said he spoke to Ford on his cellphone. "He said that he was in rehab, he was working out, he asked how things were going in council, and I told him there were some councillors who were trying to undermine the contracting of the garbage and he wanted to come back," Minnan-Wong said. "He sounded like he was in good spirits and that he was getting better."

Minnan-Wong said he didn't have authority to disclose Ford's location.

Rumours swirled Wednesday about a possible Rob Ford sighting at a Junction-area Tim Hortons. Staff at the coffee shop reviewed the security tape and concluded it was Doug, not Rob, who had dropped by. "It is, for sure, Doug," Michelle Robichaud, director of PR for the chain, told the Star.

Cayla Clarkson, the person who made the sighting, said she saw Rob Ford - and she is adamant it was Rob - change from a suit into grey sweats in the bathroom. 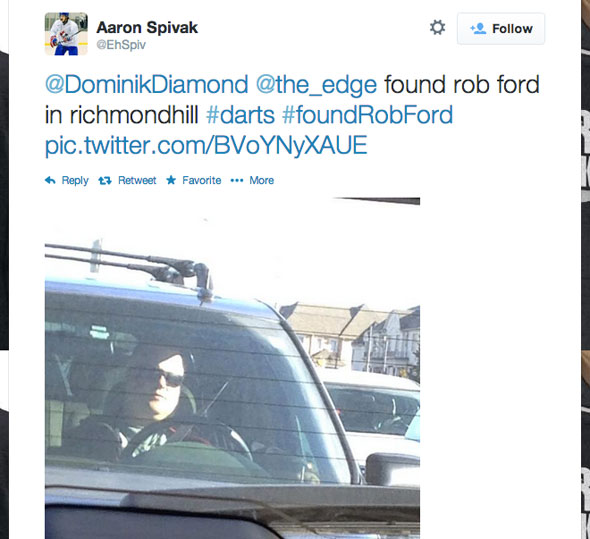 Also on Twitter, a possible sighting of Ford behind the wheel of a vehicle in Richmond Hill, although it's worth noting the mayor's black Cadillac Escalade isn't fitted with a roof rack, at least judging by recent photos. A blue (and aptly named) Ford Escape, which has been photographed several times in Rob Ford's driveway and possibly belongs to his wife, has roof accessories similar to the ones seen in the photo.

Should the mayor's family disclose details about Rob Ford's treatment? Does his position as mayor remove some right to privacy? Is it necessary to prove Ford's location?