A blue, white and red "for lease" sign is perched in the upper left-hand corner of Pentimento Gallery's front window. John Rait is closing the doors of his Leslieville gallery this summer for good, and he says it's because of road closures associated with the construction of the TTC's Leslie Barns. The closures have already slowed down business in the neighbourhood, he says, and with construction going on throughout much of the summer, Pentimento can't sustain itself.

The barns are being built to help house the TTC's fleet of new, low-floored streetcars, a function Rait agrees is necessary. But he says he's concerned that when the work is done, Leslieville as we know it won't exist -- it'll be a ghost town.

"This is impacting me in prime season. I had two shows scheduled this summer that would carry me through the year," he says.

"The whole city is benefitting from [the installation of the Barns], but my neighbourhood is being decimated through it. There's nothing to assist small businesses through this kind of interruption."

He says if the city had better anticipated the magnitude of the economic slowdown in the area, he may not have had to close. "The city should give tax breaks to the property owners. And if [the construction period is] extended, the rent should be paid for small businesses that need to survive."

The construction is already underway, with Leslie St. at Queen closed for watermain repairs. This portion of the constuction is expected to carry through until June 21, and after that, streetcar tracks along Queen St. E. need to be installed, which is expected to take until the end of July. 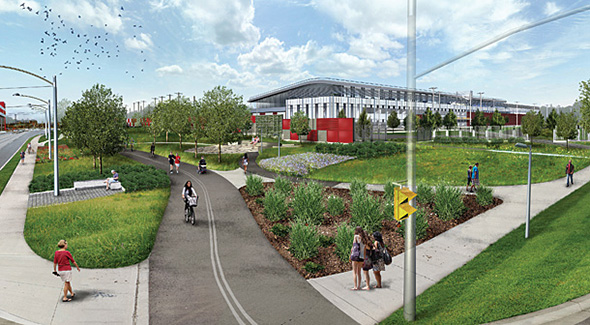 It's all happening in Ward 30 Toronto, Danforth, councillor Paula Fletcher's territory. Fletcher says the last thing she wants to see in her ward is a construction-induced mini recession, and that she will do what she can to fix it.

"Surrounding businesses shouldn't have to pay for a city-wide project," she says, or be fearful they won't meet rent or be able to pay property taxes. "It shouldn't be all pain and no gain."

Fletcher brought forward a member motion at council last week requesting city manager Joe Pennachetti to report back to the executive committee on "the feasibility of implementing a property tax relief program for businesses impacted by large infrastructure projects of municipal significance, including the current connecting track work on Leslie Street."

While that's a solution Rait thinks could help, he says it comes way too late to be of any use. "The bill to help small businesses could have been [introduced] five years ago [when planning began]," he says.

From what I can see, Rait is right about business being affected. Construction under way so far has made the usually bustling little east end neighbourhood, full of families and professionals, seem sleepy. There's much less foot traffic than I'm used to seeing when I visit Rait on a Tuesday, midday. The energy in the area has dipped, and other business owners have noticed it, too.

Max Ryan works across the street at Sandy Aleksander,a specialty food shop specializing in charcuterie, cheese and chocolate. Ryan acknowledges business has been slower than normal. But Ryan has a kind of "whaddya gonna do?" attitude, and says that he believes Leslieville's small businesses are wonderful enough that they will survive the summer lull that's been foisted upon them. 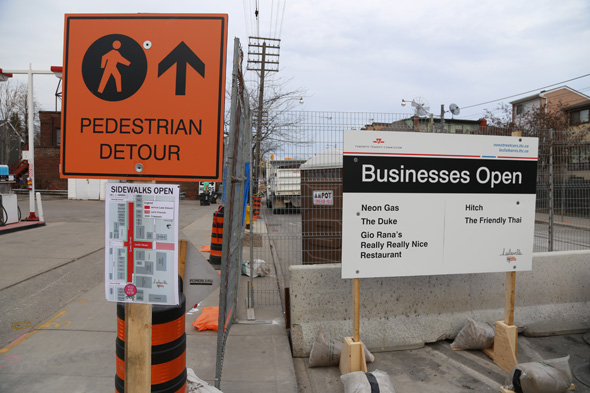 "I think [the city and the TTC] will do their best to get it done as quick as possible," Ryan says. He mentions that despite the decidedly negative impact to businesses in the area. the BIA is doing its part by launching a shop local campaign for the neighbourhood. And members of the community have banded together to create a thing called cash mobs, in which everyone bands together and makes sure to shop at a couple of featured small businesses in the area.

That, combined with community commitment to getting the word out online, is giving him hope.

What do you think? Should the city have put cost-alleviating initiatives in place sooner? Is the impact of construction being overstated?