The story of T. H. Johnson and the great fire of Toronto

The night of April 19, 1904 was unseasonably cold. The temperature lingered around three degrees Celsius and persistent snow squalls dragged on a stout breeze out of the northwest had men and women across the city turning up the thick collars of their coats.

The news of the day dealt with the possible construction of a Methodist hospital at the bequest of the recently deceased Hart A. Massey, the namesake of Massey Hall, and salary cuts at the Board of Education. Prof. Bradley, a doctor accused of treating his patients with various "queer" methods, including pouring honey in the eyes of a Junction woman, was in court charged with breaching the medical act.

As darkness fell, the wind persisted, blowing along the quiet streets of the city's garment and wholesale district. With the long work day complete, the south end of Bay Street between Wellington Street and the Esplanade was quiet. Night watchman T. H. Johnson was beginning his rounds at King and Bay. 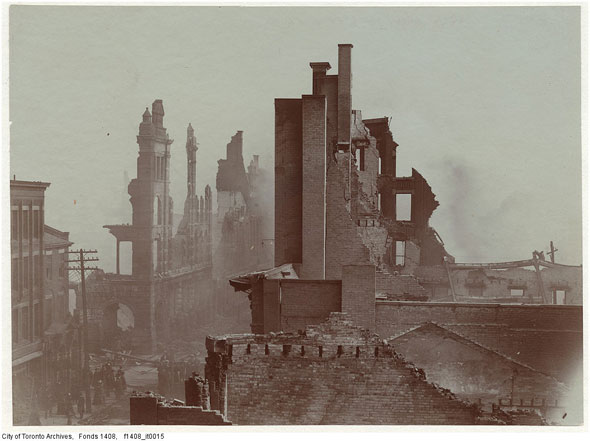 At around 8:00 p.m., Johnson spoke with a police officer and another watchman. The two private security guards were, at the request of several factory owners, responsible for patrolling a set route, keeping an eye out for crime and other nefarious dealings. The mood was convivial but none of the men were pleased about the sudden cold snap.

Johnson left the group and walked south on Bay to Wellington just as the clock tower of Old City Hall chimed the hour. He turned right, headed towards the E. & S. Currie Building on the north side of the street. The company produced men's neckties and was packed high with dry bolts of cotton. At the entrance to a small service track, the smell of smoke on the breeze stopped the watchman in his tracks.

The shimmering orange light from a small fire a few metres down the lane lured Johnson to where the road forked round the back of Gillespie, Ainsley and Co., a furrier, and continued a short distance north to a shirt and collar factory.

"There I saw a column of fire," he recalled. "It looked as if it had been going for several minutes. Turning without trying to get in, I started to run for the fire alarm box ... before I got out of the lane I fell, losing a few seconds." 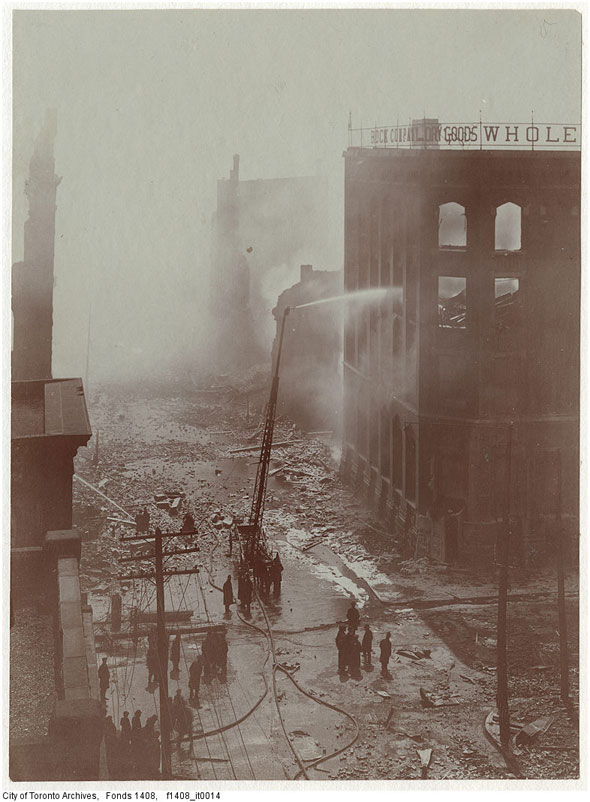 Few buildings in the dense factory district had any kind of fire protection. The four-storey Currie necktie building was a tinder box packed with flammable materials. Inside the structural frame of lumber, the interior had open stairwells, wooden floors, and no fire breaks. Sprinklers were still a novelty and just a few factories in the vicinity had a functioning system.

Johnson arrived at alarm box 12 at the corner of King and Bay at exactly 8:04 p.m.. He stuffed his fingers through a small pane of glass on the front of the little wooden device, grabbed the metal hook inside, and pulled sharply downward. Moments later, police constable Armstrong, seeing the flames from a distance, sounded another alarm box at York and Front Streets.

Fire chief John Thompson was at the Central Fire Station on Lombard Street, just south of Richmond and Jarvis, when the bells rang. He, along with three engines and a pumper, found the Currie Building entirely engulfed by flames. The fire was already spilling over the roof of the building onto neighbouring factories, whipped into a crackling frenzy by 50 to 65 km/h winds.

T. H. Johnson looked on helplessly as the fire crew attempted to beat back the blaze. "By the time the fire reels reached the spot the flames had started to lap the side of Ansley's, the furriers to the east of Currie's, and aided by the gale that was blowing, the flames soon got headway on that building," he reported. 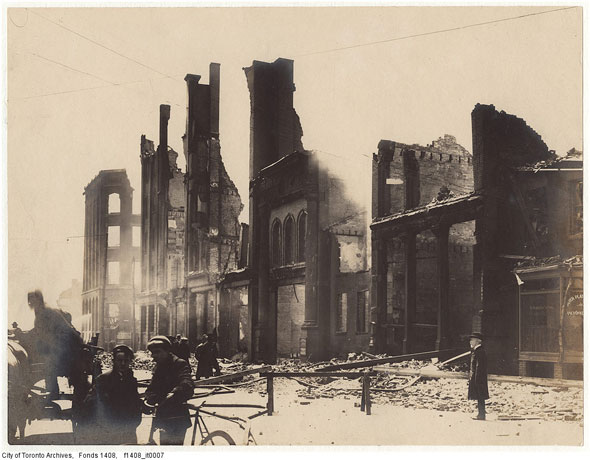 By 9:00 p.m., less an hour since the alarm was raised, every fire crew in the city was on the scene of the rapidly escalating inferno. The watchman was sure the Currie building was empty but he couldn't be sure about the properties in the path of the fire, including the offices of the Evening Telegram, the Queen's Hotel, and the Customs House. "I feel sure there was no-one around," he said the next day. "Every door was padlocked as well as locked."

Hearing of the unfolding disaster, mayor Thomas Urquhart telegrammed the deputy fire chief asking if he needed any additional help. The response was clear: "We need all the assistance we can get."

Horse-drawn fire reels from the surrounding cities, some as far as Buffalo, were summoned but by 11:00 p.m. buildings on Front Street were beginning to collapse. As fire gutted the factories' wooden structural supports, the brick exterior walls flopped on to the street, pulling down telephone and electricity wires in great thundering crashes. 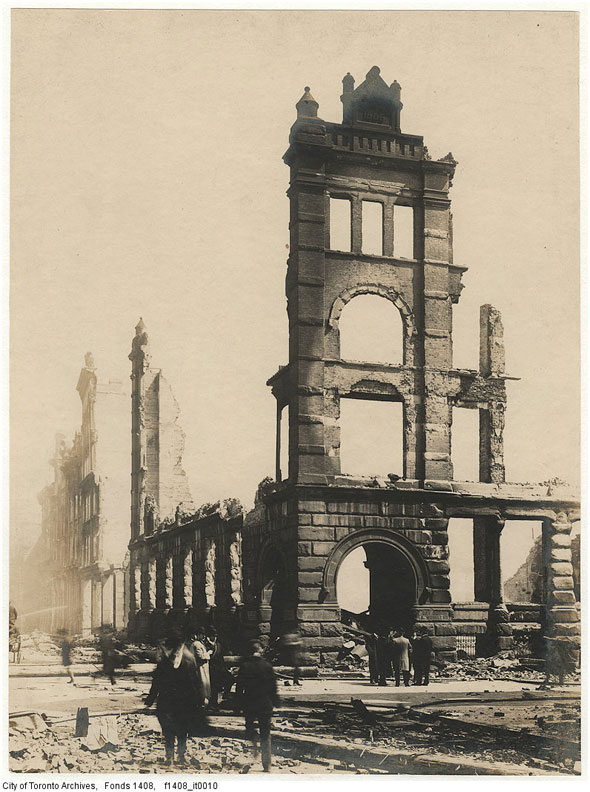 By daybreak, the Great Fire was largely extinguished, save for the odd smouldering pile of rubble. The scene was one of total devastation. The torched shells of some 100 buildings in a 20-acre swath, roughly between Bay and Wellington and the rail tracks at Bay and the Esplande, looked like a mouth of full of smashed teeth.

Amazingly, no-one was killed, though a few firefighters received minor burns and broken bones. It was never determined how the fire started, though the watchman thought it was likely a short-circuit. "In my opinion it was electric wires that were responsible. There was a heating apparatus, but I do not think that this could have anything to do with it," he said.

Looking over the scored ruins in the smoky half-light of the morning, Johnson lamented the destruction to a Toronto Star reporter.

"All my buildings that I have been watching so long are gone." 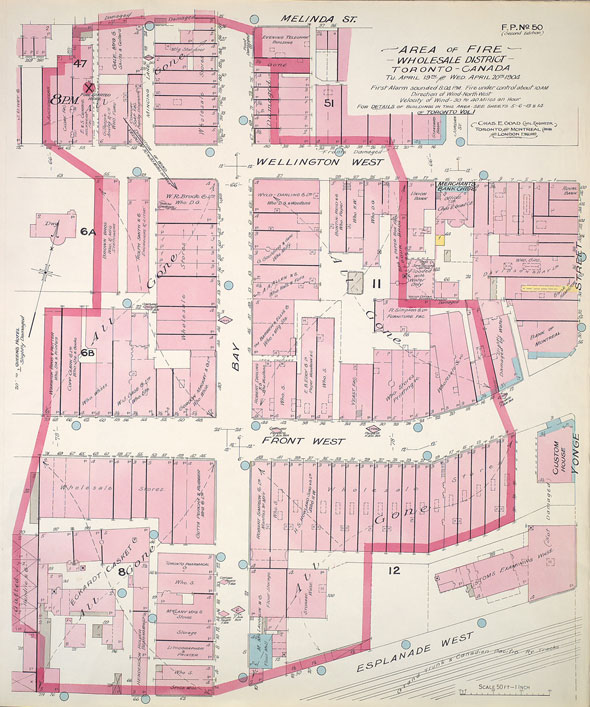 Currie's necktie factory, where the fire started, was located were the south tower of TD Centre stands today. If there was a marker to commemorate where the flames were first seen, it would be inside the black building. Alarm box 12 still exists and is today looked after by Toronto Fire. "Box 12" is the name of fire service's mobile lunch vehicle.