5 blueprints and maps of unbuilt projects in Toronto

The version of Toronto we see around us, the streets, parks, transit system, and its neighbourhoods at large, are all just a version of the city that could have been. Unlike cities in other parts of the world that evolved semi-organically over centuries, Toronto is the result of years of planning and controlled expansion. A road here, a public space there, (usually) for a reason.

But not all the plans made for Toronto reached fruition. The archives are chock full of plans, maps, diagrams, and blueprints that, in an alternate reality, could have been built. Here are six plans for Toronto that for better or worse didn't quite work out as intended.

THE DISCARDED 1788 PLAN FOR TORONTO

A year after the Toronto Purchase, the deal that traded 2,000 gun flints, 24 brass kettles, 10 dozen mirrors, 2 dozen laced hats, a bale of flowered flannel, and 96 gallons of rum with the Mississauga First Nation for 101,528 hectares of land, a large portion of which is now occupied by the City of Toronto, Captain Gother Mann of the Royal Engineers prepared his plan for a new city on the "Torento Harbour" (pictured above.)

Rigidly symmetrical except for an unusual additional block tacked onto the southeast corner, the plan showed a complete disregard for any features of the natural landscape, including the waterfront and various creeks and rivers. There central core, surrounded by a public common, would have fit between King, Harbord, Bathurst, and Bay, according to Mark Osbaldeston in Unbuilt Toronto.

Mann's ideas were ditched in favour of the smaller, simpler plan by Alexander Aitken that formed the nucleus of this Toronto. 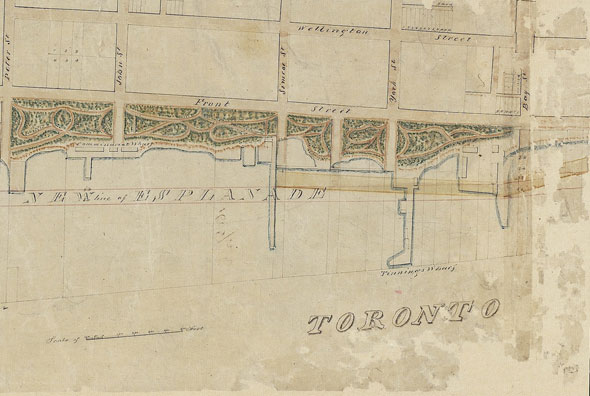 Sadly, the story of the Toronto waterfront is one where the might of industrial development won out over plans to protect the shoreline for public use. The Walks and Gardens (to use just one of its various names,) which still rears its head in land deals today, sought to turn all the land south of Front to the water for a linear park connecting the Garrison Reserve with the Don River park.

The idea was first acted on in earnest in the mid 1800s, though it had been around since the very first days of the city.

The park got remarkably far - at one point the city owned the land it needed - and was partially built in the form of Fair Green between Berkeley and Princess in 1841. Instead of a waterfront park, the city got a bustling port and the Union Station rail corridor. On the plus side, the conditions of the sale of the park land required the city to invest in new green spaces like Riverdale Park and High Park. 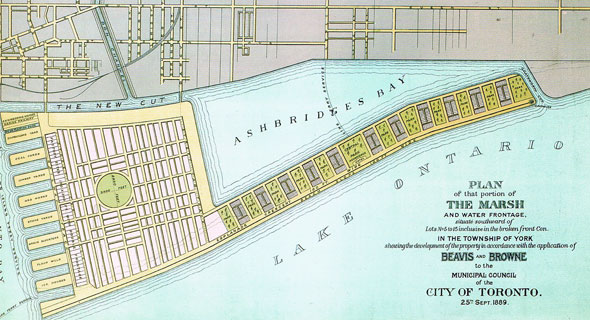 There can be no part of Toronto that has been so thoroughly manhandled as Ashbridge's Bay and the lower Don River. In its natural state, the natural mouth of the Don was a reedy marsh with scattered deep ponds and creeks. A sandbar connected the Toronto Island to the foot of Woodbine.

Around 1900, the city, faced with a lack of shipping berths for large vessels in the Toronto Bay, believed reclaiming the heavily polluted Ashbridge's Bay would deliver an economic lift. The area had become a soiled and noxious quagmire after years of uncontrolled industry on the waterfront, which included the vast stockyards of William Davies Company, the company that helped give Toronto the nickname Hogtown.

In January 1911, a public referendum created the Toronto Harbour Commission and several plans were produced for the 5.2 square kilometre site. The version above, created by engineering firm Beavis and Browne several decades before the Port Lands were created, called for public parks, a hotel, and lighthouse to the east of factories, grain elevators, flour mills, and ice houses.

The plan that was adopted by the city in 1912 called for the marsh dredged to a depth of 7.3 metres and a massive ship channel and turning basin. The blueprint also included a winding boulevard that would have linked the foot of Bathurst with Woodbine via the Toronto Island but the road was abandoned along with the parkland component when the federal government failed to commit funds for the necessary bridges during the first world war. 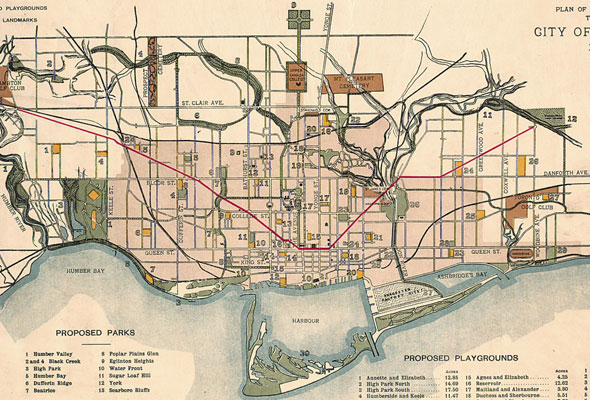 Imagine Toronto with diagonal avenues radiating from Queen Sand University to the Humber River and Queen and Church to Taylor Creek Park near Woodbine and O'Connor. Scattered in between are parks with tantalizing names like Sugar Loaf Hill and Dufferin Ridge.

This was the 1908 plan of the Guild of Civic Art, a group of artists and architects formed with the goal of beautifying the city with European-style radial roads and public spaces. The map above illustrates the raft ideas the group pitched (somewhat successfully) to the city that year. The red lines show new diagonal thoroughfares. The light green patches are proposed parks and playgrounds (the image above was cropped to allow more detail at this small size.)

Some of the guild's basic ideas came to pass in slightly altered forms: Dundas was extended east from Ossington and Bay was punched north from Queen up beyond Bloor on the advice of Toronto's Civic Improvement Committee. Several of the guild's suggested parks were adopted, too. 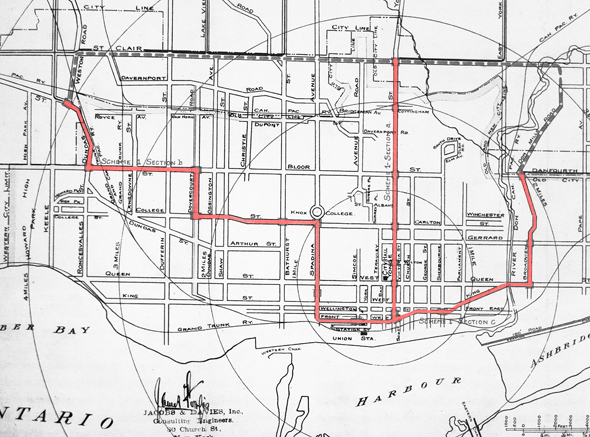 Sixty years before Lieutenant-Governor Ray Lawson sunk the ceremonial first soldier beam into Yonge in advance of the coming subway, a plan prepared by New York engineering firm Jacobs and Davies called for a winding east-west subway from Broadview and Danforth via Front, Spadina, College, Dovercourt, Bloor, and Dundas West.

It was pie in the sky, really. A 1915 report by the city's famed commissioner of works R.C. Harris, the driving force behind civic improvements like the Prince Edward Viaduct and the water treatment plant that bears his name, said Toronto couldn't afford or support a subway network at this stage of its growth and should focus instead on semi-rapid transit.

The first subway plan was shelved but it's worth nothing how over a century ago transportation experts were calling for an east-west line through downtown. 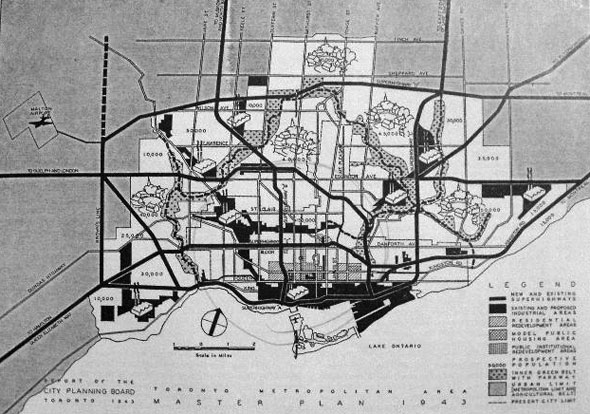 If there's one thing Toronto's transportation planners loved drawing on maps as much as subways in the 40s, 50s, and 60s, it was expressways, or "superhighways." This plan, produced as part of the Toronto Metropolitan Area Master Plan in 1943, imagined high-speed roadways just about everywhere: up Ossington, parallel to Bloor and Eglinton, down the Don Valley, and along Coxwell with a flagrant disregard for the housing and neighbourhoods they would obliterate.

Though several of the highways came to pass, namely the Gardiner, Don Valley Parkway, Queen Elizabeth Way, and, partly, the Spadina Expressway (now Allen Road,) many of the most intrusive routes were abandoned in the face of significant public opposition. The Bloor superhighway became the Bloor-Danforth subway.

Images (in order): "Plan of Torento Harbour with the proposed Town and part of the Settlement," Gother Mann Captain of Command, Royal Engineers, 1788, Library and Archives Canada, NMC4434/5; "Sketch of a design for laying out the North Shore of the Toronto Harbour in pleasure drives, walks and shrubbery for the recreation of the Citizens" (portion,) John Howard, 1852, Library and Archives Canada, N0011447K_a1; "The Guild of Civic Art plan for Toronto" (portion,) 1908, Toronto Public Library, T1908/4Msm; "Jacobs and Davies Toronto Subway Plan," 1910, City of Toronto Archives, Series 60, Item 22; "Plan of that portion of the Marsh and Water Frontage, situate south of lots no5 to 15 inclusive in the broken front Con. in the Township of York showing the development of the property in accordance with the application of Beavis and Browne to the Municipal Council of the City of Toronto. 25th Sept. 1889," 1889, Toronto Public Library, T1889/4Msm; "Toronto Metropolitan Area Master Plan 1943," Toronto Planning Board, 1943, Toronto Public Library, 917.13/T592