Can this condo jumpstart laneway housing in Toronto?

Unlike Vancouver, Toronto has remained relatively untouched by the proliferation of laneway houses. But the idea makes sense: this city has roughly 250 kilometres of laneways, many of them in neighbourhoods with sky-high property prices, almost all of them still fronted by graffiti-covered garages and backyards.

Vancouver's regulations require all houses built on public laneways to be under two stories - the upper floor can only be 60% of the height of the ground floor - and at least five metres from the back of the nearest home. They are typically just 55 square metres and since 2009 more than 800 units have been given the green light, suggesting a serious appetite for small-scale urban living out west.

Lanehouse on Bartlett doesn't look like a Vancouver lane house - it's a cluster of lofts and townhomes that just happen to be squeezed onto a service road off Bloor between Dovercourt and Dufferin - but, should it get the green light, the project could set a precedent for building on Toronto's often overlooked back roads. 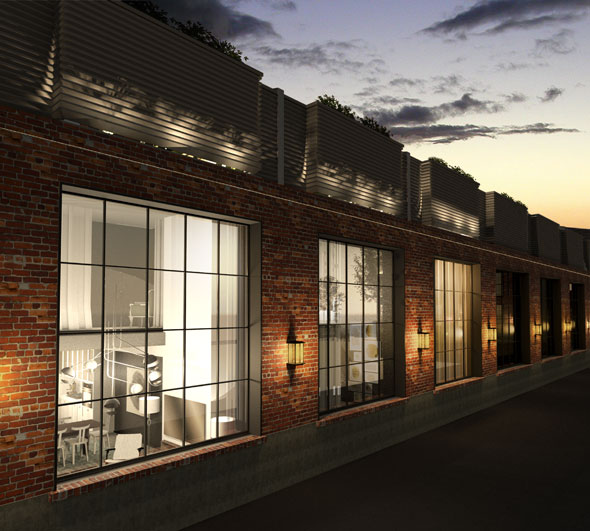 Tucked away off a quiet residential street, the property in question is currently occupied by a low-rise former boiler factory that the developers plan to extensively renovate. A separate block would be built at the expense of an existing home on the main portion of Bartlett Ave., giving the overall building a distinct "L" shape. 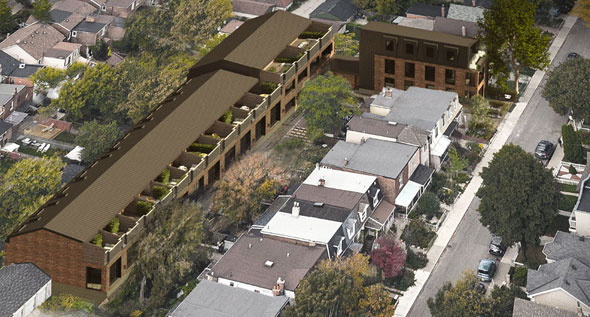 Should it get built, Lanehouse on Bartlett, which mostly consists of two-bedroom lofts, would increase the density of the lot above what is currently permitted. Planning staff are currently evaluating how the increased height and vehicle traffic will affect the surrounding neighbourhood.

As writer Rick McGinnis wrote back in 2010, laneway developers in Toronto also have to prove that sewage, water, and electricity connections can be safely accommodated when sometimes there are none. Garbage and fire trucks need easy access and the neighbours can't be cast in eternal shadow, looked in on, or kept awake at night - stipulations that have lead to creative design tweaks in the past.

Despite the challenges, the space is there. A 2003 study estimated that laneways in Toronto could accommodate 6,150 new homes and generate upwards of $11 million a year in new property tax revenue plus some $30 million in development charges.

The property is currently working its way through the approval process at city hall, and a final report is due in later this year. Should Toronto encourage more of this type of development? Is it time planning staff drafter a set of guidelines like Vancouver for building in laneways?