That time the Toronto Police had a talking police car

Today's Santa Claus Parade will once again feature an auto-riffic appearance from Blinky, the semi-retired Metropolitan Toronto Police Car who for decades has taught kids about traffic safety, inspired and terrified in equal measure. 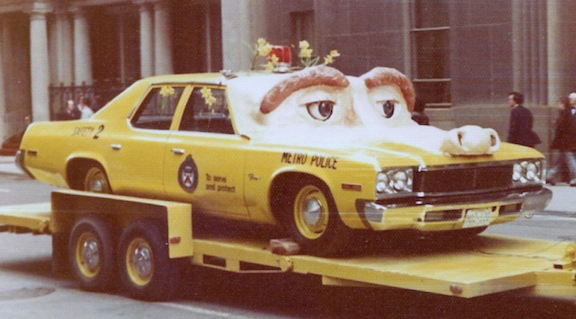 While Pixar may reap the almighty dollar now, it was 1950s era educators and law enforcement who first pioneered the art of targeting children using cars with faces. The Talking Car was an early example, a 16mm educational film made in 1953 by the AAA Foundation for Traffic Safety and used extensively in schools and traveling road-shows.

In Ontario, the job of teaching kids about automobile safety fell to Mr. Beep, a mascot-ish ambassador for big oil magnate British Petroleum. Created in 1957, Mr. Beep appeared in BP's print and billboard advertising and enjoyed massive popularity as a miniature toy car sold for 50 cents at BP gas stations (now worth a small fortune on eBay).

After partnering with the Ontario Safety League, BP created a life size replica out of a Ford Zepher chassis to appear at parades, picnics and the CNE, interacting with children and answering their questions about road safety. In 2013 Mr. Beep found new fame in an episode of History Channel's Canadian Restorers, after the original car was discovered and restored to its former glory.

Meanwhile in Toronto, the Metropolitan Toronto Police were enjoying great success with their safety mascot Elmer the Elephant, created in 1947 by Charles Thorson ("Elephants never forget"). Schools with perfect safety records got to proudly fly the Elmer flag, however one accident or safety miss-step and it would be cruelly revoked, as this archival CBC short illustrates. Elmer was such a mindful motivator that incidents of children involved in traffic accidents dropped a whopping 44% in the years following his arrival in Toronto. 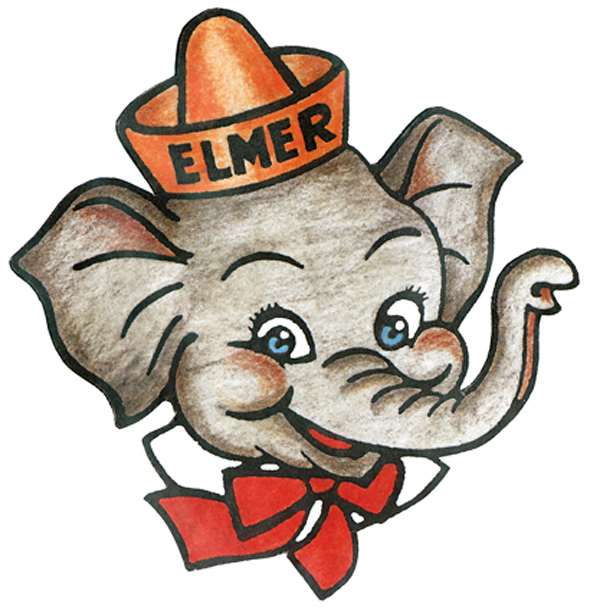 However, after nearly two decades of flying solo in his important mission Elmer badly needed a buddy. In the late 1960s, Metro Toronto Police Sergeant Roy Wilson approached radio station CHUM to sponsor his new creation Blinky, a humanized Police cruiser who through blinking could help teach the ABCs of traffic safety. Based on Wilson's sketches, a standard issue Metro Police Plymouth Fury was modified to incorporate two large eyes and a long nose. A legend was born. 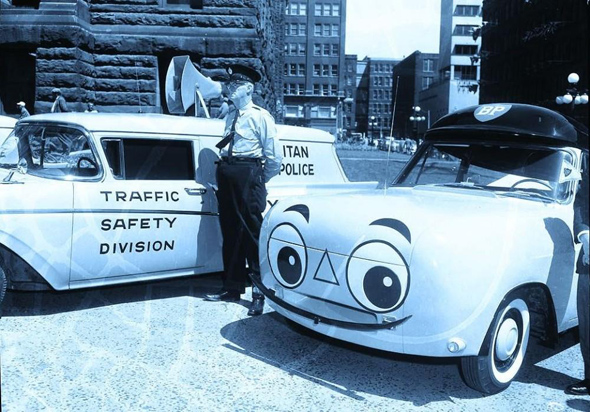 After several early facelifts, Blinky was soon able to wink as well as blink, and given a voice with the addition of speakers built into the nose and connected to a microphone in the cockpit. Blinky's eyes moved back and forth and blinked through an adaptation of the regular windshield wiper system, while the car was operated by a safety officer in a booth located nearby and linked with cables laid neatly across the floor.

As the front windscreen was covered and visibility completely obscured by his "mask", Blinky could not be driven on roads (he did not have an engine either) and so was towed around or remained stationary during his many visits to schools, shopping malls, and most memorably the annual appearances in the Toronto Santa Claus Parade. Elmer now had a friend to march with. 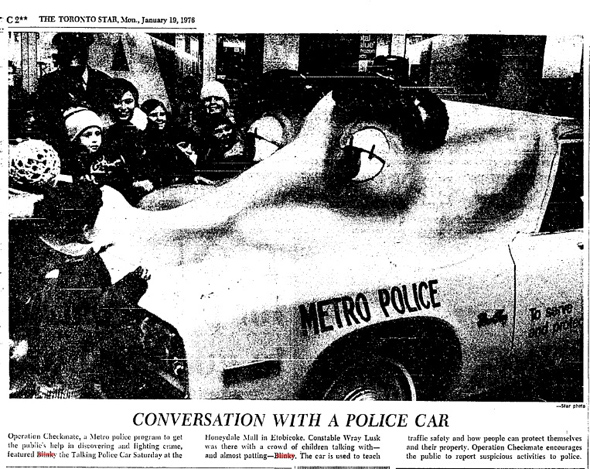 By the mid-1970s, Blinky fever swept Toronto. Irwin Toys and Tonka engaged in a bidding war to win what they viewed as the super lucrative Blinky license allowing them to mass produce toys, t-shirts, and collectables, however the offers were rejected by the Police commission. 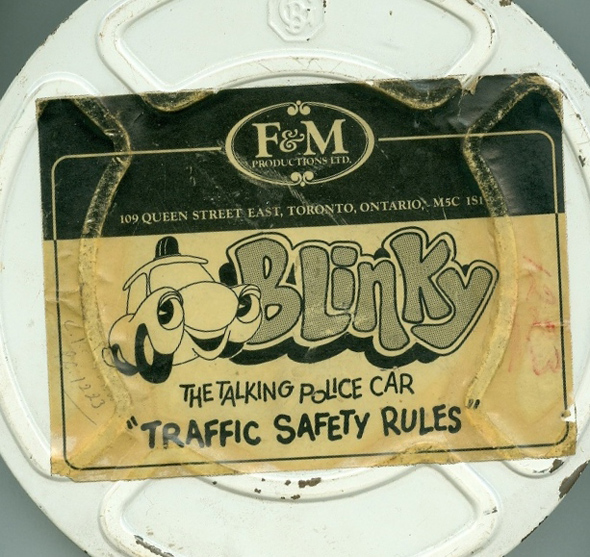 In 1975, The Toronto Star paid $23,500 as a public service to create a short 10 minute animated film entitled "Blinky: Traffic Safety Rules" which was shown on 16mm film in schools across the GTA and aired numerous times on CFTO's police friendly Uncle Bobby Show. Seen by over 100,000 Toronto students in the late 70s/early 80s, the film was thought to be long lost until Retrontario recently unearthed a unique 16mm print at an estate sale. Len Carlson, best known as Bert Racoon in CBC's The Racoons, provided the voice of Blinky.

When visiting school's to discuss road safety, Blinky's modus operandi would change radically depending which grade he was talking to. So while kindergarteners might be treated to Blinky singing a song or reciting a poem about pedestrian safety, 8th graders were treated to a frightening demonstration of Blinky slowly backing over a doll filled with red paint, graphically illustrating the end result of what happens to children who don't properly observe their surroundings - red asphalt. 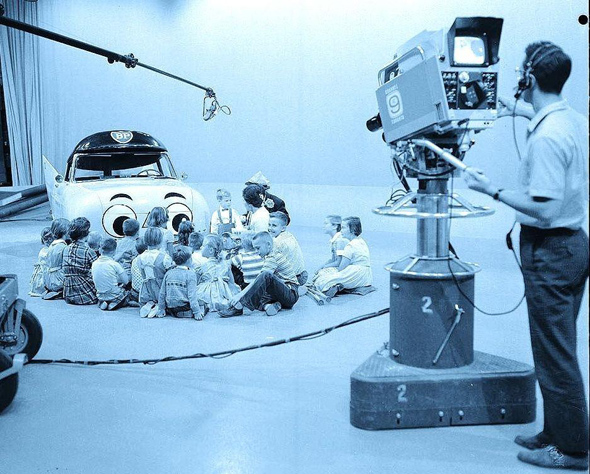 In the late '80s when the entire fleet of Toronto Police cars were repainted and rebranded, the original yellow Plymouth model was retired (donated to the Toronto Shrine, in fact), and Blinky was reborn as a white Ford. Blinky continued to attend the Santa Cluas Parade and the other events, but as the '90s gave way to the 2000s, time began to take its toll on Blinky. 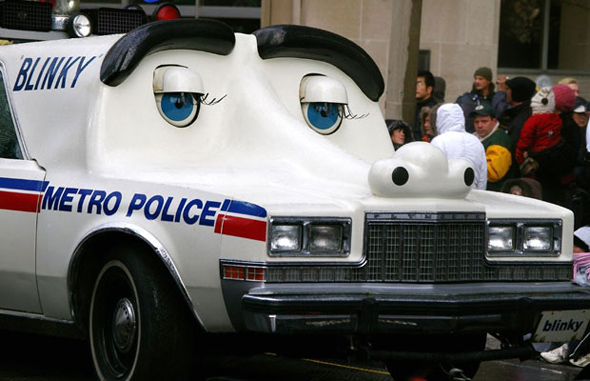 By 2005, Blinky was in a sorry state: the speaker system had been removed, taking away Blinky's voice, and the blinking system had mostly broken down, resulting in one malfunctioning eye that prompted many to wonder what had happened to the former spritely and chatty automobile. 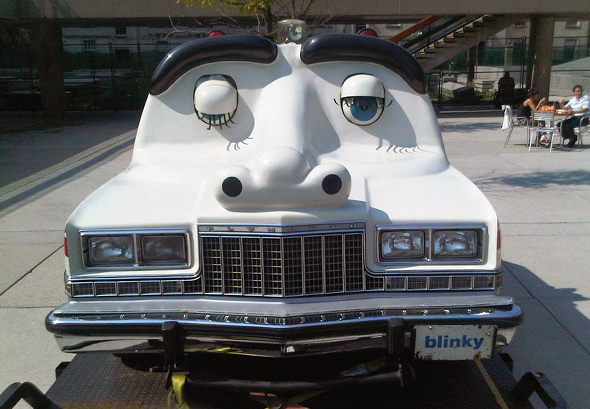 Blinky's creator Roy Wilson retired from the Toronto Police force in 1975 (having joined in 1949), after selling them the exclusive rights to Blinky for the princely sum of $1. He went on to become Wasaga Beach's popular Town Crier. Sadly, Roy passed away on January 20th of this year.

While his Parade bestie Elmer was given a radical make-over several years ago, for better or for worse Blinky remains his same old self. Its seems a criminally missed opportunity that in this age of Pixar's Cars and Disney's Planes the character has not been revised or given more to do. Perhaps the Toronto Police are content to wheel Blinky out annually like many of the other relics of yesteryear who appear in the Santa Claus Parade. But for some, his role in the parade is just as magic, nostalgic, heart-warming and memorable as the big man himself. 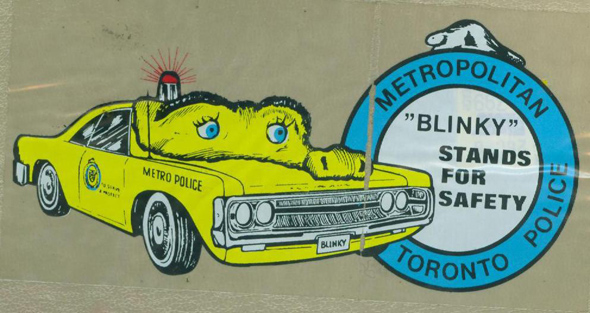 Special thanks to Mike Sale