News out of the Projection Booth / Big Picture Cinema on Gerrard Street East doesn't sound good. A legal notice on the theatre's website claims one of the original three operators, Jonathan Hlibka, has staged a coup, taking over operations against the wishes of the other owners.

"Somewhere along the way, Mr. Hlibka apparently decided that he was the sole proprietor and it became clear that he had been taking company funds into his personal bank account," the notice alleges. The letter continues to say Hlibka changed the name of the business and held "hostage" company assets, including Facebook and Twitter accounts.

Both companies, Projection Booth and Hlibka's new Big Picture Cinemas, lay claim to the theatre on Gerrard Street East and the Metro Theatre near Bloor and Christie. 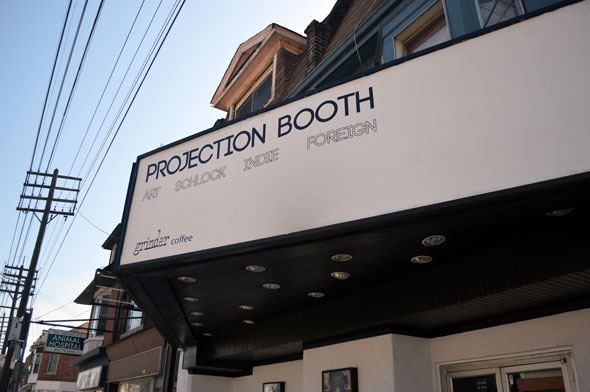 "Nothing is happening to the [Gerrard] theatre, it's business as usual with a bunch of new things in the works," Hlibka said when reached by email. "I've just got my 300+ square foot stage arriving and I have to install it over the next couple of days."

The east end Projection Booth opened in 2011 in the space vacated by the Gerrard Cinema, a East Asian speciality theatre. Under the Studio Film Group, screens show a mixture of rep, art, and indie house fare, even the occasional sneak peek screening.

It's not clear how the war of words will affect day-to-day operations but it looks unlikely the theatre can continue to operate while two apparently separate companies battle over ownership. Watch this space for developments.

In an emailed statement, Jonathan Hlibka claims the Projection Booth website, email, and social media has been "taken over" and used to "spread false and defamatory information."

"Hlibka Entertainment Inc's lawyers, Fogler, Rubinoff LLP are pursuing legal action against this person and we are confident that matters will be resolved in our favour," it continues.

"The name change to Big Picture Cinema we feel better reflects the vision for the cinema, its programming and philosophy."

Today we received a letter from Ms. Sandhu's lawyer who has asked us to include the following statement:

Projection Booth was opened as a 100% owned division of the corporation known as Studio Film Group of which Mr. Hlibka was Director of Operations and CEO. Unfortunately after a domestic assault arrest in November 2012, Mr. Hlibka began to take increasingly aggressive actions to deny this pre-existing fact, using multiple forms of intimidation. Legal action was brought against him in December 2012 and Mr. Hlibka finally responded in mid-July 2013 after being noted in default by the courts.