Toronto street parking gets ugly in wake of snowstorm

The trouble with plowing the streets (now there's an opening) is that the snow tends to get pushed into giant drifts that obstruct the curbside lane. Drivers trying to find a spot to park then have to squeeze into small gaps, often further from the sidewalk than normal, and flirt with causing an obstruction to a passing streetcar.

This weekend was a particularly bad example. The rail was blocked on practically every major route - Dundas, King, Queen, Carlton - sometimes all at the same time. In some cases cars were towed, other times vigilante riders took matters into their own hands and shifted the scofflaws manually. In total, the TTC calculates its streetcars were delayed a total of 45 hours from Friday to Sunday. 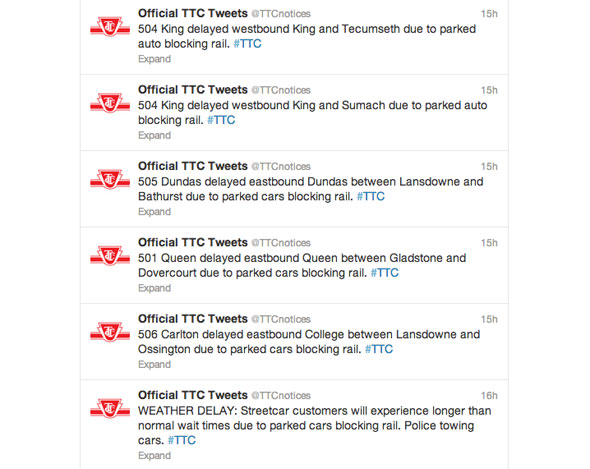 To combat this, the city could have declared an official snow emergency and activated bylaws that prohibit all parking and stopping on major transit routes. There aren't any set rules on what constitutes such an emergency, only that a "significant" amount of snow must fall within an eight-hour period. Regardless, nothing happened, but the problems of this weekend speak to a larger issue when it comes to keeping transit moving.

As I wrote a few weeks back, Toronto has already tried banning street parking and much of the core is still off limits during rush hour. Expanding restrictions beyond has been something of a contentious issue but it might make sense to tweak the existing rules so transit doesn't grind to a halt in the face of wonky parking.

In Toronto, it would be easy to frame any discussion on the removal or restriction of parking spaces as another salvo in the "war on the car," but perhaps we should take a step back, look at the numbers, and see what the city can really do to ensure transit moves smoothly all year round.

As the problem repeated itself over the weekend, Toronto police acted quicker to tow cars that were blocking the rail. Having a vehicle impounded typically costs between $150 and $230, though it seems to vary depending on which company carries out the work.

Officially there were 102 stoppages between Friday and Sunday caused by autos parking afoul of the rail, to use the official term. According to the TTC's Brad Ross, the incidents delayed streetcars by an average of 25 minutes.

Should tow trucks be assigned to streetcar routes in the immediate aftermath of a storm or is educating drivers about parking next to windrows the answer? Should there be bigger fines for drivers that block streetcars? Add your thoughts below.