Monde Condominiums is an absolutely huge new Great Gulf build, optimally slated for right beside Sherbourne Common Park. Yes, a downtown high rise that actually comes with a little green (and I'm not talking about money — well, maybe that too). This condo will rise a full 40 storeys tall, with a 12-storey "podium," and retail at ground level. Plus a laundry list of amenities, two green roofs, and more than 500 units. To reiterate: huge. Here's a closer look at Monde Condominiums. 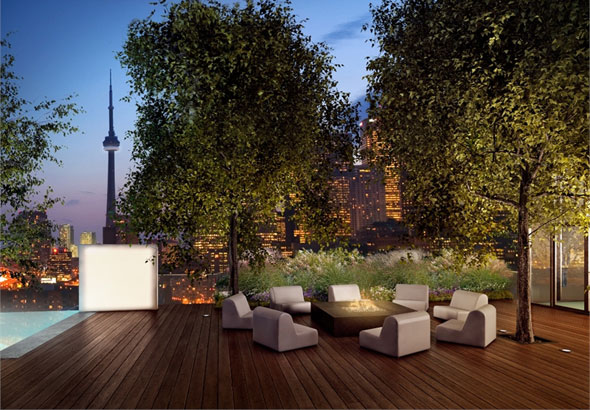 Type of units: One bedroom, one plus den, two bedroom, two plus den 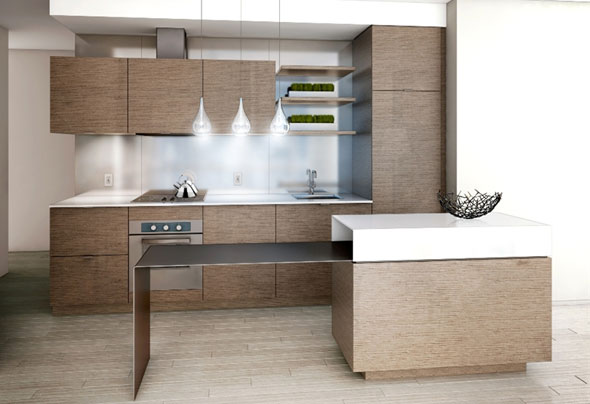 It doesn't get much better than a park right outside your door. And a new one, to boot (meaning Toronto's Sharpie-equipped punks probably haven't even gotten to these benches yet). Sherbourne Common is right next to the Monde Condos site, meaning residents will be privy to its green space, playground, skating rink, and other amenities right when they step outside the building. And all for the low price of $650 (give or take) per square foot! In all seriousness, it is somewhat of a rarity to find a new high rise in downtown Toronto with a park right next door ("parkettes" don't count — sorry, Financial District), and it doesn't get much better (or newer, at least) than Sherbourne Common. This is a perk that resonates especially with pet parents, who know that their puppies deserve more than a little plot of grass or two. Bitches know what I'm talking about.

But onto the building itself. I'm glad to see that Monde has done away with the pitiful 300-something-square-foot bachelor, perhaps recognizing that we humans tend to share our living spaces with other physical objects. Of course, I'm referring to items such as beds, tables, and perhaps an item of clothing or two — items otherwise known as "superfluous non-necessities" to developers touting "condominiums" of parking space square footage. The smallest suite in Monde is a still-livable 483 square feet (plus 55 square feet of balcony), which is not huge by any means, but does offer some room to breathe. 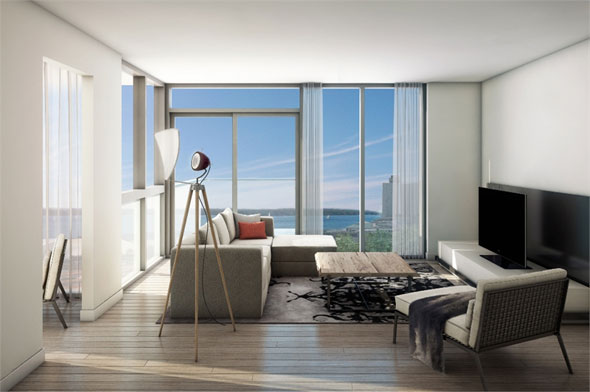 The quality of layout in Monde depends largely on the suite, but it is worth noting that all units come with a standard kitchen island/dining table combination — a definite bonus considering many condo kitchens can be hard to outfit. As well, some one-plus-den units come with a powder room and a full bathroom, and most layouts include bedrooms with actual windows.

And obligatory nerd remark: Monde will be situated in the "Intelligent Community" of Waterfront Toronto, meaning residents will have access to internet speeds up to 100 times faster than me. And you. And everyone else in the city. Damn.

I don't get it, Lower Sherbourne. What's with you and gargantuan structures that occupy and dominate full city blocks? It's a little...off-putting. Sure, it looks great from a bird's-eye rendering, but what about from the sidewalk when all of these log podiums are actually built? Monde is guilty of the city-block-base (does someone need to take a look at zoning here, or what?) with its hefty 12-storey podium at its foot. Not exactly a scenic view for those looking out from Sherbourne Common.

Now, every developer likes to tout its supposedly "groundbreaking" design, and in this case Great Gulf is no exception. I believe the big talking point here is the cantilevered balconies on the tower's odd floors. And yes, they are quite interesting-looking, but they strike me more as ejected stapler trays than breathtaking examples architectural innovation. Or maybe I should just stop staring at my desk. But I wonder, too, about the functionality; if two people want to sit out on the balcony at the same time, must they sit front seat/back seat? Or can they squeeze side by side? 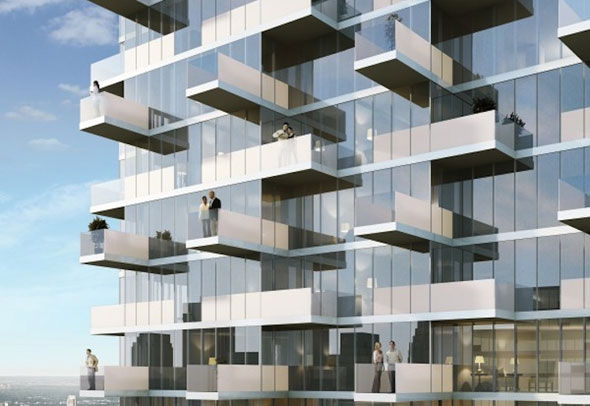 Speaking of squeezing, let's talk about density. Lower Sherbourne is poised to receive a considerable influx of new residents in the next few years, due mostly to the completion of this and other condo projects in the area. Now, the same increase in density could be said of many other neighbourhoods in Toronto, the exception being that Lower Sherbourne will be going from relative desolation (relative — I said relative!) to thousands upon thousands of new residents in a relatively short period of time.

That's not necessarily a bad thing, mind you, but it is likely that there will be at least a few growing pains. Plus, the building itself is a mini-neighbourhood in the sky (and yet, only three of Monde's five elevators are designated for the tower), and with so many people sharing a few common elements, wear and tear on the structure will inevitably get pricey. Add up the (ever-rising, most likely) cost of monthly maintenance fees, plus hydro, plus water, plus gas, plus property taxes, plus interest, and let's hope you have enough left over for that pesky "principle" or whatever it is. Living here will not be cheap, but then again, where is? 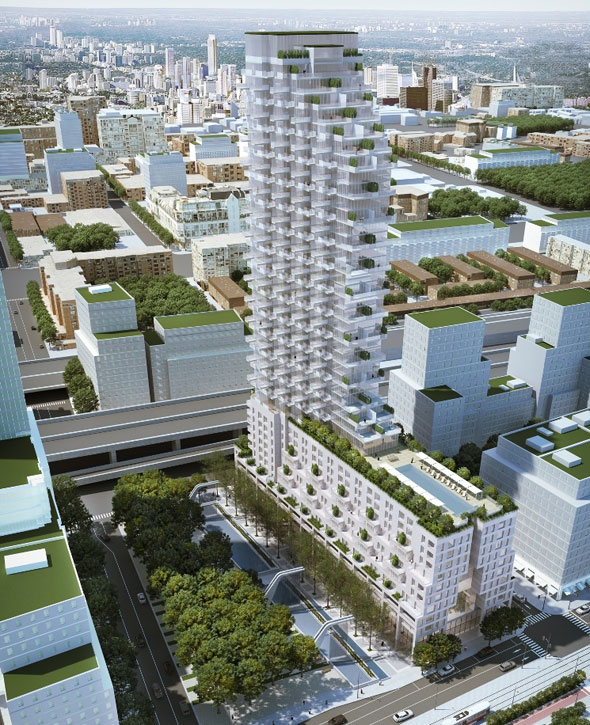 The view from the inside isn't half bad. Let's just hope Sherbourne Common visitors like shade.