Sherbourne Street, apparently, is where all the action is. Recently speaking, at least. Beyond the new separated bike lanes, the brand spankin' new park, the massive project proposed for its south end, and a speckling of new condos, the street hosted quite an engineering feat a couple years back. That (albeit, quite slow-moving spectacle) involved moving the historic 800-ton James Cooper Mansion 100 feet closer to the street to make way for a new Tridel Tower.

And now, developers are hoping for a repeat performance. The City of Toronto has received a proposal to build a 52-storey residential tower at Sherbourne and Selby streets, a project that will require the relocation of another heritage property. That property is currently operating as the Clarion Hotel & Suites, though the structure itself touts a history dating back to 1882 when it was a private family home.

The "Goodherm Mansion," as it's officially known, will be moved closer to Sherbourne Street if developers Cityzen, Fernbrook, and Diamondcorp win their project's approval. 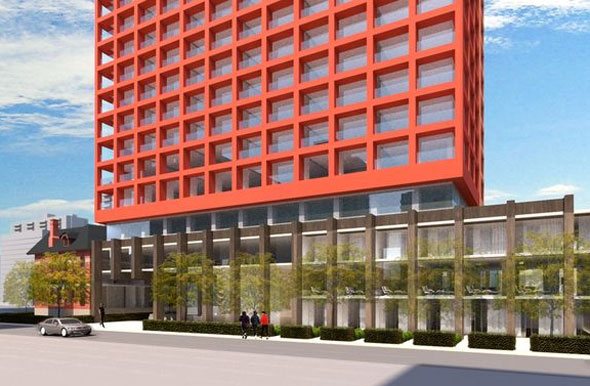 The proposed tower will include 499 residential units (including five townhouses) and is currently portrayed in renderings as boasting a shade reminiscent of Cyndi Lauper's hair circa 1983. Located pretty much beside the James Cooper Mansion 32-storey tower, Big Red at 592 Sherbourne will have 20 floors on its neighbour (and six levels of below-grade parking), effectively blocking the spectacular Rosedale view north-facing James Cooper Mansion tenants have previously enjoyed. Shucks, eh?

But that's not the only impact of this proposed new property to consider. Sherbourne is one of those Toronto streets that is denser at its north and south ends, and a new condo here doesn't exactly attempt to close the rift. Sherbourne north of Wellesley is ripe with condo development (including another proposal for a 42-storey tower at 395-403 Bloor Street East), as is Sherbourne south of Queen with its healthy mix of retail and residential. But in between are a lot of halfway houses and low-rise rentals with menacing bed bug reports. And with this latest proposal, it seems Sherbourne's centre will only continue to sag as development concentrates at the street's ends.

It's also worth considering the value we ascribe to so-called heritage properties when we lift them up and shove them over to make way for shiny new towers. Now, I wouldn't call myself an historical romanticist in the least (though I think I did just achieve a new level of douchiness by using the phrase "historical romanticist"), but I do think it looks sort of tacky to attach a towering glass structure to a 100-year-old mansion and call it urban preservation. Just imagine a block full of siamese historical juxtapositions!

In any case, if the proposal for 592 Sherbourne goes through, we'll have two side-by-side at the very minimum, with rows of Sherbourne heritage properties just waiting for their own tall glass compadres.

Now, where can I get a lipstick in that colour? 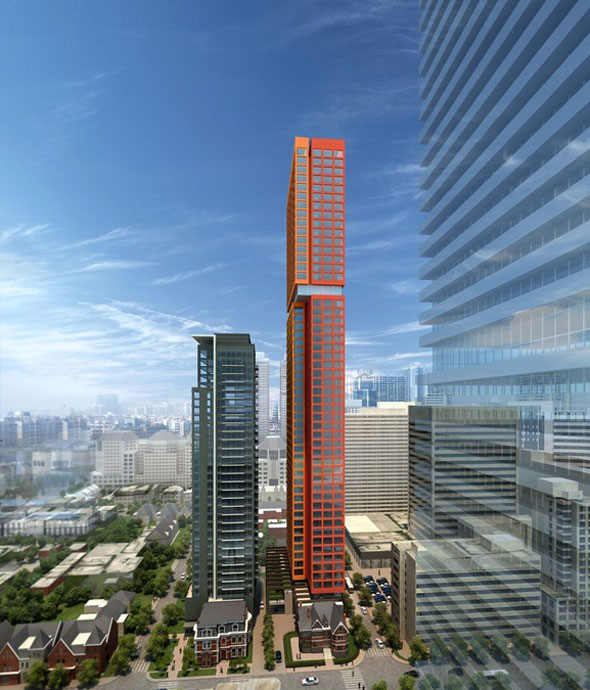