Are we paying more for less on the TTC?

A report from TTCRiders, a Toronto-based transit advocacy group, says the TTC is flunking in several key areas — including the cost of a fare and the quality of service between various parts of the city — after a year-long evaluation of subway, streetcar, and bus services.

In the report, the group identified five "public transit principles" — the cost of tickets, expansion and improvement, accessibility, frequency of service, and environmental sustainability — and evaluated where the TTC stood in terms of achieving those goals. Generally speaking, it's not good. The group found the TTC lacking in all but one of its key criteria.

Perhaps surprisingly, the TTCRiders says the commission is hitting the mark when it comes to building modern, city-wide rapid transit, praising the recent revival of Transit City and the renewed discussion on the various ways to fund further expansion.

At the fare box, though, it's another matter. TTCRiders calculate that 70 percent of the money collected through tokens and passes is used to fund day-to-day TTC operations. In other cities, that figure is is as low as 45 percent thanks to the use of taxes and other revenue tools to supplement money collected directly from riders. Surely that's a reason why we have the most expensive transit system of any major city in North America.

Frequency of service is another beef. According to the report, the number of trains, busses, and streetcars operating in the city does not match climbing ridership numbers. Using a service to ridership ratio, the paperwork shows a 12.5 percent increase in the number of riders since 2006 and a drop in service since 2009. Bottom line: we're paying more money for less service. 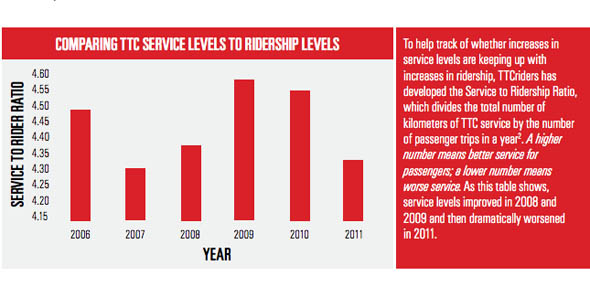 What's your opinion on the group's findings — have you noticed similar things while riding the TTC recently? Obviously we would all like lower fares, but are you happy to pay for upgrades and maintenance while you ride? The comment thread awaits.

Photo: "Walk around Forrest Hill" by kaeko in the blogTO Flickr pool. Illustrations: "The State of Public Transit in Toronto" by TTCRiders.