Retrontario revisits the birth of the Blue Box in Toronto

While it may be a mundane part of everyday life now, the blue recycling box was once a shiny new innovation that needed a campaign and a canine personality to sell it to the Toronto masses in the fall of 1988. Invented and championed by Toronto's chain-smoking environmentalist guru Jack McGinnis, the City came up with the concept to "Feed Blue," portraying the blue box as a hungry dog that just wanted to be fed, a surefire strategy to keep those boxes brimming with the right stuff - plastic, glass and pop cans (although sadly, as it was then and now, no VHS tapes).

Feeding "Blue" worked. By the fall of 1989, over half of Metro households were using the box, and Ontario Environment Minister Jim Bradley was gladly accepting a United Nations environmental award for the Blue Box recycling program. Amazing that the last time someone bolted big eyes and a face to an ordinary household object in the name of environmental progress, it mentally scarred a generation.

Print ads and more commercials followed, but "Feed Blue" was retired in 1992, and now 24 years later, we have Chuck and Vince â "We Want It!" instead. Our pop cans are bigger, too. Progress? Maybe. 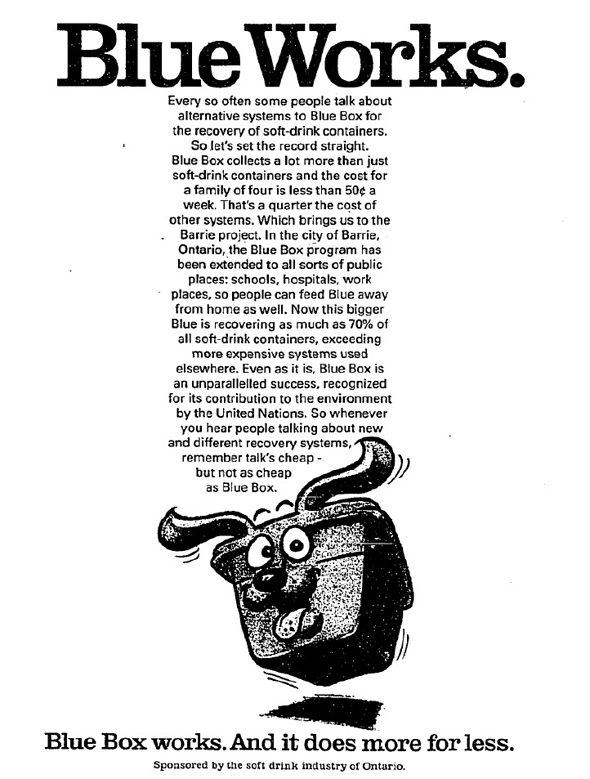 Written and compiled by Ed Conroy