How a long, sandy beach became the Toronto Islands

It might be hard to picture today, but Toronto's famous islands haven't always been an oasis away from the mainland. In fact, the Islands are a relatively recent natural creation traceable to a single powerful storm in the 1850s. Before that, the land now home to Centerville and Billy Bishop airport maintained a permanent physical connection to the rest of Toronto.

We've looked back at the Islands' past before, but never discussed how the land itself became permanently separated from the shore and evolved into the idyllic spot it is today.

The earliest available records describe what is now Centre Island and its surroundings as an nine-kilometre sand spit attached to the mainland roughly at the foot of today's Woodbine Avenue. Like other spits in Lake Ontario at Presqu'ile and Long Point, the material that forms the Islands was eroded from the mainland and deposited in a narrow strip by the motion of lake water. The millions of tons of sand that forms the Toronto Islands was once propping up the Scarborough Bluffs. 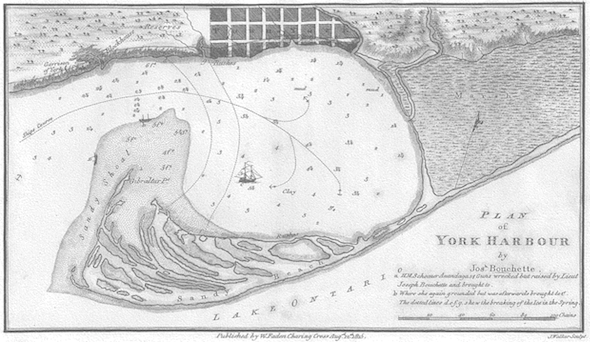 The original users of the sand spit were First Nations hunters and fishers, most recently the Ojibwa, who also regularly visited Ashbridges Bay, the Don River and the lakeshore to gather food. The site was first surveyed in 1792 by Lieutenant Joseph Bouchette of the Royal Navy - the map above was one of several he produced of the Toronto harbor.

Elizabeth Simcoe, the wife of John Graves Simcoe, provided an early written description of the land in her personal diary after one of her frequent walks in the land surrounding York soon after arriving in the area:

"We rode on the Peninsula so I called the spit of sand for it is united to the mainland by a very narrow neck of ground. We crossed the Bay opposite the Camp, & rode by the Lake side to the end of the Peninsula.

We met with some good natural meadows & several ponds. The trees are mostly of the Poplar kind covered with wild Vines & there are some fir. On the ground were everlasting Peas creeping in abundance of a purple colour. I was told they are good to eat when boiled & some pretty white flowers like lilies of the Valley."

The natural harbor created by the sand spit must have been a major draw for John Graves Simcoe when he founded the town of York. The threat of attack by American forces was still a very real possibility and the protection of the sandbar would have provided a valuable advantage to forces defending the nearby town. At the time of its construction, Fort York guarded the only entrance to Toronto's bay. 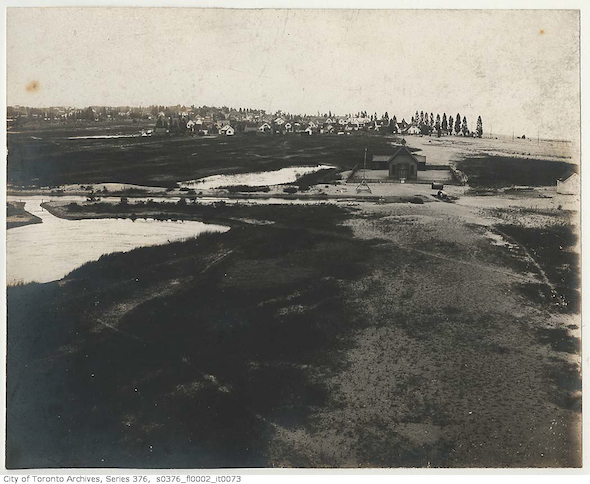 In 1808, the Gibraltar Point Lighthouse was one of the first buildings constructed on the Islands. Once close to the shore, the area has been infilled and landscaped over the years, moving the building inland.

The lighthouse is famous as the scene of a grisly unsolved murder purportedly carried out by local soldiers looking for bootlegged booze, or perhaps alcohol tax duty, at the lighthouse (the motive for the crime is unclear all these centuries later.) The body of the victim, German-born lighthouse keeper J.P. Radelm端ller, was never found. Two soldiers were charged with the crime, but neither were convicted. 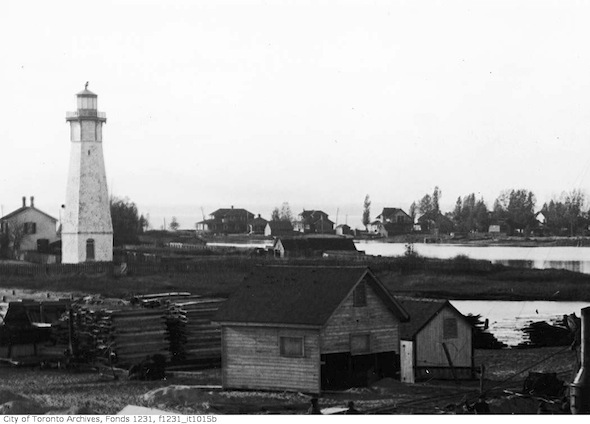 On the night of April 13, 1858, the sand spit was turned into the Toronto Islands when a severe storm breached the spit and allowed water to flow from the lake into Toronto Harbour. Later named the Eastern Gap, the hole was significant enough to permanently sever the connection to mainland but was too shallow for large boats to shortcut through to the area that would become the Port Lands.

Over a hundred years later, in 1973, the federal government spent over $10 million dredging the gap deep enough to handle all ship traffic in and our of the Inner Harbor. The material pulled from the lake was used with other fill to create the Leslie Street Spit (officially the Outer Harbour East Headland) - part of an aborted project to create an Outer Harbor and protective headland. 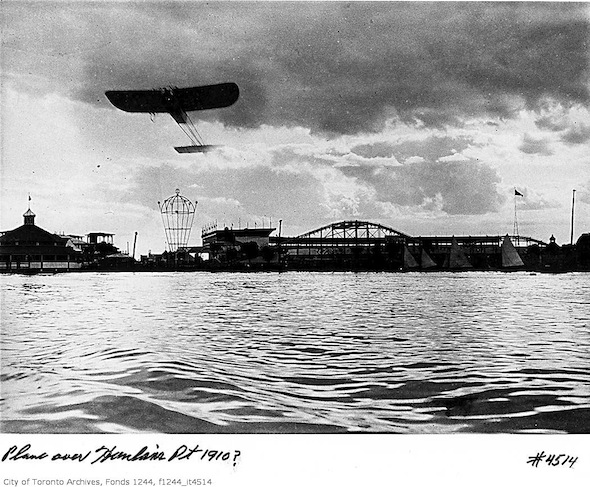 Separated from the mainland, the Islands grew up as one of Toronto's most important recreational spaces. Home to a popular amusement park, Hanlan's Point Stadium - the ball park famous as a home of the Toronto Maple Leafs baseball team and site of Babe Ruth's first professional home run, numerous hotels and yacht clubs.

Today, the largest urban car-free environment in North America is still a big draw for tourists and city residents alike. If it wasn't for the storm of 1858, the Islands easily have become an urban extension of downtown packed with cars. Thanks, mother nature.

Note: An earlier version of this post misspelled the name of the lighthouse keeper, J. P. Radelm端ller.