What could have happened to Maple Leaf Gardens

When news first broke in 2004 that Loblaws had purchased Maple Leaf Gardens, heritage enthusiasts were immediately alarmed. While the company's proposal for the building would preserve its facade, the ice surface and many other features of the old arena would be lost to grocery aisles. Despite a competitive offer for the site from Ottawa Senators owner Eugene Melnyck that would have kept the building as an amateur sports facility — ice rink and all — Maple Leaf Sports and Entertainment wasn't much interested in keeping intact what they thought might prove to be a competitor to the Air Canada Centre.

Following Loblaws' purchase of MLG, the building sat empty for five years before an announcement that a partnership had been reached with Ryerson University to co-occupy the space. The Gardens would once again be home to an ice surface, just not at ground level. I've told the rest of the story with numerous posts on the renovations of the former home of the Maple Leafs, including the unveiling of the flagship Loblaws in late November, but there's one element to which I've given short shrift: what happened to MLG's peer buildings, the other original six arenas around the league? And how does the adaptive re-use of the Gardens stack up against them? 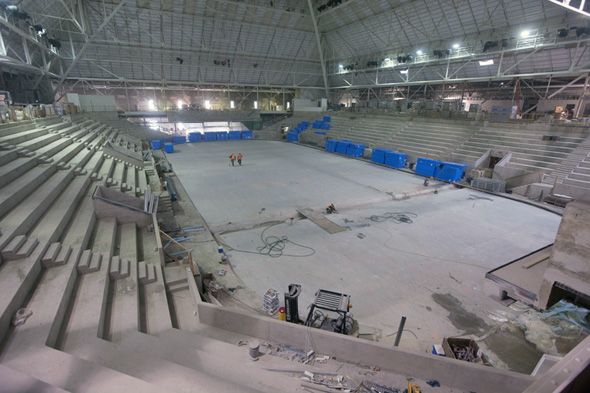 As it turns out, extremely well. In an intriguing article for the Atlantic Cities today, Mark Byrnes tracks the fate of the Montreal Forum, Boston Gardens, Chicago Stadium, the Detroit Olympia, and Madison Square Garden III. With the exception of the Forum, which is now a shopping mall / entertainment complex, they've all been demolished. This isn't news, of course, but what the Google satellite views in Byrne's article drive home is what a great loss these cities have suffered — and the fact that we did it better than the other guys.

It's rare that you can say that about heritage preservation in Toronto. So while it's still sad the MLSE wouldn't consider Melnyck's offer, it's worth noting that the MLG we have today is a hell of a lot better than what could have happened had the building been treated in what you might call typical Toronto fashion. Is the muted satisfaction I express here a sign of lowered expectations? Perhaps, but I'm still glad that the Gardens escaped the fate of its fellow arenas.

Make sure to have a look at Byrne's article here.