The not so hidden costs of underground LRT

There are many arguments to be made in favour of the Transit City plan, mainly focusing on capital expenditures, the viability of light rail, and the size of the transit network that can be built. Those arguments have been made and continue to be made very capably by others, most recently at last Wednesday's council debate. What no one seems to be talking about though, is the practicality and long-term upkeep costs of buried stations vs. surface level stops, and how that will affect the TTC's operating costs. To me, these are questions that anyone hoping for a revival of the Fords' "vision" should ask, because ultimately a line that costs significantly more to run, is going to cost more to ride as well.

Before I get started, one fact needs to be established. This is not a debate about streetcars vs. subways. Neither Ford's plan, nor the Stintz/Transit City plan involves an Eglinton subway. In both cases the plan is for a light rail line, using Bombardier Flexity low-floor LRVs. The issue is whether the entire line would be buried (Ford's plan) or if it would run above-ground for much of its route, buried only between Laird and Keele (Stintz/Transit City plan). Any mention of subways in this debate is an attempt to cloud the issue, plain and simple.

Having established that this will be an LRT line, regardless of who gets the final say, let's start with where the LRT is going to stop. Toronto currently has one underground LRT stop, at Queen's Quay. It consists of two platforms with a walkway across the tracks to move between them, two entrance stairwells, and an elevator. Seeing as entrances, platforms, and wheelchair access are all necessities, it seems safe to assume that each stop on the Fords' underground LRT would have to be of similar design. If so, we need to talk about maintenance.

Having done various maintenance jobs at the TTC, I have a rough idea of what goes into keeping such a facility up and running. Queen's Quay is visited three times a day, for roughly half an hour each time, by cleaning personnel. In addition, it is visited by overnight heavy cleaning crews on a monthly basis. It is lit by over 100 fluorescent light bulbs, which run 24/7, increasing electricity costs. Two people spend roughly two or three shifts in the course of a year maintaining the lights, and the bulbs are changed every second year.

The entrances need to be cleared, and kept clear in the event of a snowfall, and someone has to be paid to do that. Because someone has to clean down there, there is a water feed and a sump pump. This means plumbers must visit the station for scheduled inspections and occasional repairs. The elevator also must be inspected and maintained on a regular basis, and in the event of a breakdown, it requires repair, which sometimes means a complete overhaul. 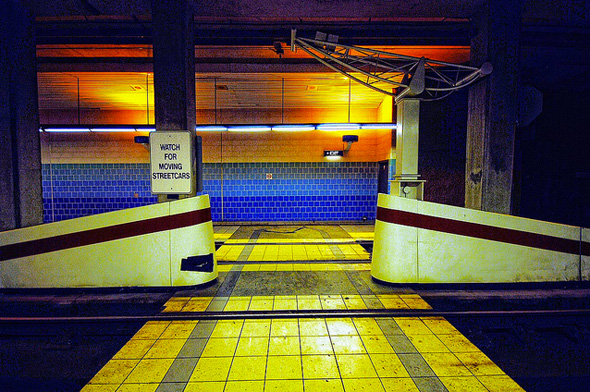 If you build a station, even a small one, there are significant upkeep costs. Whether the people doing the maintenance work are TTC employees or contractors, that work is still being done, and your fares are still paying for it. The city's above ground transit shelters, which involve less maintenance and are owned and maintained by Astral Media have virtually no effect upon the fare you pay.

Moving beyond maintenance though, let's discuss security. Queen's Quay, by way of example, is an unmanned station. TTC personnel do pass through there, due to the aforementioned maintenance tasks, and operators in the streetcars themselves keep an eye on the station. But what about stations in less populated areas?

Unsupervised, underground, out of view of passing motorists and local residents â is this a place you want to wait for a transit vehicle at 1 a.m.? Obviously this would be more of an issue in some areas over others, but to me, an unsupervised, out-of-the-way spot, where no one can hear me call for help seems like a bad place to spend my time. I would be much happier at an above-ground stop, visible to passing motorists, and from the windows of nearby buildings. So let's assume we can't leave these underground transit stops unsupervised. Would each one have a collector? Some sort of station attendant? A security guard? Either way, the TTC would be paying for someone to be there, and the ridership would be paying the TTC more to make that happen.

Doug Ford has suggested that if the Eglinton RT ran completely underground, it could be entirely automated, which I suppose would compensate for any extra costs incurred in station maintenance, but is his vision realistic? Even if the vehicles themselves were automated, would it be reasonable to run them without a paid attendant, who could contact emergency services in case of criminal activity, or a medical emergency on board? Would it be reasonable to have no one on board to oversee an evacuation through underground tunnels in case of a fire, blackout, or other emergency? Besides, Bombardier doesn't even mention this as an option in their specs on the Flexity Freedom.

Another question is how many stops the line should have. The more stops there are, the more you pay. The fewer there are, the further you have to walk if you happen to live in between two of them. If they are too far apart, would buses still have to run along Eglinton to service the areas between LRT stops, much like the Yonge 97 bus has to service the areas between subway stations? An above-ground LRT, by contrast, requires less infrastructure, meaning that stops can be much closer together.

There has been some noise from the Ford camp about how an above-ground LRT will force the people of Scarborough to wait outside in the cold, but if they have to hike to the station in the cold, or wait in the cold for a bus to take them there, is that really any better?

Finally, there's the matter of street level construction and the disruption to traffic, businesses, etc. that accompanies the building of an above-ground light rail right-of-way. This is undeniable. People remember when St. Clair was all torn up, and so references to "The St. Clair Disaster" can be very effective, despite evidence that it worked out quite well in the long run. The proponents of a buried line though, would have us believe that subterranean rail lines can be built without any disruption to day-to-day life on the surface. This is not going to happen. In the areas where the LRT will remain buried under either plan, property will need to be expropriated to make room for stations. There is far more involved in creating an underground transit line than simply boring a tunnel, and the idea that it can be done without any disruption above ground is absurd.

So much of Rob Ford's campaign has been about intelligent and responsible use of our money, and many people, understandably, like him for that reason. No matter how much one supports him though, he should not be immune to scrutiny. When he proposes to spend more money to build a much smaller transit network, and everything he proposes to build involves higher upkeep costs than the alternative, it is time for even his fiscal conservative supporters to start asking questions.