Reaction to the firing of TTC GM Gary Webster

That the TTC board voted to fire General Manager Gary Webster yesterday didn't ultimately come as a shock given all the talk about the meeting prior to its taking place, but now the task is figuring out what it means for Toronto's transit future and for the relationship between the mayor and city council. Here's a sample of the speculation and reaction that's circulating in the wake of yesterday's decision.

There are times when situations arise that are outside of our control. But the one thing we always have control over is how we respond to those situations. I ask that you respond to all of this by doing what you all do so well - by continuing your professionalism and delivering the safe, courteous service that our customers expect and deserve. — Excerpt from an email sent to TTC employees posted by the Star.

"I support the Commission's decision on the departure of Mr. Webster. Gary has served Toronto and the TTC well in his years of service. He was an important element in the organization's many successes to date and can proudly point to a list of accomplishments.

The imbroglio over Toronto transit is unprecedented. The transit commission, though a separate legal entity, always defers to city council, as council approves its budget and appoints the commissioners. Now, add another log into a raging fire — a mayor unwilling to abide by city council's decision — and fireworks begin.

"Mayor Ford was elected promising subways over light rail. He said the private sector, not taxes, would build it. For a year he's failed to show how, but killed the light rail plan. And he has not sought a city council vote." — Royson James

"Thankfully, the five commissioners who voted for Webster's axing -- Denzil Minnan-Wong, Norm Kelly, Vince Crisanti, Cesar Palacio and Frank DiGiorgio -- were having none of this leftist theatre of the absurd.

I knew Augimeri was a lost cause. But I still can't understand why TTC Chair Karen Stintz, Vice-Chairman Peter Milczyn and Commissioner John Parker so vociferously supported a CGM who has been out of his depth for years, is downright resistant to change, failed to improve customer service, runs a secretive organization rife with nepotism and can't seem to bring a single major project (capital, IT or whatever) within budget." — Sue-Ann Levy

The Globe and Mail

"Firing him now reeks of spite. It confirms what many people already feel about the mayor's blunderbuss, my-way-or-the-highway approach to governing the city. It conflicts with the mayor's pledge to cut waste. Firing Mr. Webster only a year and a bit before the end of his contract could cost the city $500,000 and more.

Worse, it sets a dangerous precedent that could intimidate the other leading public servants who advise the mayor and city council on public policy. Only weeks ago, Toronto Ombudsman Fiona Crean warned about the increasing politicization of the public service. "It can be exceedingly difficult for staff to speak truth to power and provide their best advice as dutiful public servants." — Marcus Gee

The Post points out — via the citation of a previous article published in the paper — that Webster's predecessor left on account of political manoeuvring. 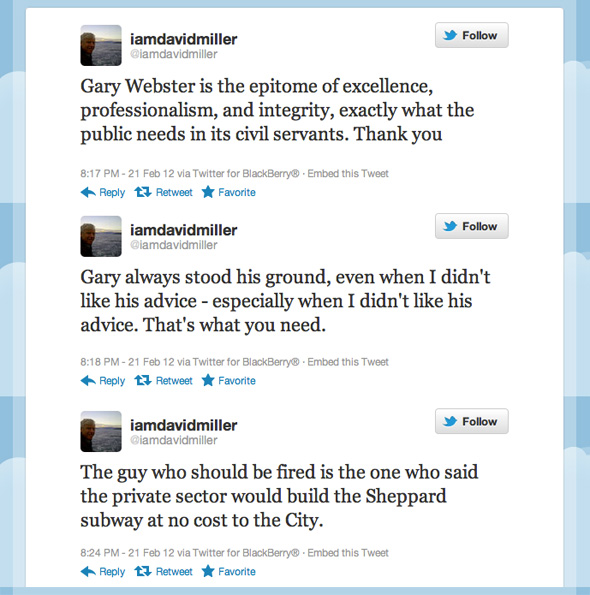