A brief history of the Dufferin Gate at the CNE grounds

Over its history the CNE has evolved from a travelling agricultural show into Canada's largest fair. Once the main entrance to the exhibition grounds, the Dufferin Gate at the foot of Dufferin Street has welcomed excited visitors to a world of innovative, thrilling, ingenious and bizarre exhibits for over well over a century.

The original Dufferin Gate was built in 1895, seventeen years after the first permanent exhibition was held on the site, to serve as the principal route into the exhibition grounds. The area in front of the small wooden structure served as a natural meeting place for groups preparing to enter the Ex. 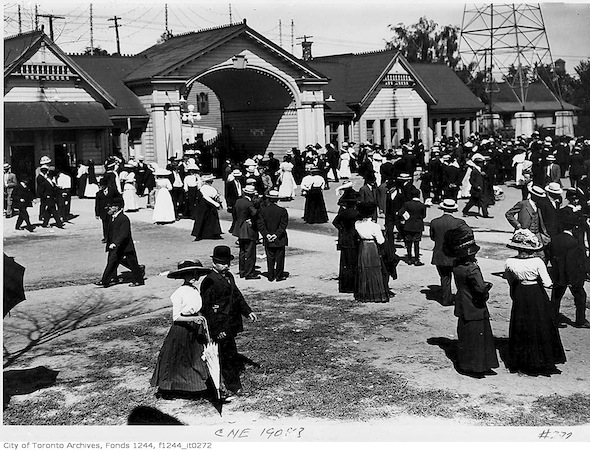 In 1910 the wooden entrance was torn down and replaced with architect G. W. Gouinlock's grand structure.

Designed to act like a funnel, single-storey wings curved away from the towers on either side of the entranceway ending in small, domed pavilions.

Complete with a streetcar and railway stop, the new gate was decorated with flags, lightbulbs and garlands, lending the place a "deliberately theatrical" look, according to William Dendy in his book Lost Toronto.

Once inside, visitors were presented with a tree-lined view leading down to the lakeshore.

The area between the towers was filled with electric bulbs in the shape of two maple leaves in 1927 to celebrate the 60th anniversary of confederation.

That same year the Dufferin Gate ceased to be the principal entrance to the Ex as the Princes' Gate at the east end of the grounds was completed and dedicated to the Prince of Wales. 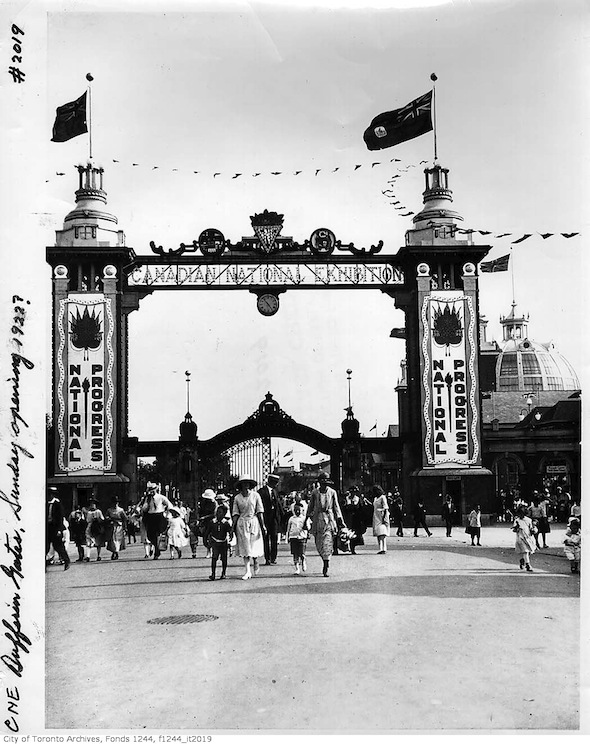 The second incarnation of the Dufferin Gate was demolished in 1959 during construction of the Gardiner Expressway and replaced with the arch currently on the site.

William Dendy, always a critical voice when it comes to the destruction of historic buildings, describes the concrete arch as "meagre, cheap and trite" in comparison. 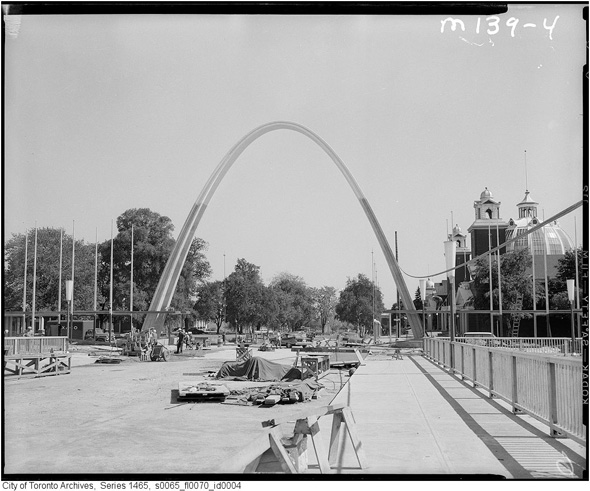 Looking like a scaled down version of St. Louis' Gateway Arch (though it preceded it by four years), the current Dufferin Gate is intentionally narrower by necessity due to the space consumed by the Gardiner.

Interestingly, the current gate might actually be repositioned in the near future to accomodate renovation work on the bridge immediately to the north.

Comparing the various structures, it's hard not to mourn the loss of the festive second Duffern Gate with its lights and flags to the stern parabolic arch. 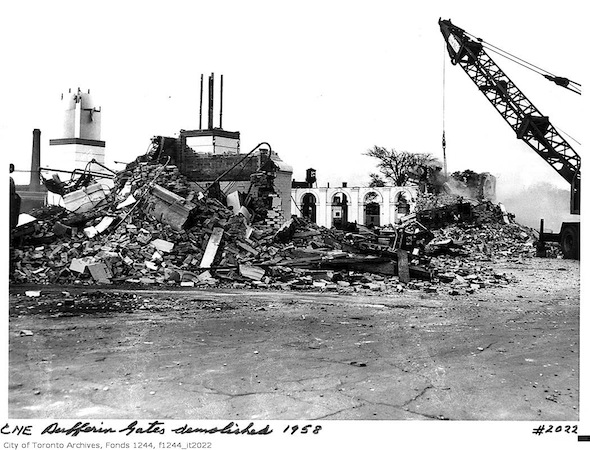