"This subway plan is realistic, it's affordable, and it will deliver real benefits for people living and working in Toronto in time for the 2015 Pan-Am Games." â Rob Ford

This is one of those exercises that probably doesn't require much by way of analysis. With some things the showing is the telling, and such is the case with the transportation plan that Rob Ford campaigned on in 2010. Our mayor has taken his fair share of heat for his promise "that services will not be cut, guaranteed," but that's not the only aspect of his platform that deserves scrutiny. I touched upon it yesterday in writing about the rapid transit gap that faces Scarborough in 2015, but Ford's transportation plan is worth a longer look, if only to underscore just how laughable it was in the first place.

As Ford's first year in office officially comes to a close, Toronto has witnessed the death of Transit City, a reduction in cycling infrastructure, the announcement of service cuts, a significant capital shortfall, and a possible fare hike on the TTC (which could be as high as 15 cents), and still no sign of funding for the Sheppard subway extension or much by way of progress on the 100km worth of paved off-road trails for cyclists.

Here, on the other hand, are some highlights from Ford's transit vision fantasy. 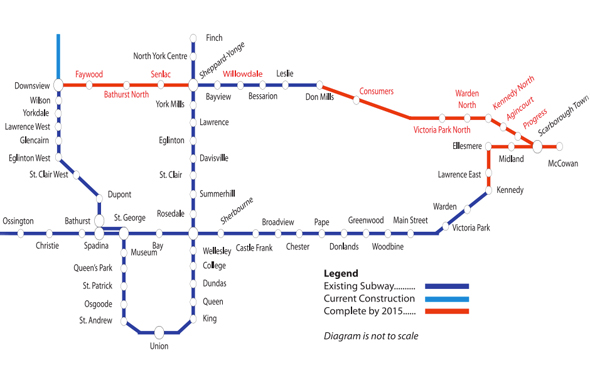 In fairness, the other candidates' transportation plans weren't necessarily altogether that realistic, but there has to be some accountability for such outlandish commitments. And if there isn't, at the very least, the voting public should remember what was promised in the first place. Or perhaps there are still some people out there who believe this will all come together in the next couple of years?