A history of public toilets in Toronto

Everyone knows what it's like for nature to call when you're miles from a clean and comfortable bathroom. Often sneaking unnoticed into a busy fast food joint is the only viable option in a crisis, and even then you have to cross your fingers you don't get someone else's urine on your shoes. If you think about it, shouldn't there be more public facilities to cater to such an everyday necessity?

Toronto's first public bathroom was installed in the heart of the city's financial district at the intersection of Adelaide and Toronto Streets in 1897 (see photos above and below). Located below street level, needy patrons descended a few steps into a tiled room containing three stalls and a few sturdy ceramic urinals. An attendant polished up dirty boots and supplied towels and soap for 5 cents. 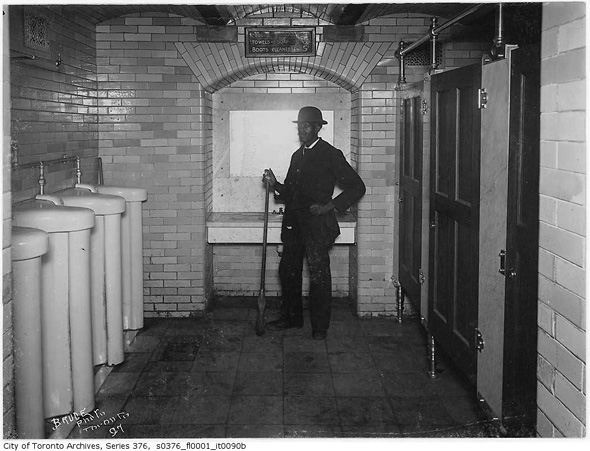 The project was successful enough for five more underground lavatories to be built around the city. The most popular was located in the middle of Spadina Avenue just south of Queen, roughly where the streetcar tracks run now. Some estimates suggest the bathroom in its heyday â and I can't help wondering who counted â processed at least 50,000 "transactions" a month. That stat becomes a little less surprising when you see some of the bleak johns people had at home in the early part of the last century.

As Simon Wallace has written about for the Toronto Standard, these facilities also as served as rendezvous points for working-class gay men, who rarely possessed their own private space in a city dominated by single-family homes. "Found in every poor neighbourhood and every public space, [public lavatories] provided privacy and became the preferred places for gay men to meet," Wallace explains. "Holes, glory holes, were cut between stalls to allow for sexual contact, doors could be locked and men could enter the building together without necessarily arousing suspicion." 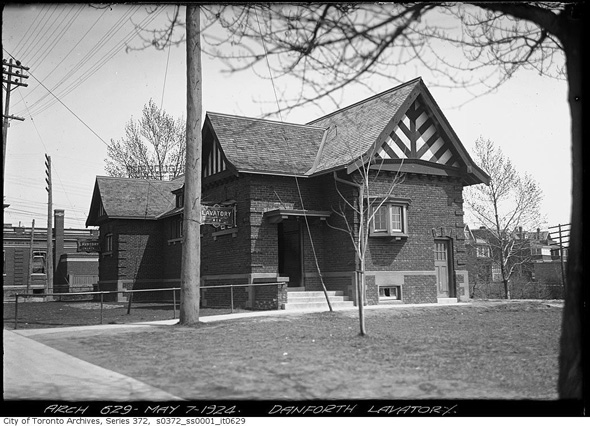 As the years went by and demand continued to increase, more public bathrooms were built around the city. Above ground structures with separate toilets for women (there weren't any female toilets in the first buildings) were constructed at popular gathering places and major transit transfer locations. One of these new buildings was built in 1920 at Broadview and Danforth near the newly completed Prince Edward Viaduct.

Designed to match the surrounding neighbourhood, the red-brick, wood and stucco building was fitted with wooden stalls and shining brass fixtures. Dormer windows bathed the space in natural light. 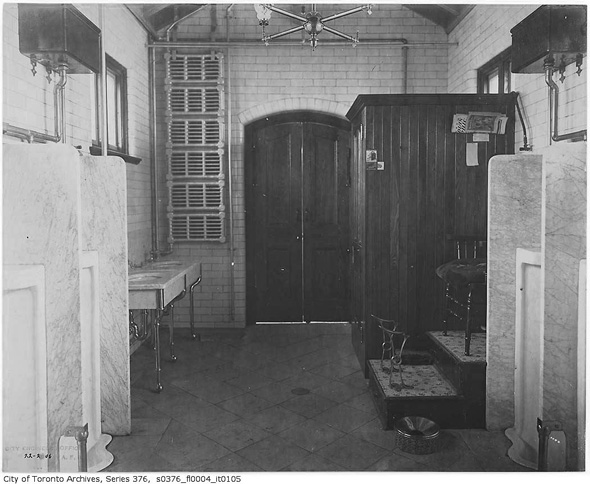 As time went by, this bathroom and many others like it around the city saw a gradual decline in use as cafes, restaurants and stores began offering their own.

The city ran the Danforth facility until a 1987 study put the maintenance on the building, which included two full-time attendants, at $500 a day - the equivalent $17 a flush for each of the approximately 30 daily users. The bathroom closed the next year and the fixtures were torn out. Thankfully, the sinks were salvaged and are now in installed at the Blue Barracks at Fort York. After several years spent vacant the building is home to a kindergarten. 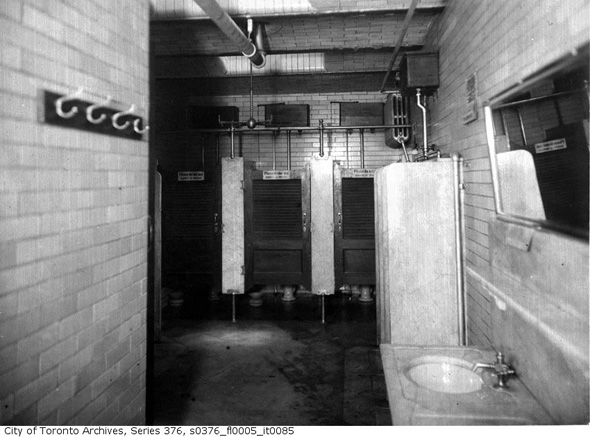 Luckily for us losing the old-style conveniences hasn't meant the end of Toronto's public bathrooms. Last year the first in a new fleet of automatic privies was installed at Queen's Quay and Rees Street. Today, a quarter buys 20 minutes of chemically sanitized privacy - more than enough time to take in the spacious interior and enjoy the pleasure of relieving yourself to light musical accompaniment. When time runs out, the unit seals up (or calls for help if you're in trouble) and hoses itself down. Welcome to the future.

19 more of the potties are scheduled to appear at various downtown locations over the next few years. The heated and air conditioned structures might cost $400,000 and look from the outside like advertising boards with septic tanks screwed to the back but it beats flushing with your foot in a sketchy greasy spoon. 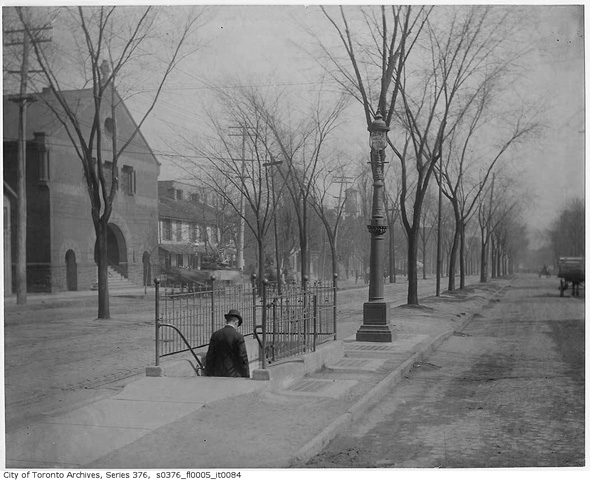 Check out our History of Toronto in photos form more nostalgia tripping.