Is the City plotting to end Occupy Toronto?

A briefing note distributed by the mayor's office on Monday might be one of the first signs that the City will not allow Occupy Toronto protestors to remain in the park. Obtained by the Toronto Sun, the note makes no mention of a timeline or a concerte course of action, but expresses concern at recent developments in the park as well as the potential cost to repair the grass once the occupiers do leave (estimated at $25,000).

"The erection of yurts on the weekend of Oct. 29 meant that the presence of people supporting the Occupy Toronto movement moved from one of protest to occupation," it states. "The local community has been prevented from using their park for three weeks, with no end appearing to be in sight." 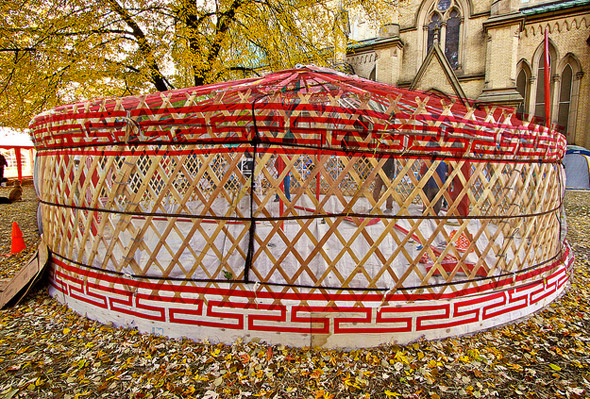 Who knew? The Occupy movement actually plans to, well, occupy the park! Reading between the lines, however, it seems as though the semi-permanence of the yurts has underlined for the City that the occupiers aren't about to pack up shop anytime soon. It's at least a little surprising that this comes as a revelation on the 24th day of the movement, but perhaps the initial plan had been to take a wait and see approach.

"City parks cannot be used as a place to live," the note forcefully states. "This contravenes bylaws that prohibit camping in our parks." Until Ford reveals his plan for Occupy Toronto â something he promised when he returned from the Pan Am Games last week â it remains to be seen what will come of these observations, but there's certainly the possibility that his patience is wearing thin.