Thousands of zombies eventually left the park in a hauntingly slow crawl east along Queen St. to Spadina, up through Chinatown and then west along Dundas back to the park.

2011 marks the ninth year of the Toronto Zombie Walk. While last year's zombie walk went up through Kensington Market towards the Bloor Cinema, this year's marched past The Toronto Underground Cinema, where a double-bill of zombie flicks screened, as part of the Toronto After Dark Film Festival.

Here's some photos of zombies from this year's Toronto Zombie Walk: 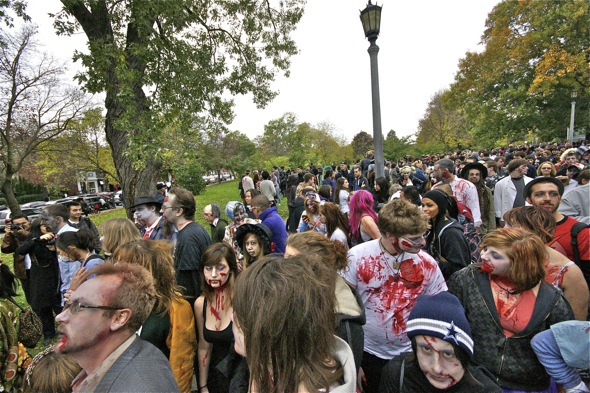 I got to the park shortly after 3 p.m. and there were still hordes of zombies mulling about. I missed the zombie wedding (more to come on that), but there were still plenty of young zombies marauding the area. 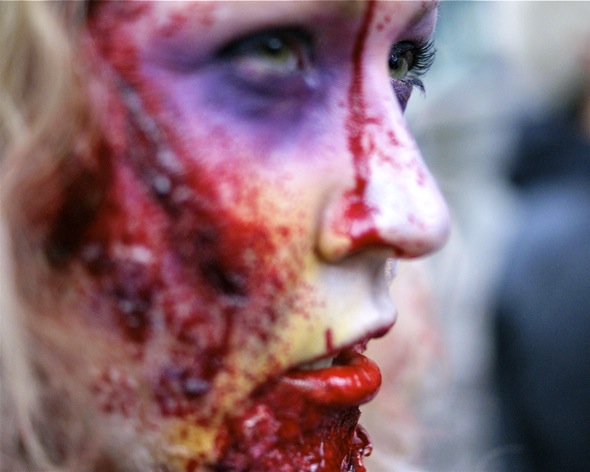 As usual, I was one of many, many photographers at the gathering. 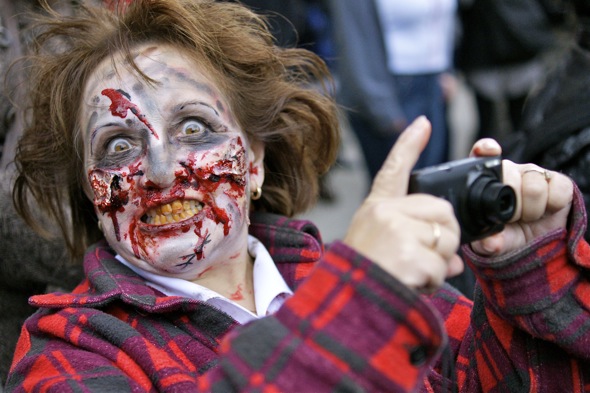 This year I saw a lot more photogs dressed for the occasion. 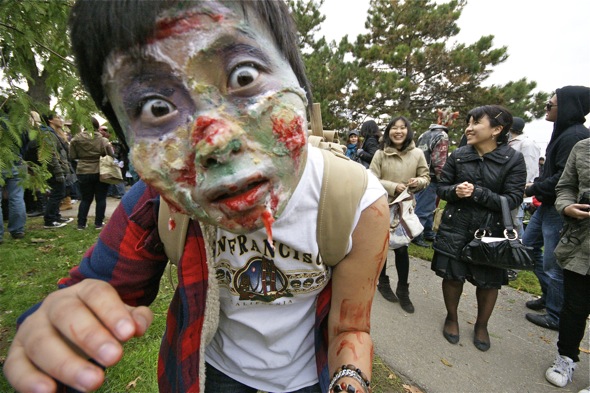 There were times I began to fear for my life. Or at least the safety of my camera. 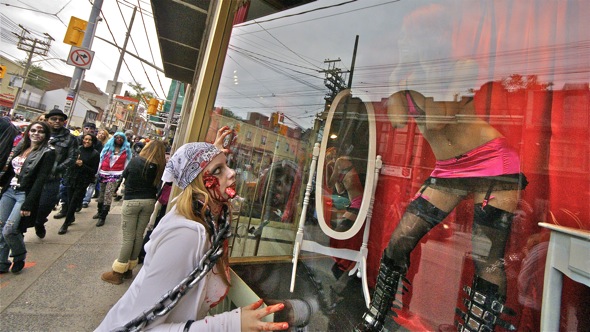 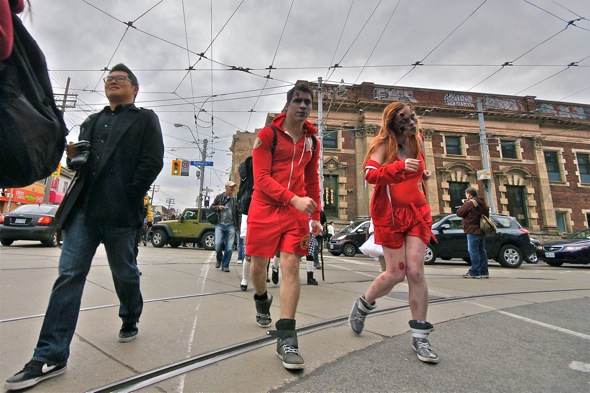 Crossing Bathurst was easy for these two Baywatch lifeguard zombies. 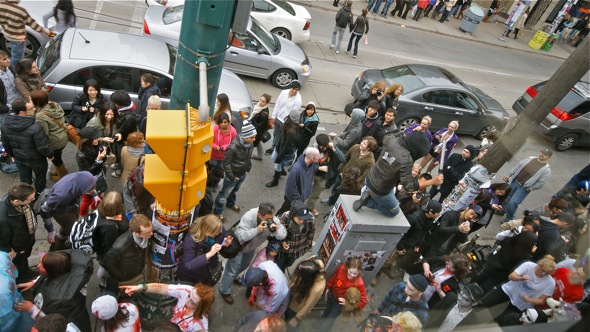 Navigating the corner of Queen and Spadina proved a little trickier, with lots of gawking passersby. 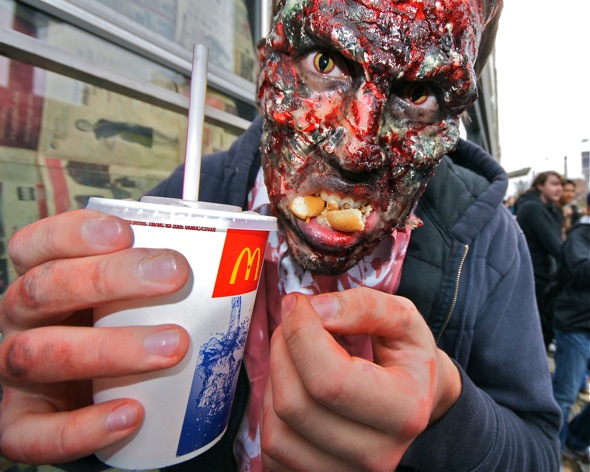 Many zombies got their fill at the McDonalds. McBrains, anyone? 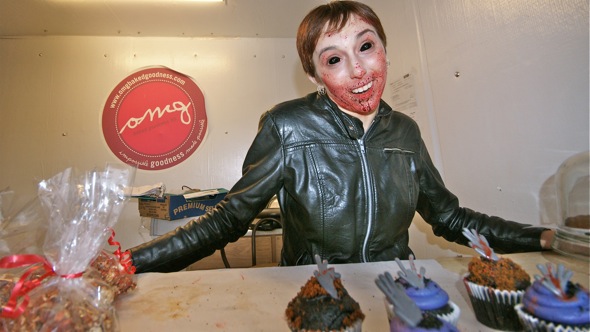 Further along the route, the OMG mini-store on Dundas was all decked out with brain food, served up by a cute black-eyed pixie zombie. 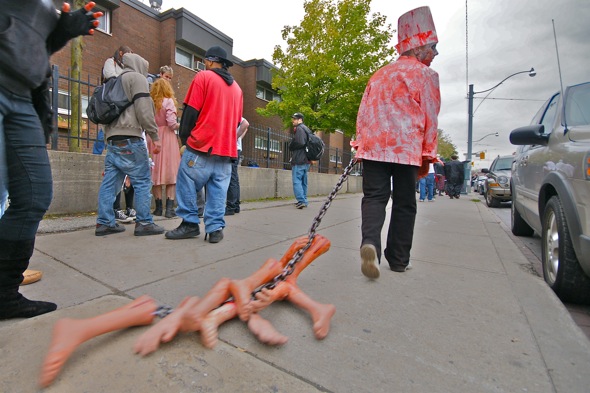 The stroll along Dundas took its toll on the limbs. 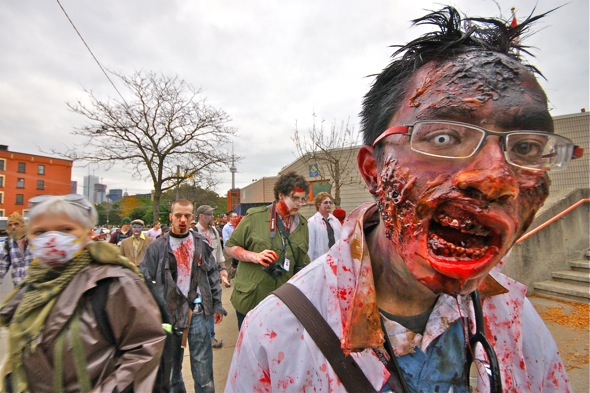 Anyone else run into this zombie? He totally freaked me out! 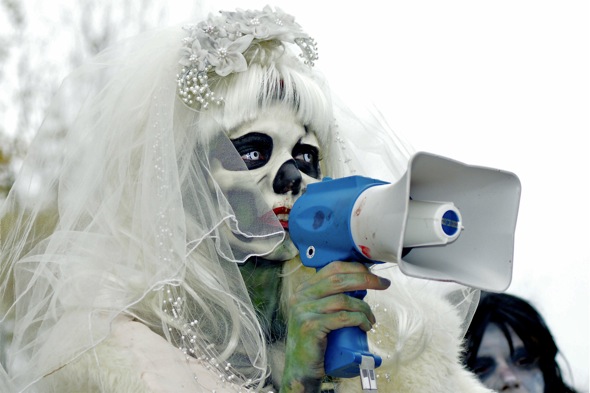 Back at the park, the blue-eyed bride rallied the troops for some prize give-aways and wedding cake.

This year's zombie walk was just the thing for anyone with a zombie fetish. For the rest of us, it gave us some good costume ideas for Halloween. What was your favourite zombie?

More photos in this slideshow:

Check out more photos on the blogTO Facebook page