They came by the thousands to Trinity Bellwoods park on Saturday — zombies of all shapes, sizes, ages, and freshness, intent on lumbering through the streets of Toronto in search of fresh brains on the ninth annual Toronto Zombie Walk. What they may not all have realized was that they would also be helping to celebrate the wedding of zombie queen Thea Munster to the love of her life Adam Invader. 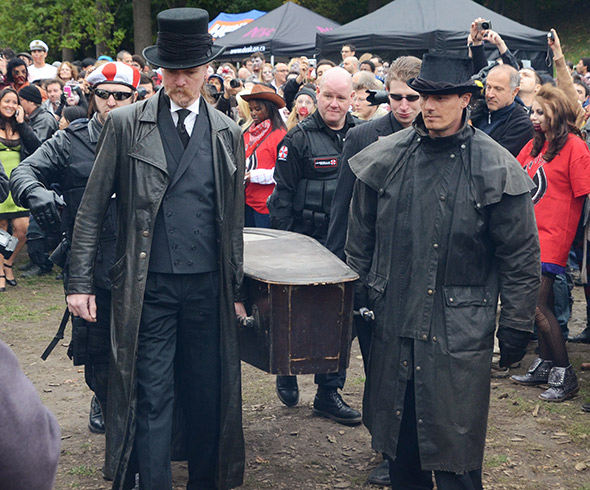 Likely the biggest outdoor wedding in Toronto this year took place before the walk began to loud moans and roars of approval from the zombie hordes. Appropriately somber organ music played while we waited for the rotting bride to arrive. When it stopped an expectant hush fell over the crowd as pallbearers — because what's a wedding without pallbearers? — made their way through the throngs and deposited a coffin on the stage and removed the lid. One arm dramatically rose forth clutching the bridal bouquet (festooned with skulls and funereal flowers). 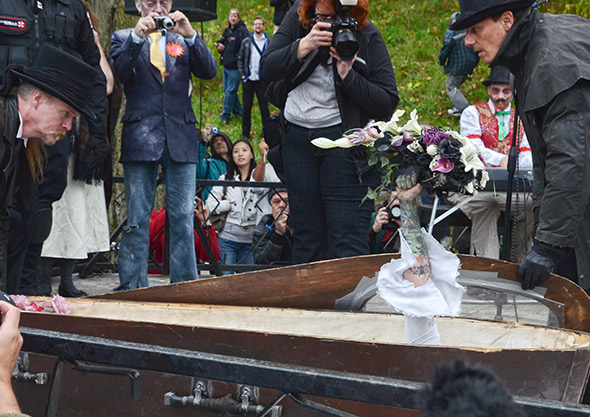 Suddenly she arose, resplendent in white gown and lace headdress as she moved across the stage and took her spot before the altar adorned with a red-eyed skull keeping watch. As an army of photographers snapped away, the couple exchanged their somewhat unorthodox but heartfelt vows, exchanged rings (held by the best man on a tray holding severed fingers of course), and after being declared legally wed, shared a decidedly non-traditional kiss. 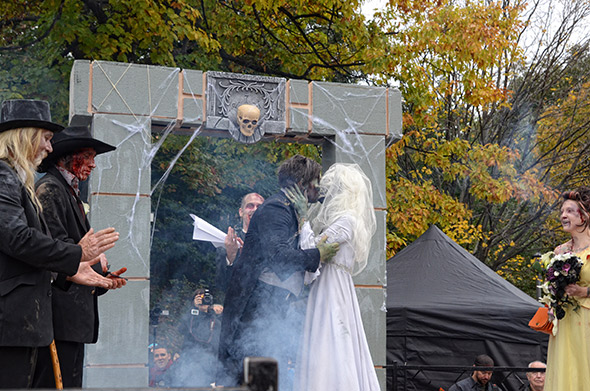 Nobody seemed particularly worried that the bride was perhaps a little too enthusiastic when she tore away a part of the grooms face with her teeth; these kinds of problems are all in a day's work for the "life impaired," and I'm sure they'll work things out. They triumphantly held aloft their marriage license for the crowd, which roared and moaned their enthusiastic approval. After the bouquet and garter belt throw into the audience (in which the new groom perhaps got revenge for the kiss judging by the portion of leg still attached to the garter when it flew into the crowd the newly-deads thanked their gruesome gusts and the shambling began. 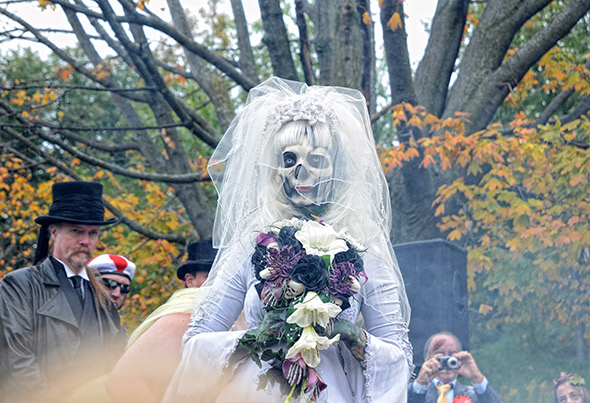 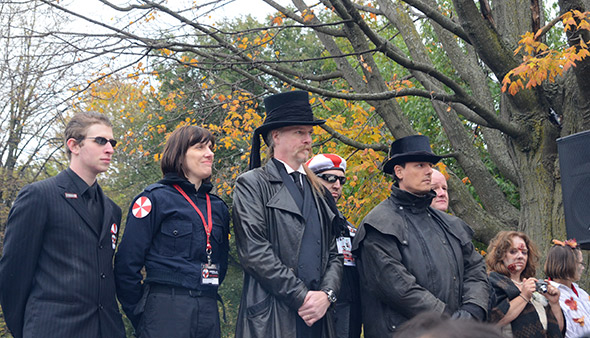 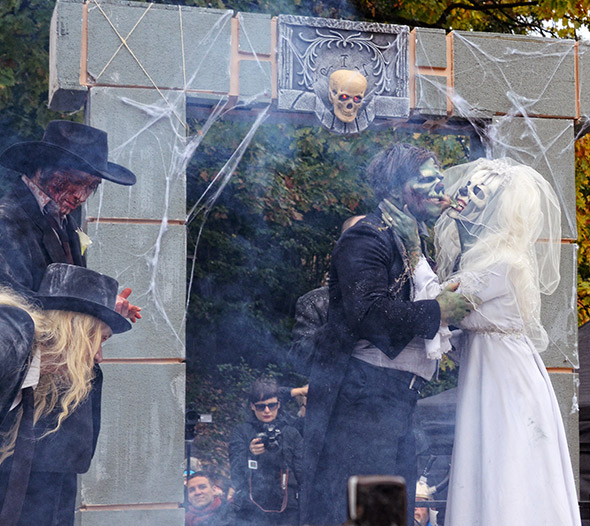 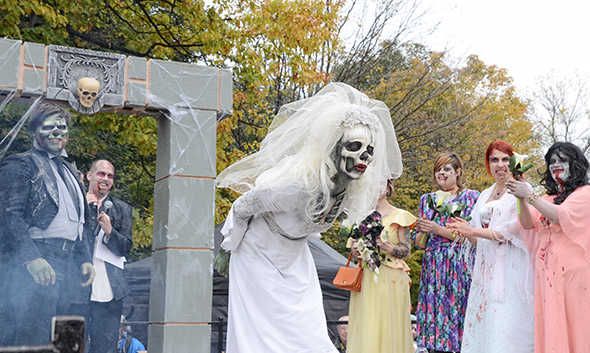 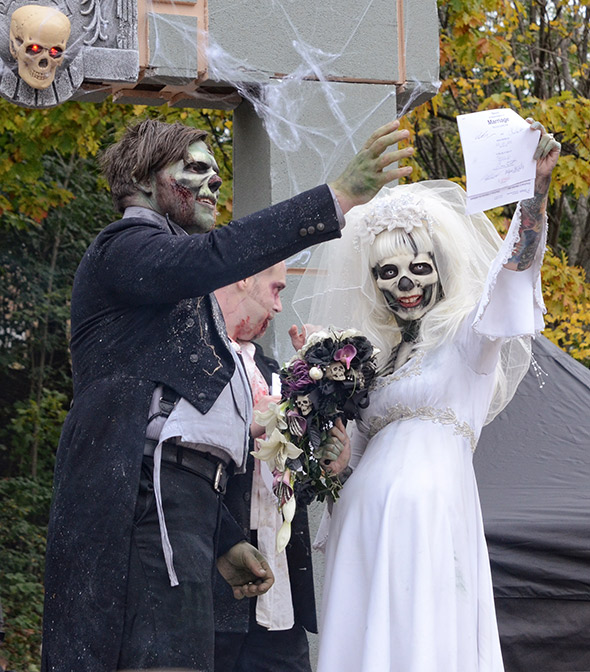 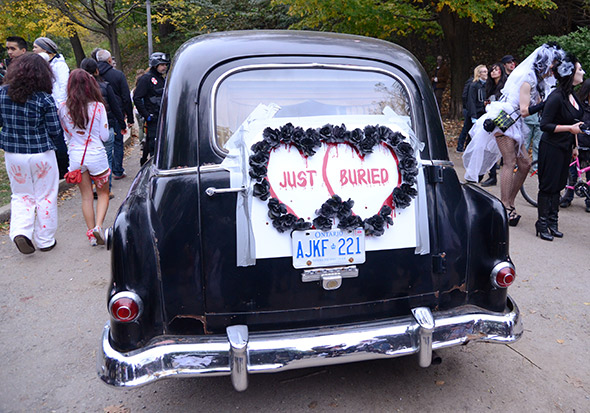 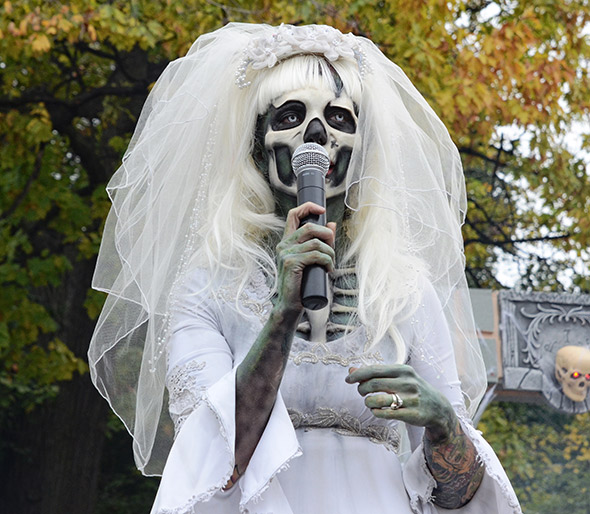