Toronto Laneway Tours are a fantastic way to experience a part of the city that's often assigned merely utilitarian status.

Behind the rows of buildings along the south side of Queen West around Bathurst, for instance, is the now famous stretch of city known as Graffiti Alley. It's an ever-evolving outdoor art gallery with no admission price and no curator. Instead, under the cloak of night, some of the city's most talented painters come to display their work. Spray painted on the back of one of the city's most famous streets, are works of fantasy, social commentary and abstract imagination — colourful murals covering nearly every inch of space. 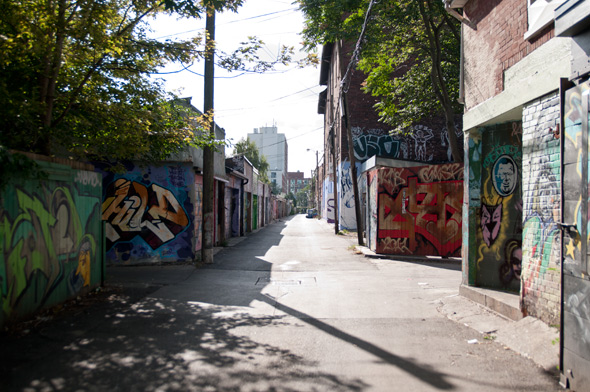 It's just around the corner from here, outside the Pizza Pizza, that people begin to congregate around 12:45p.m. on a warm Saturday afternoon. When I arrive there are already close to 10 people, with more arriving in a steady flow. By the time our guide shows up we hit a critical mass of close to 50 people. Enough that the "meet outside the Pizza Pizza" instructions have become increasingly inconvenient for people trying to get by.

We're all here for the Laneway Tour, one of a number of seasonal back-alley tours Graeme Parry conducts — for free — between the beginning of June and the end of September. Parry doesn't immediately strike you as someone who would spend much time strolling through alley-ways. The only indication of this hobby of his is the logo on his t-shirt: a street sign containing a pedestrian with a green circle around him. Below, the words: "in this lane." 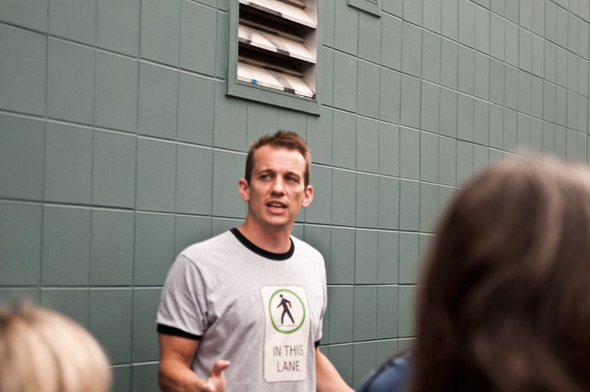 Parry has been leading these tours for nine years now. When asked why he does it, he replies simply that if he were visiting another city, this is exactly the kind of tour he would want to go on.

Once a few stragglers arrive we begin by walking south, to the mouth of the laneway. The format is pretty casual; as we walk, every now and then Parry stops to give us some context on what we're looking at. Sometimes pointing out a street artist who is particularly prolific, or a new piece that just went up, or any number of pieces depicting graffiti's subject de rigueur — Rob Ford. 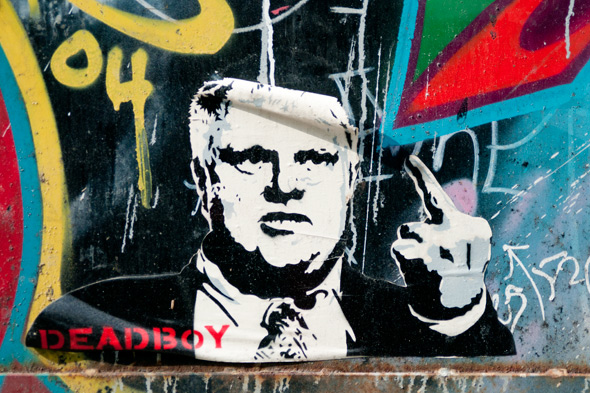 And while the art is lovely, it's the laneways themselves that are the real focus of the tour. They're like this alternate universe that runs parallel to the city we're familiar with — urban wormholes you disappear into only to reemerge somewhere else a kilometre away.

When we finally turn north and reconnect with Queen Street near Claremont, for a brief moment I feel totally lost. Accessing Queen at that point, from that angle is so foreign that the street isn't even immediately recognizable. 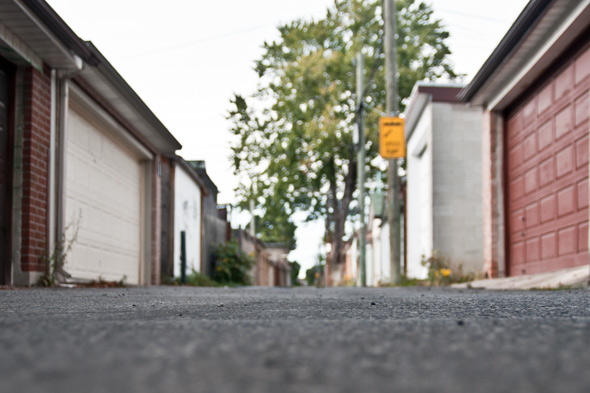 We then cross and begin heading north on St. Mathias Place, one of the few laneways to have reached such a grand level of respect that it gets a name, and it's here at the mouth of Mathias that it becomes apparent why.

Just north we encounter our first laneway house, a small cottage covered in ivy and for a moment, it doesn't feel like a laneway at all. It doesn't even feel like Toronto. The fence across the street is hidden by a garden full of wild flowers, the street is quiet and calm, it almost feels like the countryside. 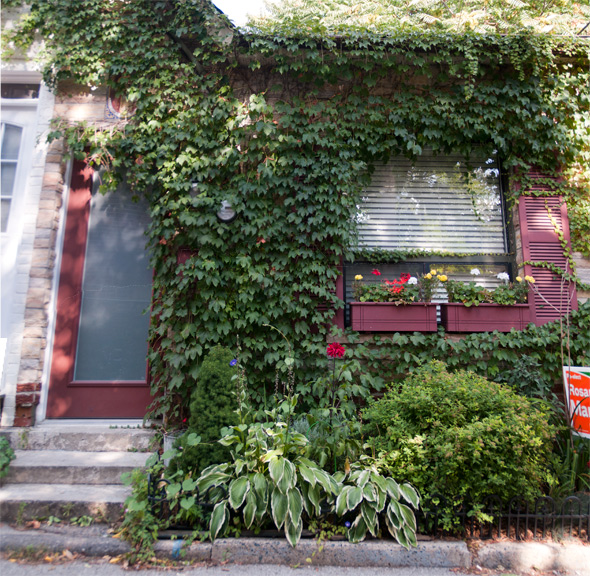 The stretch further north along St. Mathias is more sparsely decorated; the residential garage doors are left mostly bare with the occasional tag or profane exclamation. It's this area that actually reminds you what a blessing street art can be. This part of St Mathias actually feels much less inviting than the arteries behind Queen Street. With just barren white and brown garage doors, speckled with the odd bit of profanity, this laneway feels like the kind of place no one would want to go. 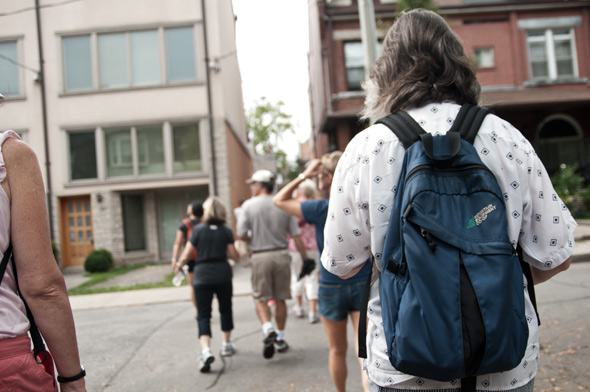 Perhaps the most interesting part of the tour though, happens once we hit Ossington. Here the Laneway houses take a much more contemporary approach to design and the graffiti becomes accomplished and interesting again. Some pieces would even look completely natural hanging in a gallery with exorbitant price tags tacked on. 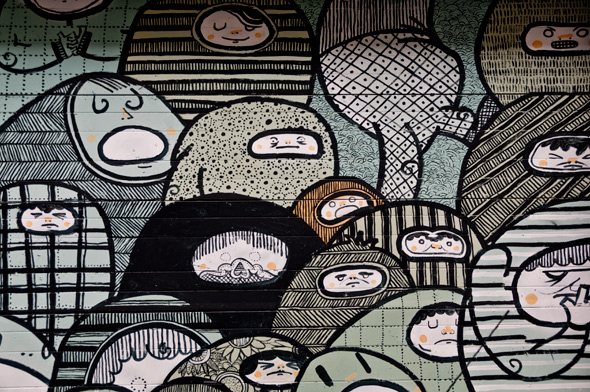 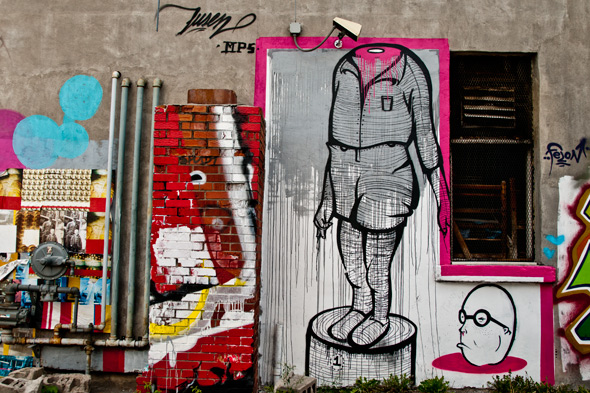 Finally, there's Skey Lane, another legitimized laneway gifted with a name. With it's "Watch for Children" sign and multi-story town homes, we see what a laneway can be. The street opens up to something that almost resembles a neighbourhood square, something vaguely European in concept, but completely North American in execution. 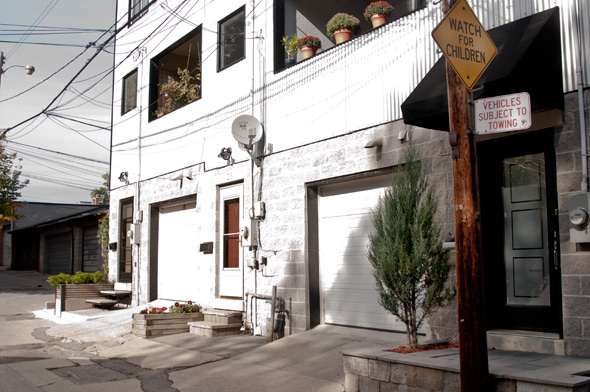 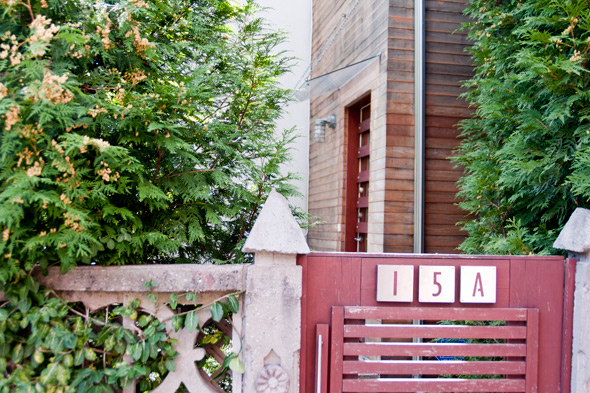 The whole things lasts about an hour, and to be honest, is a pretty wonderful way to spend a part of one's afternoon. Graeme's site has maps for all his tours, so people can explore these predominantly undiscovered alcoves even in the off season.

For me, the biggest facepalm moment came when I realized how much time I could have saved in my life and how much safer I would be, if I stopped riding my bicycle on busy roads, fighting with cars and pedestrians for precious space, and took to the laneways instead. It takes a big of brain re-jigging to get your bearings, but once you do, it's way worth it.

Note: This article replaces a previous, much shorter effort originally published in 2005. Some comments below refer to the past version.