Get to know a street: Sterling Road

Sterling Road is one for the creative types. It looks quite basic from the outside, offering rows of boxy brown lofts, but through the doors you'll find a circus (quite literally) of axe-throwers, improvisational musicians, paintballers, tumblers, and more. That'll teach you not to judge a book. With the old Tower Automotive building, the reputation for hosting the odd underground rave, and piles of gravel that never seem to disappear, this spot certainly has a lot of character, and a lot more hidden behind its walls.

Here are some places to check out on Sterling Road.

Cirque-ability
Cirque-ability is one of the Sterling Road places that really makes use of its incredible loft ceiling, with hoops, silks, and other aerial apparatus hanging from the ceiling just waiting to be climbed. Cirque-ability offers circus-inspired classes for kids and adults, teaching acrobatics, performance techniques, and aerial stunts in classes no larger than six to a coach. It also hosts breakdance parties because apparently the 90s aren't over yet. 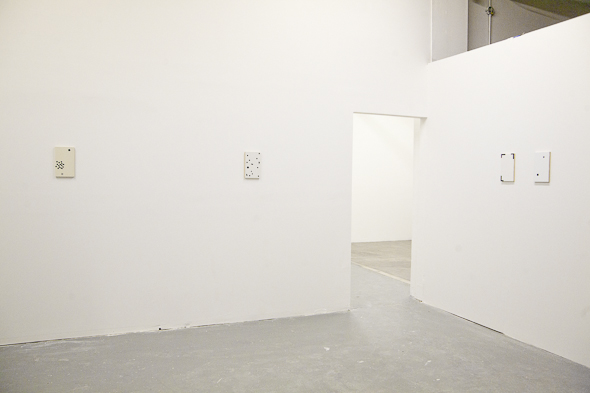 Tomorrow/Yesterday
A gallery space and printing house in one, Tomorrow/Yesterday may elicit thoughts of Beatles' tunes in name but is much less colourful in existence. With stark white walls and great loft ceilings characteristic of these spaces on Sterling Road, Tomorrow/Yesterday exhibits contemporary international art with Sebastian Black's (quite literal) Period Pieces currently on display. 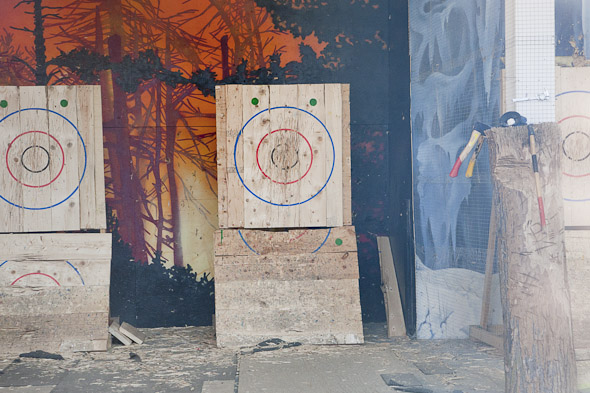 Toronto Backyard Axe Throwing League
Yes, this exists, and yes, it is mildly terrifying. What started as a cottage bender in Turkey Point has evolved to a fully functioning league, where players chuck hatchets at mounted wooden targets. Indoors. Axes are thrown from a distance of 15 feet and awarded points based on where they hit the target. League nights are Monday to Wednesday and toddlers need not apply. 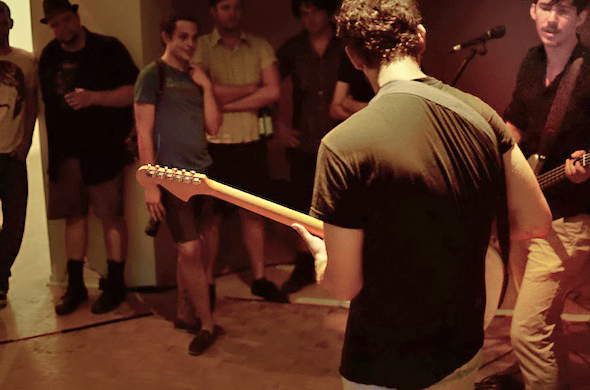 Forgetus Collective
Forgetus Collective is a new Sterling creative space that hopes to offer a little bit of everything; concerts, parties, lectures, exhibitions and more. While the floors might be akin to those in my last awful apartment, Forgetus Collective keeps its walls fresh and interesting, and just hosted Best of Show, an art exhibit by locals Brian Rideout and Brad Tinmouth. 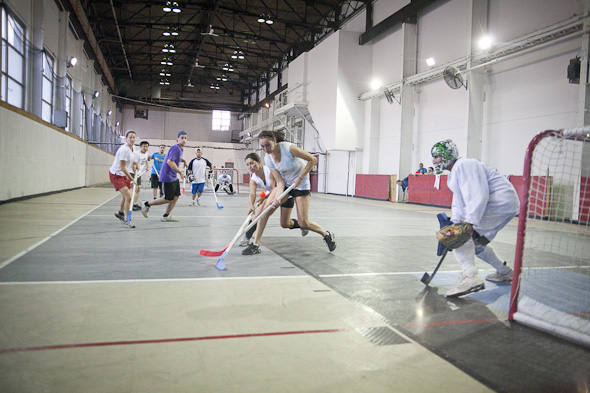 Just 4 Fun Sporting Club
A more positive take on the "Have Your Ass Handed 2 You Sporting Club." Just 4 Fun Sporting Club is a multi-purpose facility available for parties, team building, tournaments, leagues and more. You can drop in for a game of ball hockey or basketball, or sign up with a league and play in a (just 4 fun) tournament. The space also hosts volleyball, dodge ball, and indoor soccer. 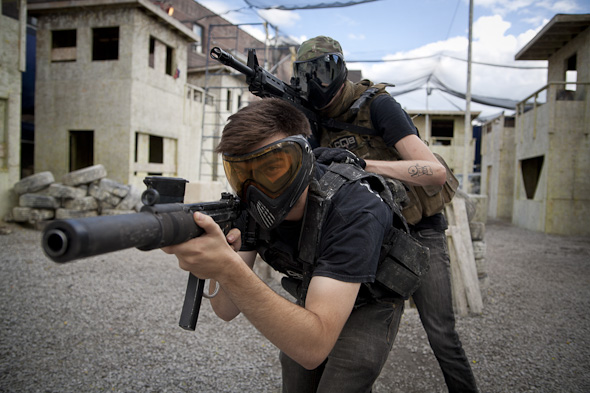 CQB Tactical Paintball & Training Academy
CQB Tactical Paintball isn't your run-of-the-mill paintball facility. Whereas most are just fun and games, this place was specifically designed to provide a training ground for those looking to pursue careers in law enforcement, the military, or security. The outdoor "training facility" provides everything you'd encounter on a real security raid, including a stack of tires, miscellaneous barrels, housing frames, and, uh, paintballs. 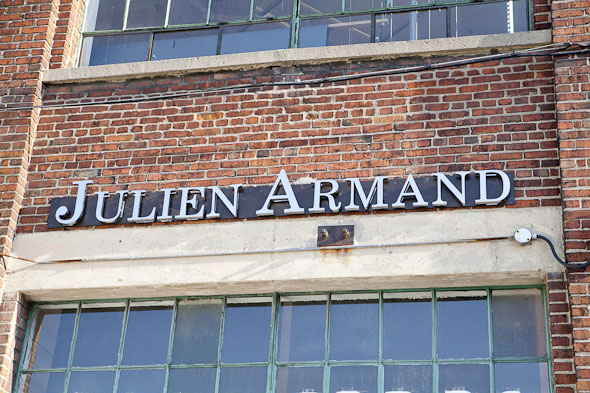 Julien Armand
Julien Armand is not some sort of agility wonderland like many of the other spots on Sterling Road, though you might think so looking at its south wall of chairs mounted floor-to-ceiling and every which way. Furniture, obviously, is the offering here, with sleek fiberglass molded chairs, modern and angular leather couches, and contemporary glass tables in a variety of shapes and sizes. 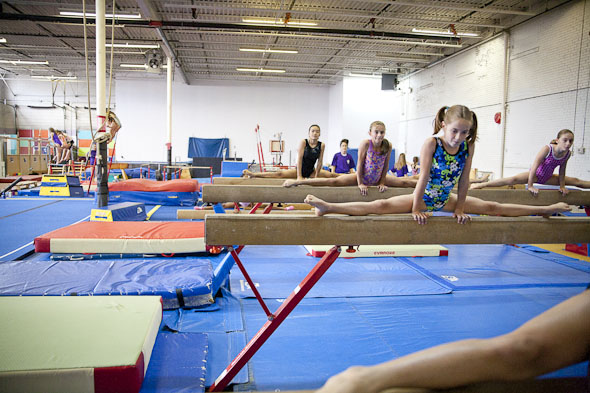 T-Dot Tumblers
T-Dot Tumblers is an 8,000 square-foot gymnastics academy where students do absolutely amazing things with their bodies over a feeble sea of thin blue mats. It hurts just to look. T-Dot Tumblers runs recreational programs for kids as young as six months (is sitting without support considered gymnastics?) and competitive programs for girls. The space also hosts birthday parties and camps. 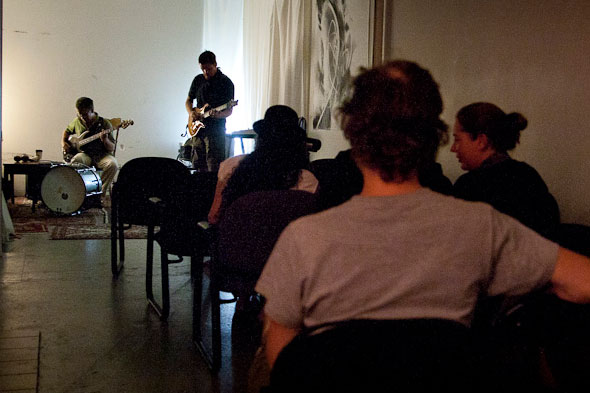 Somewhere There
Somewhere There is another Sterling Road creative space, but here the focus is on musicians, many of whom from the Association of Improvising Musicians Toronto. Previously in Parkdale, this space hosts a different performance nearly every night at a reliable $8/show. Some musicians join a two-month residency program whereby they perform at Somewhere There once a week on either Wednesdays, Thursdays, or Sundays. 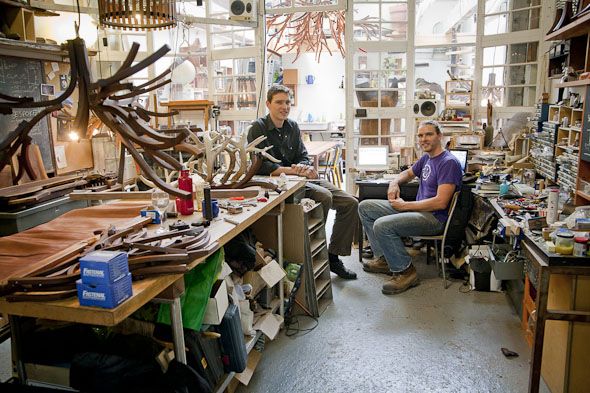 Brothers Dressler
You can't really come here to shop, but I suppose you could come by just to gawk. Sterling Road is where Brothers Dressler create their one-of-a-kind furniture pieces, many of which you'll find at local Toronto hotspots. (One of my favourites is the massive log bench at the new SOMA location on King West.) The woodworker twins use this space as their studio, and it all pretty much reeks of some sort of fairytale.