GPS-based next vehicle tracking of TTC buses has gone live on the NextBus website, and it looks like formerly streetcar-only arrival apps will incorporate such information within about a week or so. According to Adam Schwabe, creator of Rocket Radar, his team has already has a beta version of the app ready for bus-related info, but needs to confirm that the Open Data feed hasn't changed around structurally with this new addition.

TTC spokesperson Brad Ross confirmed via email that the system is still in beta, and won't see official implementation until June. As such, it's impossible to give any evaluations of the feed's accuracy at this time, though you can bet we'll be testing it out right away. This, after all, is exciting news for bus commuters who've had to wait for over a year since live vehicle tracking was implemented on streetcars.

We'll provide an update once we know more from local app developers and the TTC itself.

Sorry folks, the availability of this beta feed is going to be short-lived. According to Ross, "this feed was opened up by Grey Island inadvertently. While it's live right now, it won't be for much longer. When the TTC is ready, in June, it will be open and permanent."

No major complaints, here. It's probably better to test beta in the dark so as to avoid over reliance on a system that's not ready yet.

If you're not into using the NextBus mobile site, nextstreetcar.ca (which will have to be renamed) displays the bus info in a clean and easy to use manner. Also an option the TTC's SMS-based next vehicle predictor (though you'll need your stop ID). And if you're curious about how many buses are out there at a given time, you can manually enter bus routes into the URL at Where's My Streetcar (another site that's going to need a rebrand). It's actually really fascinating to get a glimpse at how many buses are on a given route at a particular time.

Here's a look at a few routes via screencaps: 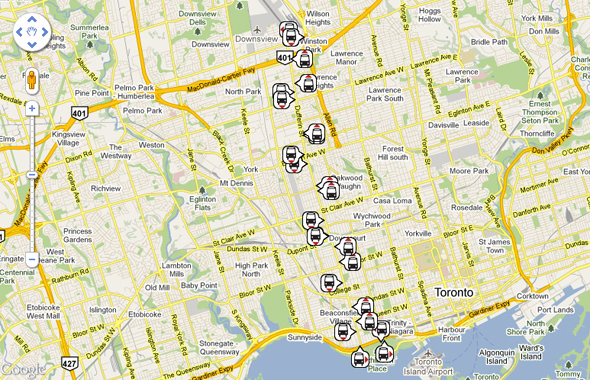 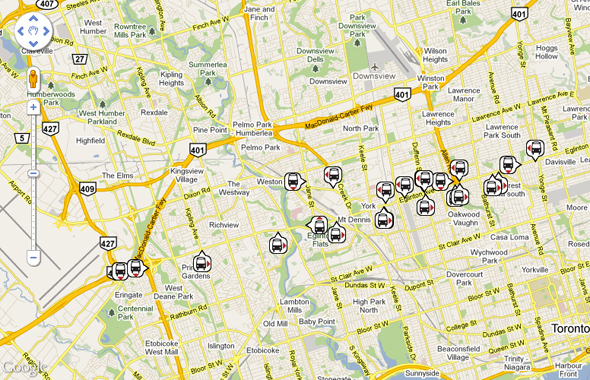 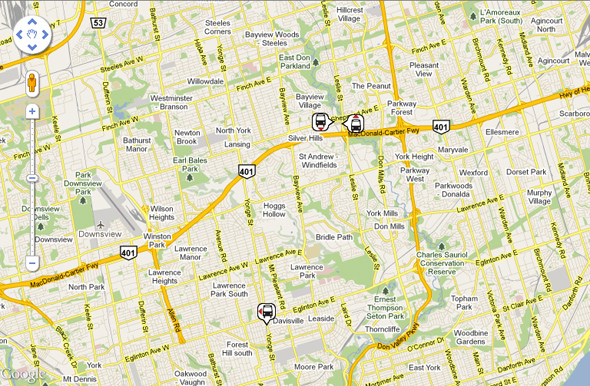