SlutWalk Toronto takes its message to the street

The Toronto SlutWalk featured over 1000 sign-wielding women, children and men who stomped, yelled, cheered, and hollered as they marched from Queen's Park to Police Headquarters with the strong message that "we've had enough."

"It's not about sex, it's about ethics" read one poster. "Believe it or not, my short skirt has NOTHING to do with you" screamed another.

The SlutWalk was founded shortly after an incident at York University where a Toronto Police officer stated that "women should avoid dressing like sluts in order to not be victimized" during a campus safety information session. 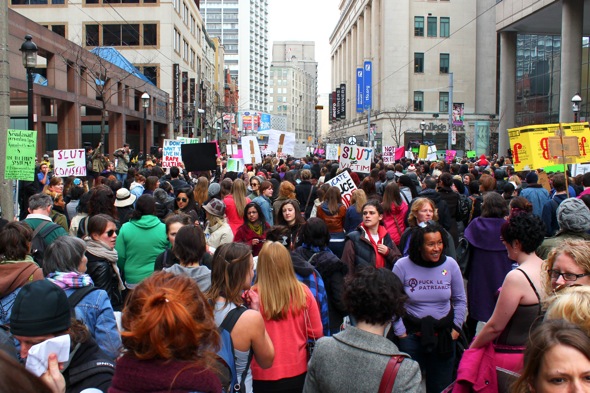 "We are here to remind the police, and all those who believe this, that we are NOT responsible for sexual violence," Toronto Rape and Crisis Center representative Deb Singh told the crowd gathered outside of Police Headquarters, "We are WOMEN; and if we could prevent rape we would."

Melissa (who declined to give her last name) told me the idea that women "ask for it" by dressing a certain way is disgusting.

"If I want to wear a short skirt, or a low cut top, that does NOT mean I want you to touch me. I should be able to dress how I want without worrying about my safety, or about how people view me," she said, before loudly adding, "This is 2011, not 1950!"

Sarah Hamilton travelled here from Guelph to attend the rally after hearing about it from a friend who works for a a sexual assault crisis centre. "I have friends and family who have been through these things, and I came to show my support. I'm a huge supporter of women's rights, and of reclaiming our place in a society that sometimes is not very nice to us." 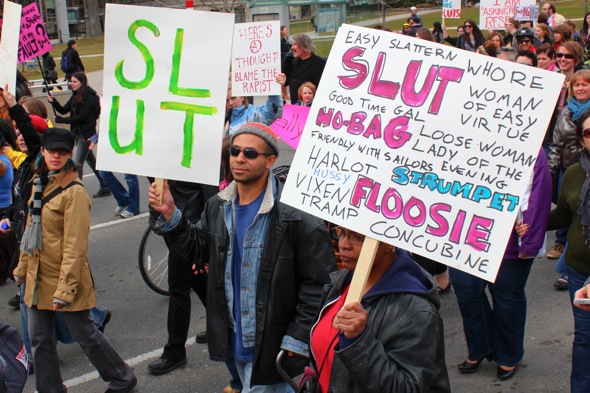 After the rally, I caught up with co-organizer Heather Jarvis who said she's absolutely "overjoyed" at the strong turnout.

There was, however, one organization glaringly absent from the rally: an official police presence. "It's very disappointing they aren't here," said Jarvis, "We didn't just want to stand here and say 'do better, do better, do better'... this was an opportunity for them to address some of the criticism, and they choose not to be here. To me, that's a message. How can we not take it as a message?" 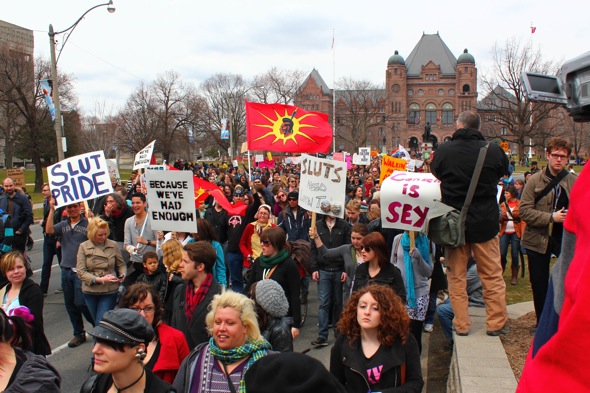 Jarvis hopes the success of the rally - both in Toronto, and globally (satellite SlutWalks are planned for Ottawa, Vancouver, Yellowknife, Dallas, and Boston, to name a few) - will make Police Services sit up take notice.

Already, SlutWalk has been a huge success - and not just in numbers. "One of the biggest things for me is that people aren't shutting up anymore," says Jarvis, "People are challenging each other about their ideas, and calling people out when they blame, and they shame, and they victimize. Change is made when you say something, and people are saying something." 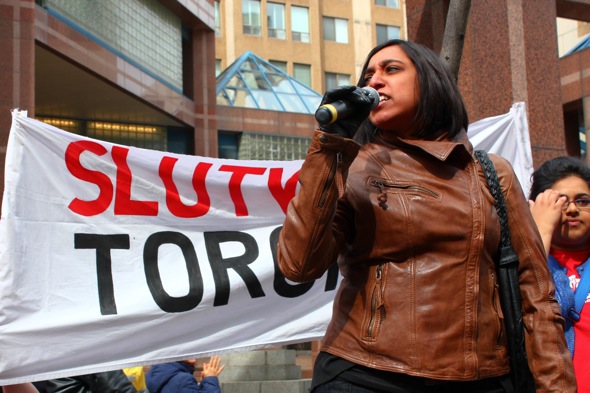 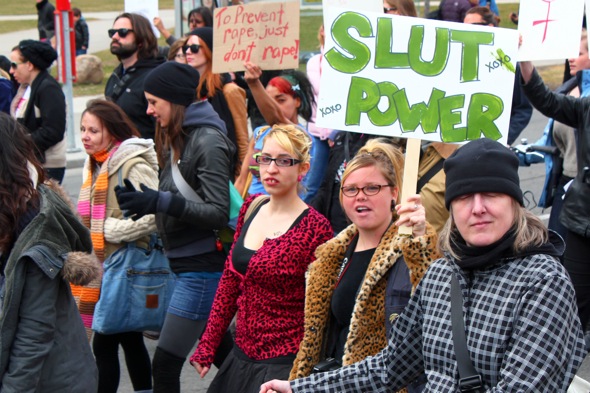