Big changes on the way for Liberty Village (eventually)

On Tuesday night Liberty Village residents and other interested parties got a glimpse at some pretty significant changes that could be in store for the neighbourhood in the coming years. The second of two open houses devoted to Environmental Assessments in the area (the first was back in June), highlights included proposals to build a pedestrian/cyclist tunnel across the Lake Shore rail corridor, the construction of new Dufferin bridges over the Gardiner and rail lines, and the creation of a new street at the south end of the neighbourhood.

Of the three projects, I suspect the first two are the most interesting from the perspective of the casual observer given that the Dufferin bridges are in need of replacement mostly on account of their age, and the overall landscape won't change much when they're replaced (although the Dufferin Gates might be slightly repositioned). 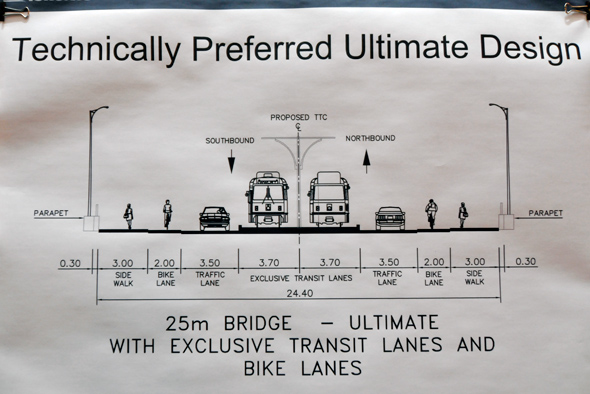 Having never attended one of these open houses before, I was curious to find out what they're all about. My first impression, however, was that the whole thing was a little overwhelming. With no less than 50 informational boards spread in an Ikea-like maze throughout Liberty Noodle, getting a handle on just what was being proposed required a bit of patience. Or assistance. Despite the saturation of info, I'd estimate that the ratio between planning staff and residents was about one to one over the duration of my visit.

I was eventually (and thankfully) drawn into a conversation with Stephen Schijns, a City of Toronto Manager of Infrastructure Planning who guided me through the three proposals. Our discussion centred on the degree to which the pedestrian/cyclist link and new street were both representative of a need to address the insularity of Liberty Village in some way. These projects aim to "retrofit the area so that it connects with the rest of the city," he told me. 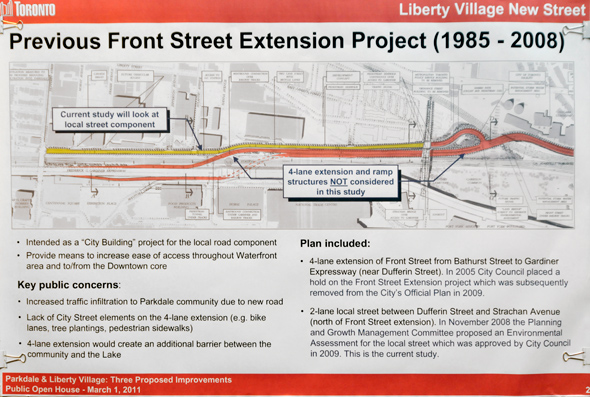 The idea for a new street at the southern tip of the neighbourhood actually goes all the way back to the proposal for a Front Street extension, which was first tabled in the mid 1980s. Eventually that plan fizzled, but its legacy (thanks in part to the Liberty Village BIA) might be a local thoroughfare that reduces congestion in an area that currently features limited access points. Although the specifics have been yet to be worked out — i.e. the number of lanes, cycling infrastructure, location of traffic lights, etc. — the overall plan would see it run alongside the railway tracks from Strachan in the east to Dufferin in the west.

A pedestrian/cyclist connection on the north end of the neighbourhood would also go a long way toward making the area more accessible. Quite a bit further along in the planning process, the idea of a tunnel was initially rejected on account of complications associated with private land ownership, but First Capital Realty Inc. has expressed an interest in seeing such a project built on their land (near 1071 King West on the north side of the tracks and the Metro grocery store on the south), which has led to its so-called resurrection. The tunnel is preferred over the construction of a bridge, Shijns tells me, mostly "on account of cost and the fact that it'd be less visibly intrusive." 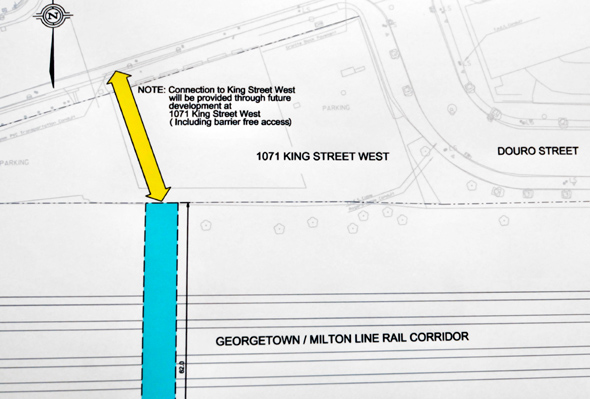 When asked how much weight public input is given in decision-making on projects like this, Shijns is diplomatic. "Planning isn't a popularity contest" he says, but "we do listen to the concerns of the community." Of the residents that I spoke to, most were enthused with the plans, but disappointed at the how long it'll be before construction might begin. Although the pedestrian/cyclist tunnel and the Dufferin bridge(s) replacement proposals will go to a Public Works committee May 26th, the former project isn't expected to be complete until 2014.

That's a long time to wait, especially considering that these projects have a tendency to drag on, but at least these proposals make sense for the neighbourhood. Not only that, with the swath of condos going up on Sudbury Street to the north, a pedestrian connection to and from Liberty Village will open up the neighbourhood to residents who might not be so inclined to make a visit these days. And that, from an outsider's perspective, is exactly what it strikes me Liberty Village could use most — at little less insularity.

More detailed reports on the above projects are expected to be uploaded to the City of Toronto website in the coming days.