Why the graffiti at the Brick Works should stay

In today's Globe and Mail John Lorinc reports that as a result of a complaint received by the mayor's office regarding graffiti at the Don Valley Brick Works, Evergreen, the company that runs the site, received a summons that cites 13 violations of the municipal code. The not-for-profit agency was thus instructed to remove the graffiti or face the possibility of fines and/or legal action. Not surprisingly the news has reignited the longstanding debate over whether graffiti is art or just petty vandalism. In addition to comments on the article (65 at last check), the CBC's Rick Mercer, who films a segment of his show in and around Toronto's so-called graffiti alley, offered the following observation: "I can assure you that there are artists who paint in the alley where I do my rant who will be remembered long after Rob Ford is gone."

I've dipped my toes in the water of the "is graffiti art?" debate before, but I think in this instance, such discussion misses the more crucial issue at stake. Regardless of what one thinks of "street art" (or if indeed it should even be called that), perhaps it'd be more appropriate characterize the graffiti at the Brick Works as an "artifact" (or artifacts). The point of making such a distinction - between art and artifact - would be to set aside the issue of whether or not graffiti is intrinsically valuable. 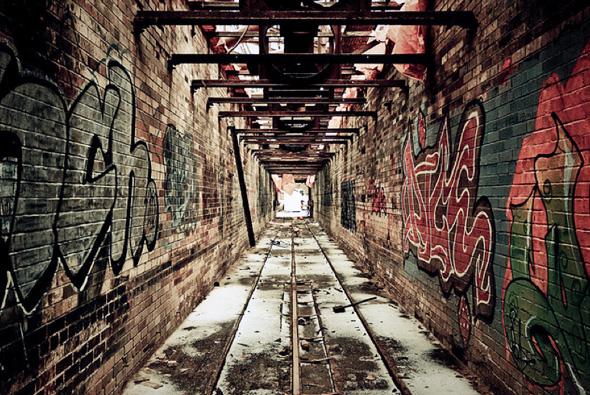 The graffiti in question, as Lorinc points out, is mostly from the 1980s and 1990s when the Brick Works was a haven for urban explorers and underage drinkers, not to mention the homeless. As such, it is an integral part of the site's history, the walls a palimpsest upon which the story of the buildings is written. So even if some or all of it isn't worthy of the title "art," it doesn't really matter. Not only would its removal damage the building, but it'd represent further sanitization of a place that's already lost at least some of its connection to the past via the recent redevelopment process.

Unfortunately, however, these issues won't form the basis of the discussion between Evergreen and the City. Back in 2005 David Miller's anti-graffiti bylaw put forward a stipulation that distinguishes between graffiti (which is illegal) and art murals (which are legal). If Evergreen were thus to argue that the work on the walls at the Brick Works was a mural, it might be able to get around having to remove it from the buildings. The problem is, it's not really accurate to characterize what's on these walls as murals. Sure, some pieces would fit that description, but really what we're talking about is graffiti, plain and simple.

And what's wrong with that? Some of the stuff has been there for over 30 years. Doesn't it make more sense from a cultural standpoint just to leave it be?

Photos by Seeing Is and Jen Tse in the blogTO Flickr pool.