A condo explosion is on the horizon for Yorkville

Even as the residential property market starts to hit a few snags, Yorkville has not seen a slowdown in construction. Though many people can't afford Toronto's current property prices, the rich certainly can. The revitalization of Bloor Street between Bedford and Church (along with the expansion and introduction of marquee stores like Hugo Boss and Hermes) has also helped keep the market buzzing in this area. But Yorkville's rapid expansion is also radically changing its character. No longer even a quaint village for the rich, it has become a neighbourhood of luxury towers and high-rises. Here's 10 more proposals that will keep pushing Yorkville (and the surrounding areas) upward. 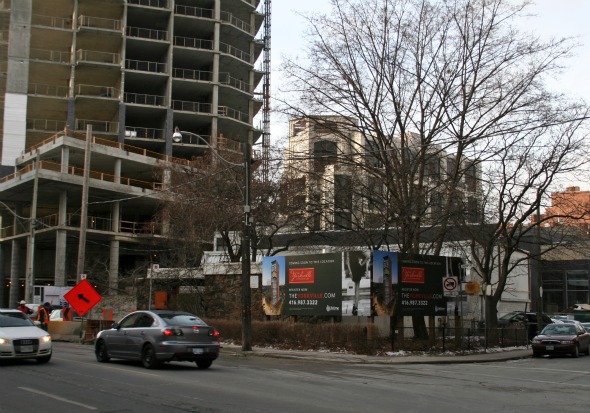 Taking the place of the Moriyama & Teshima architectural offices (these architects designed the nearby Toronto Reference Library) at Davenport and McMurrich, the Yorkville Condominiums will rise approximately 31 stories on this site. For those who are tired of the hegemony of the glass box, the design by Rudy Wallman does have some nice flair to it. While the loss of the M&T offices is sad, this dreary stretch of Davenport needs something different. This could be it. The building is currently in pre-sales, and no construction has been completed. 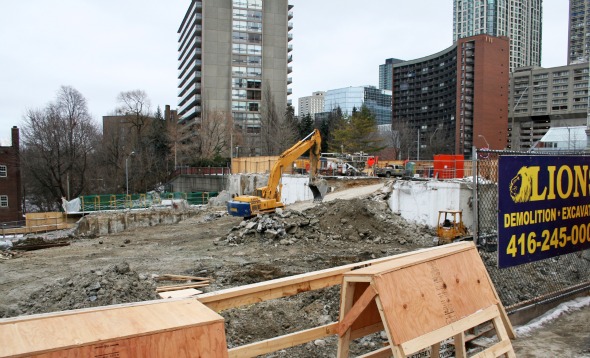 Continuing the Toronto tradition of giving unremarkable condos "exotic" and "romantic" names, Milan Condominiums will rise 37 stories from the corner of Church and Yonge. The site was formerly a Canadian Tire parking lot, so anything at this location is an improvement. Residents will get a lovely view of Rosedale, but they will also overhang the subway line: construction of the building was delayed for several months due to the difficulty in demolishing the previous parking structure. This one is also a slow burner. The proposal has been in official development since 2006. 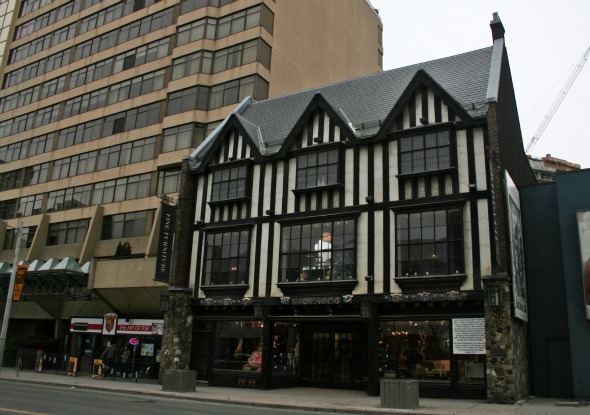 Planning applications are working their way through the planning department for the Ridpath's Fine Furniture store at 906 Yonge Street. Since this is in the early stages of its development, this is likely going to be a showcase for the new councillor in the area - Kristyn Wong-Tam - to distinguish herself from Kyle Rae. Some residents in the area felt he was too pro-development, and Wong-Tam has already indicated to the Greater Yorkville Residents Association that a residents group for this development is in the works. Ridpath's Fine Furniture, a high-end antiques shop, is housed in a Tudor Revival building that has been around since 1907. The development would put a thirty-five storey condo/hotel tower facing onto Yonge Street and a 28-storey tower on McMurrich. Portions of the current Ridpath building will be incorporated (read "facade") into the new development. 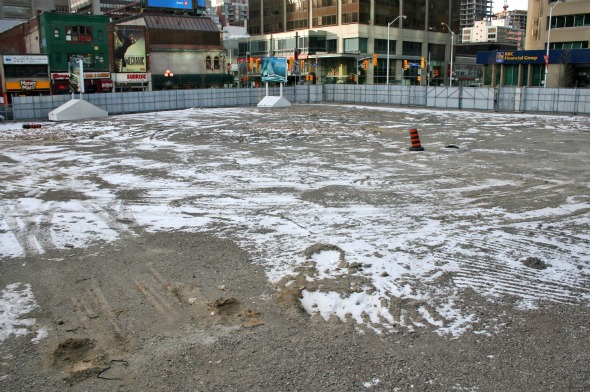 The site was originally going to hold the tallest residential building in the city, and nearly the tallest building overall: One Bloor East. Orchestrated by Bazis International, a Kazakh (!) development company, the building launched to line-ups and shoving matches. Plans for the building fell through when the credit crunch destroyed the development company's financing - but not before the buildings on this corner were demolished in 2008. Great Gulf has bought up the site, and plans are now in place to build a shorter (approximately 65 stories) Hariri-Pontarini designed tower. (Comparisons are being made between this tower and Chicago's Aqua.) Sales reportedly went briskly, but now the developers are "catching their breath" (according to their advertisements) before opening a new sales centre in 2011 and beginning construction. Fingers crossed that this very important corner does not remain vacant much longer. 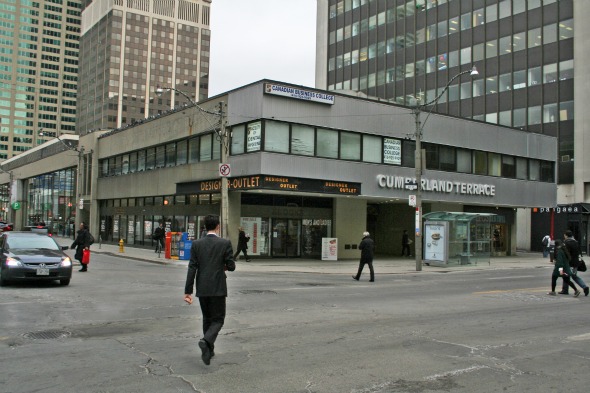 The Cumberland Terrace, home of such high-end stores as "Fragrance Bar", "Calendar Club" and - my favorite - "Fashion Concepts," is probably at the top of almost everyone's list of "let's tear this sucker down and replace it with something better." The proposal for this site does plan to tear it down, but the replacement will be very dense: a thirty-six storey tower and a forty-eight storey tower on a seven storey podium. The podium will be large because the Cumberland Terrace straddles the Bloor-Danforth subway, making sufficient below-ground parking impossible. The application was approved by city council, but the approval was - strangely - appealed by the developers to the OMB. It will be interesting to see what happens at the hearings in the new year, and what specific concessions the developers are looking for. 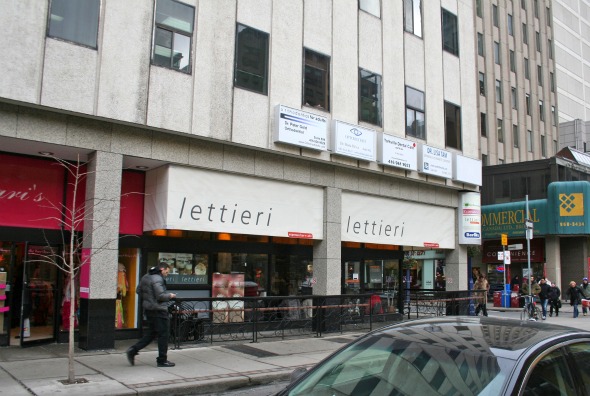 This proposal is also in the early stages. Minto - the developer of Minto Midtown at Yonge and Eglinton - wants to tear down the existing office building and replace it with a 26-storey tower. The city's official policy is that no residential buildings should displace commercial buildings, so this one is heading towards a big fight. 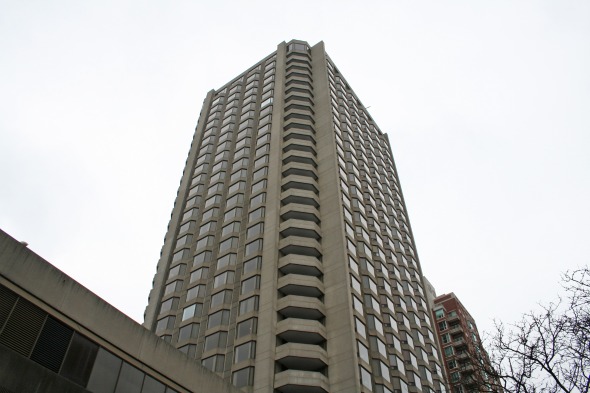 When the new Four Seasons Hotel and Residence is completed on Bay, it has been proposed that the old concrete building will be torn down and replaced with two new towers. One of the towers will reach approximately forty stories. This one has already caused a bit of tussle. When it was originally proposed, the towers were taller, and their height would have made them visible in the "postcard" shot of Queen's Park. Since then, a compromise between the city planning department and the developers has been worked out. However, the long timeline for this proposal - demolition cannot begin until approximately 2012 when the new Four Seasons hotel will be completed - combined with the sputtering property market have made this proposal less certain. There are even rumours that only one tower will be built. While many people would not be upset to see the current building go, some concrete heritage fans are hoping that this long-standing landmark of Yorkville won't have to go just yet. 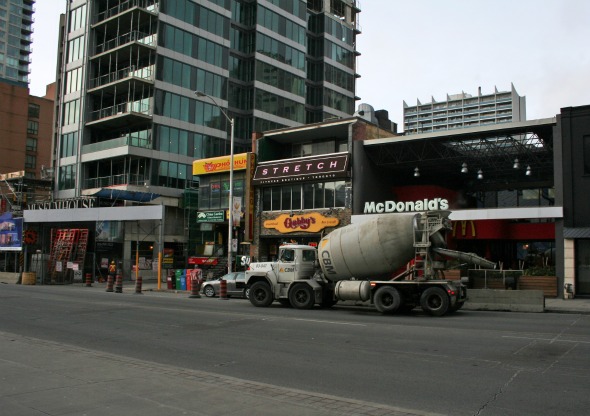 The stretch of Bloor between Bedford and Avenue has almost completely altered in the last ten years. All three of the sporting and cultural institutions on the south side of the street have been renovated: Varsity Stadium, the Royal Conservatory and the ROM. On the north side, two new condos have sprung up. Exhibit will make three. Originally proposed by the same Kazakh development company that proposed One Bloor East - Bazis - the building proposal stalled when Bazis ran into financing trouble. Now back with two new development partners, this proposal is steaming ahead with a revised, intriguing, 32-storey stacked box design. The proposal will clear out the last of the cheap food joints and slightly hokey bars on this strip: McDonald's, Gabby's, Pho Hung will all go (strangely, the nearby former Lobby bar is not part of the proposal). Although this rag-tag collection of buildings will not be missed, the cheap eats options in this increasingly expensive neighbourhood will be. 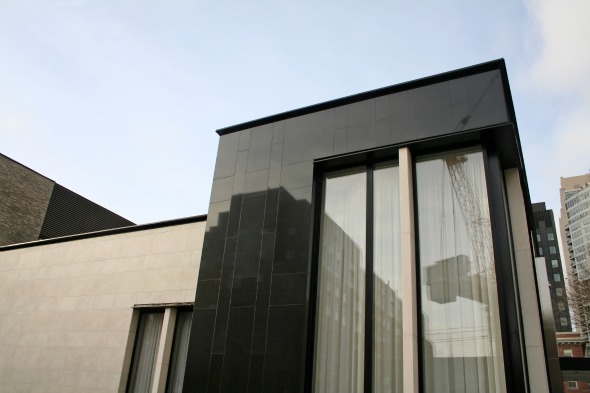 For nearly a decade, a row of Victorian houses - former residences for nearby Victoria College students - sat mouldering on this lot. In 2008, they were demolished, along with the southernmost of the two "University Residence" buildings on St Thomas. When the developer, Minto, had to put the project on hold in 2009 due to some remaining financial turbulence, it looked like all of that destruction was for nothing. But recently, with the unveiling of a brand new - and pretty slick - sales centre, it looks like things are back on track. With the new condominium at 77 Charles Street rising out of the ground to the south, and the One St Thomas towering over both of these sites, the area is gradually being absorbed into Yorkville's luxury high-rise hood. One wonders how long the last remaining holdouts from the area's previous low-rise Victorian character - like Theatre Books - will last. 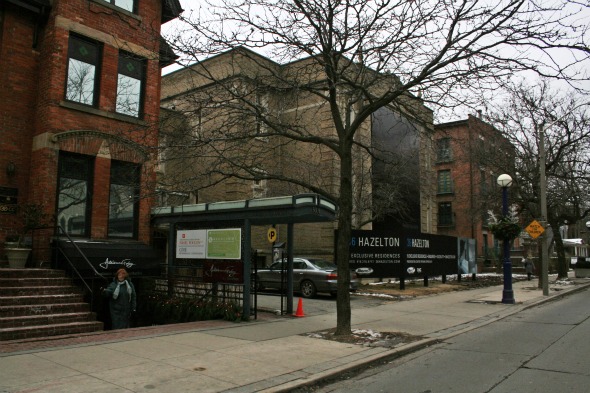 My least favorite of the proposals. St Basil's is a former Catholic school that was built in 1928. Like many schools in downtown Toronto, it had to shut down due to declining enrollment. A developer proposes partially tearing down the current building (portions of the facade would be kept) and building a seven-storey building in its place. Originally rejected by both Heritage Toronto and the city planning department, the application was - surprisingly - approved in 2009 by city council. The proposal is in the sales mode now. While its sad to see St. Basil's go, the partial destruction of the building has a wider importance beyond Yorkville: as a contributing building in the Yorkville Hazelton Heritage Conservation District, its destruction calls into question the real power of these districts to shape development.

Here's a map of the developments: