What does the future hold for Wallace and Lansdowne?

Wallace Avenue intersects with Lansdowne where the latter street curves gently north of Bloor, at what has to be one of the city's most well-preserved Edwardian commercial crossroads, a little high street that came into existence to service what was once a thriving working-class neighbourhood. As the neighbourhood to the south and west steadily transforms itself, this group of storefronts is likely to be swept up in the changes in the next few years, but right now it's a fascinating and intimate little study of city life. 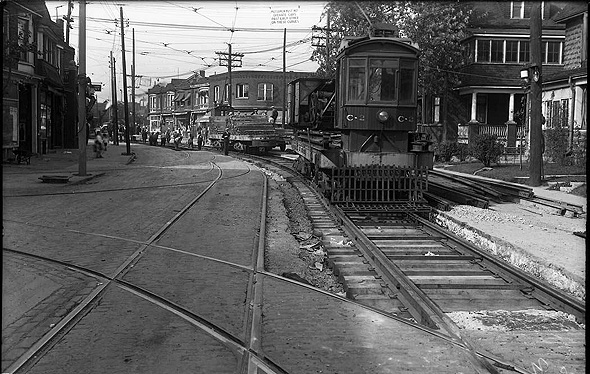 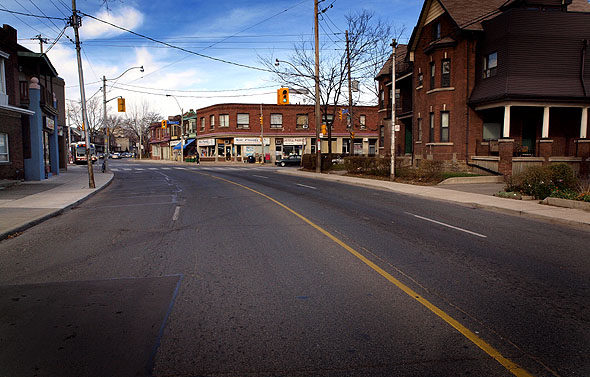 A search through city archives turns up just one photo of Wallace and Lansdowne from 1929, shot to document an upgrade to the streetcar tracks that used to run up Lansdowne, from a spot on the street just next to the TTC car barns that formerly stood between Wallace and Bloor. The view hasn't changed much since then, from what can be seen just behind the work crew and their equipment. The building that commands the intersection at the broadest angle of the crossroads, now occupied by New Friends Travel, was once William Hertel's pharmacy according to a 1921 city directory. 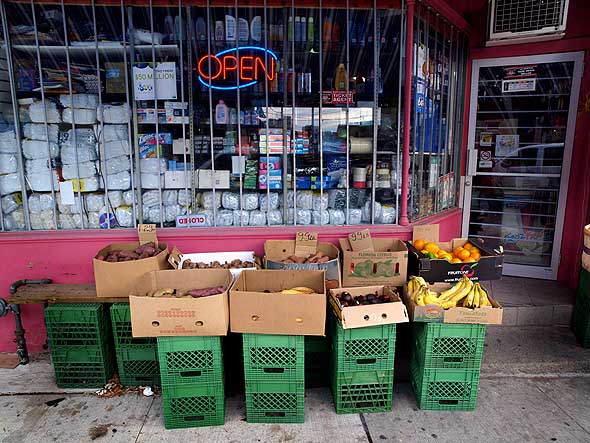 In an age before reliable or inexpensive home refrigeration, city neighbourhoods were punctuated by little retail centres - a greengrocer and butcher shop every couple of blocks for daily shopping trips, with larger commercial hubs like Wallace and Lansdowne at further intervals. Might's City Directory from 1921 records it as a thriving little area, with Hertel's drug store, alongside two grocers and two shoemakers, a physician and a dentist, a barber, a stationer, a newsdealer, a tobacconist, a confectionary, a milliner, a clothing repair shop, an Oddfellows Hall, a Chinese laundry and Wallace Vulcanizing, in a storefront between what is now Ely's Beauty Salon and Pepper's Cafe. 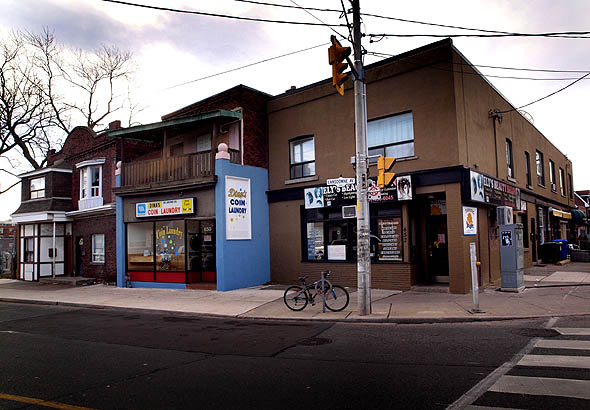 Jose Rodrigues has run Peppers since 1984, and on a chilly Monday afternoon, the place fills up with a small crowd of mostly men here to watch Barcelona play Real Madrid. Jose - everyone calls him Joe - says the low point for the area was the late '90s, when the police shot a guy involved in a drug deal right across the street, in front of the big old house that commands the southeast corner of the intersection (Dr. Morgan Alfred's offices in 1921). Since then, he says, things have gotten steadily better. 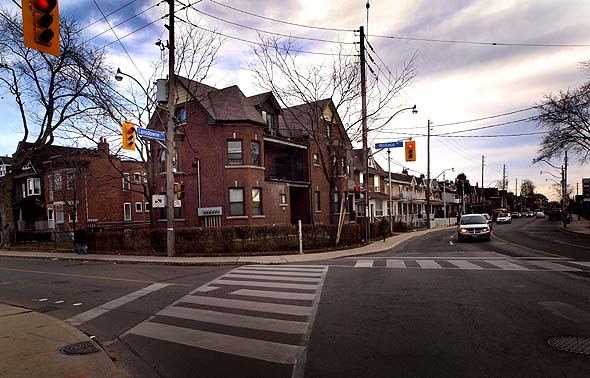 A few months ago, French game developer Ubisoft opened up a new office in the old GE building just to the west, with plans to fill it with 800 employees. As if anticipating the changes, a young couple bought the bakery across the street from Pepper's, changed its name to Paris Bakery and gave it a much-needed makeover, with room for a new patio that will mirror Joe's across Wallace. "It makes this corner look a lot better," he says. 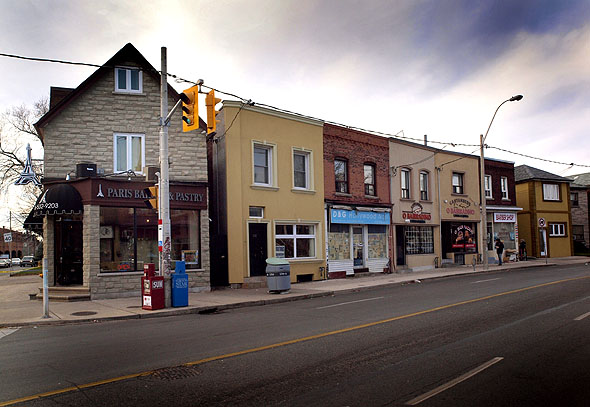 Of the 18 remaining storefronts at Wallace and Lansdowne, only three of them are currently vacant, including the two next to Precious Flowers on the northeast corner. Some have a ghostly retail life at best, like the mysterious office at 190 Wallace, and Venture's Dry Cleaning next door, but others are thriving. Novelist Russell Smith lives just nearby, and says that the line ups at O Bairradino Churrasqueira are often fifteen minutes long, but that the barbeque chicken is worth it - "the best I've had in the city." 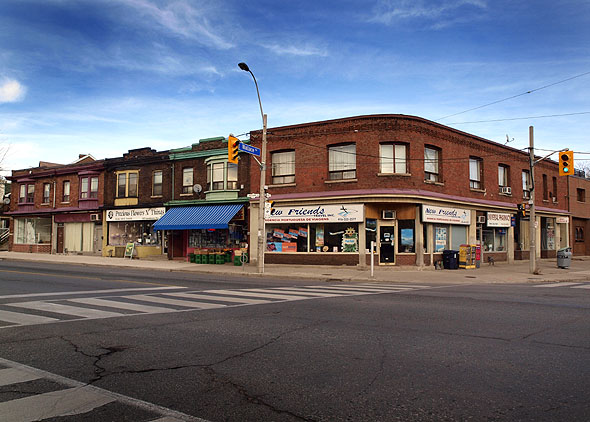 Smith represents the people who Rodriques gratefully sees transforming the neighbourhood, mostly from Bloor Street upwards, where art galleries, vintage shops, cafes and restaurants have been infiltrating an area that stubbornly retains its crackhead presence. Smith, also a columnist at the Globe & Mail, says he was a regular at Pepper's even before it became his regular World Cup spot this summer, and he fondly describes the morning regulars at Paris Bakery, a contingent of seniors who've hung on since its previous incarnation as Bom Apetite, and who take advantage of its new liquor license to get a good beer buzz on before noon.

With all this action happening, it's hard not to look at New Friends Travel and imagine that its generous frontage would be irresistible to a Starbucks or some other bellwether chain. Joe at Peppers loves the idea, though he says that the owner has no intention of selling out. It's the sort of area where familiarity has created an informal BIA among the businesses; Joe tells me that he and the owner of O Bairradino grew up on the same street in the same town in Portugal. 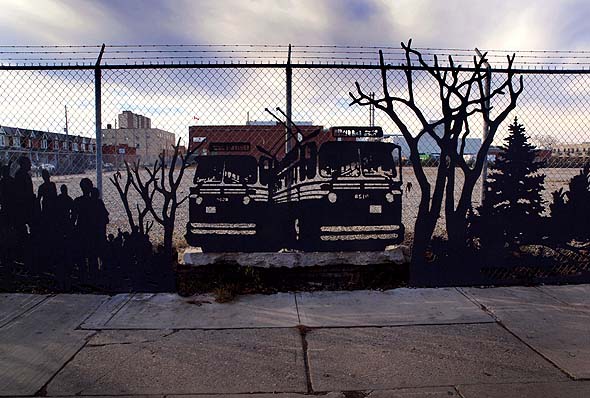 How long that will endure remains to be seen; Joe says he's started thinking about retirement after 27 years. "I haven't seen hipsters in Pepper's yet," says Russell Smith. "If I was the owner I don't know if I'd like it, but for businesses around here this can't help but be good." The houses around Wallace and Lansdowne, built for the workers at the American Standard plant and the once-massive General Electric complex that were once just up the street, are turning over at a furious rate, though Smith says the only potential drawback to the neighbourhood is the former car barns site, now an empty lot whose chain link fence has been prettied up with a striking art installation sponsored by the TTC. The land is apparently poisoned with trichloroethene, the TTC blames GE for it, and the ongoing dispute means the land sits vacant.

It might not be an insurmountable obstacle, and it's hard to imagine a prime little strip like Wallace and Lansdowne remaining as it is for too long, for pretty much the same reasons that made it a commercial hub for the original residents of the houses nearby. "I think it'll go on being an interesting mix for awhile, but eventually it'll get gentrified out of existence," Smith says, then adds, with a note of regret, "I am partially to blame."