How much does it cost to rent Lower Bay Station?

Like TTC ad rates, the pricing information on vehicle and station rentals is actually readily available, should one care to seek it out. And yet, this is the type of thing that I suspect many people casually wonder about, even in the absence of an occasion to rent the facilities themselves. I've actually thought of renting a TTC bus a few times, which comes in at $441.83 for a one-way trip in the city (though it costs an additional $109.61 to have a supervisor on hand if you're doing any filming/photography).

Streetcars are more expensive, coming in at $969.54 for three hours on an old PCC model and $1396.68 for CLRV cars. But, what about the TTC stations themselves? I've heard of numerous parties taking place at Lower Bay station over the years and have often wondered how much the organizers or companies have to shell out to get the space.

Although the TTC doesn't publish this information on their charter rates page, an email to Brad Ross, the commission's corporate communications director, revealed that the cost schedule for filming at a subway station gives a pretty good indication of what it would cost to rent one for a party or whatever else someone had in mind.

Perhaps surprisingly, if you don't need a train, the price is pretty reasonable. Assuming the crew are working regular hours and that you'll need to have some electricians on hand whether you're filming or not, for three hours (the minimum), you're looking at $606. Even with overtime factored in, the same duration would cost $1140. Obviously, if a subway is required, the price goes up significantly (to around what I would have estimated in the first place), but it sill doesn't strike me as over the top.

Take a look at the price chart below for more detailed info.

Brad Ross contacted me to clarify that the TTC requires a train on each track for parties/social events as a safety precaution against someone falling onto the tracks, which obviously changes the pricing structure significantly. 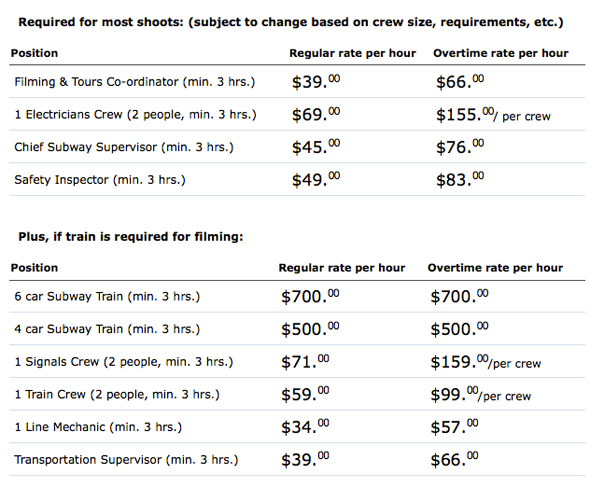