The TTC unveiled new OneStop-designed information screens at Dundas West Station this morning. Unlike the next vehicle arrival notification signs (photo below) that have been implemented at many stations, these new screens will be located near fare collection booths so that riders can determine the status of the subway prior to entering the system. 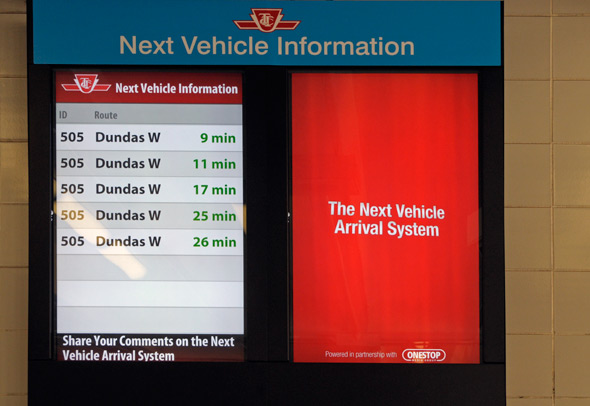 Although lacking the fanfare that accompanied the unveiling of the new Rocket subway trains last week (obviously!), a small contingent of press showed up to hear Adam Giambrone explain the features of the latest asset in the TTC's plans to provide customers with real-time information and updates.

The signs will provide the following info: 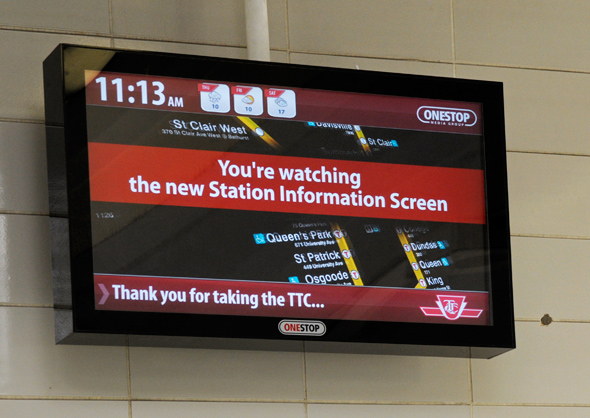 Of these, three in particular strike me as noteworthy and helpful. Starting with the most important, the full-screen alerts that will appear when a major disruption has taken place should help passengers to decide whether or not entering the subway is a wise decision. With direct information from transit control, one might choose to take a surface route or alternative transportation method so as to avoid what will be a significant underground delay. That won't help everyone -- some will find themselves having to ride out delays on account of potentially limited routes that service their destination -- but it should come in handy when there are multiple options available to the rider.

Excitedly reminding everyone of the TTC's recent arrival on Google Maps, Giambrone pointed out that upon encountering a significant delay, one might also use a smartphone (if he or she has one) to access a trip planner for alternate routes. 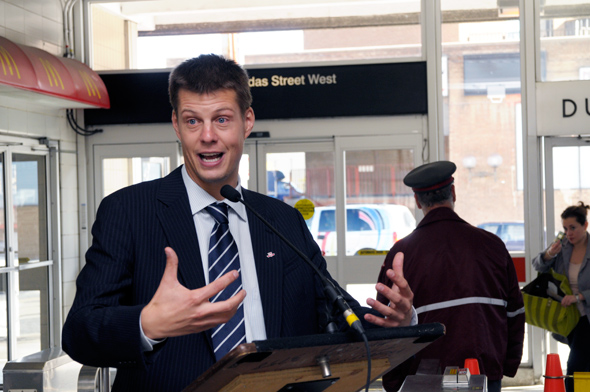 The E-alerts, which will be used in the event that there is a minor disruption, should also help keep passengers informed of what to expect on their ride and will thus likely temper some of the frustration riders experience during delays. And again, if an alternative surface-based route route is only slightly longer, one could opt to avoid the portion of the system experiencing the delay or by-pass it altogether.

The planned route diversions may also prove helpful, though I suspect that because they only appear periodically, not everyone will receive the information prior to entering the station. Ditto for the other information that'll get screen time during normal operations, which will appear in a rotation rather than on the screen all at one time. And while I'm on criticisms, giving these signs more prominent labels would certainly help to ensure that people know to look at them when arriving at a station. 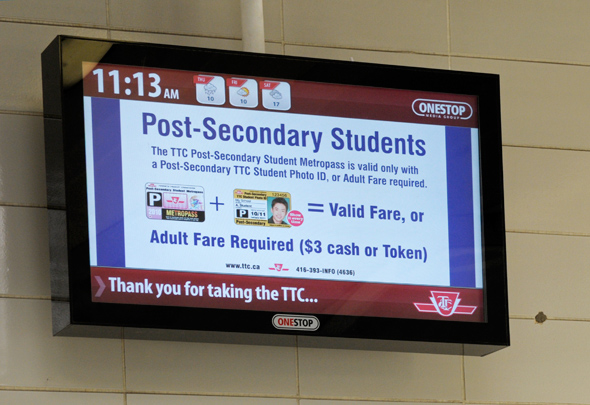 Perhaps the best part of these signs, however, is that fact that they're free -- well, to the TTC anyway. As part of their arrangement with OneStop, who provides the TTC's digital signage, all 69 subway stations will be outfitted with information screens by the end of 2011 at no direct expenditure to the Commission. And while that means advertisements will appear on the screens, that's not a bad trade off when one considers that they're kept in check during the info-cycle and will be put on hold during major delays.

That's the story on the signs, but there's one little tidbit to add onto the end here. After making his initial remarks, Giambrone was asked about the timeline on cellular service coming to the subway system. And although he couldn't (or wouldn't) provide anything too specific or concrete, he did suggest that it will be rolled out in the next 12-18 months. So slowly but surely the TTC makes the technological strides needed to run an efficient, passenger-friendly system.