Is this Google Maps error actually a "trap" neighbourhood?

After last week's post about Google's recent conversion of Wellesley Street to Lourdes Lane, I started searching for other instances of errors on the Toronto version of their maps. And, as some commenters had predicted, I actually found quite a few. But, interestingly, hardly any that had yet to be corrected.

A few of these former errors included misplacement of subway stations (Downsview was apparently once placed in the TTC yards immediately north of Wilson Station), numerous misnamed streets and landmarks, and the incorrect labeling of certain neighbourhoods. While most of these have been cleaned up, at least one example of the last error still exists today.

Many who followed the Fuzzy Boundaries naming project last year noticed that what was then supposed to be a nameless neighbourhood had, in fact, already been given the designation "Silverthorn" by Google. But, in actuality, Silverthorn is a neighbourhood located north of what is now referred to as the Junction Triangle (which is also not quite properly placed on the map above).

What's a little odd about this particular mistake is how long it's been around. From what I can gather, the Silverthorn label has been out of place for at least a year and a half, and quite possibly much longer. All the other errors that I've read about from that long ago have already been corrected. 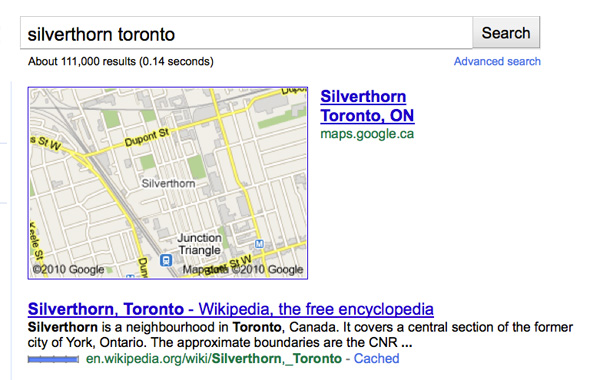 Maybe this is a "trap" neighbourhood. The term "trap" in this context refers to the possibility that Google has misidentified the area intentionally so as to catch (or trap) potential copyright infringements from rival cartographers. More common with streets, the strategy does once in a while extend to towns, parks and buildings. So why not neighbourhoods?

It's long been suspected that TeleAtlas, the company who provided Google with mapping data prior to their split in 2009, incorporates "trap" information into their maps, and perhaps this is a remnant of that strategy that Google has left in place.

Given that mapmakers almost never comment on "trap" info, this little theory does, however, remain firmly in the sphere of speculation. But, along with the length of time the error has been left to stand, it's odd that the addition of the label "Junction Triangle" to the map (even if it's a little too far east) didn't precipitate the correction of the Silverthorn error.

So there's at least some reason to suspect that Google may be up to something. And, hey, it's certainly a hell of a lot sexier than thinking it's a simple mistake.