The comet Hartley 2 (a.k.a. 103P/Hartley) will be visible early tomorrow morning assuming the sky is cloud free (which it's supposed to be). Although Hartley's 1.1 kilometre diameter isn't particularly big as far as giant masses of ice and gas go, it is passing rather close to earth at a range of 17.7 million kilometres. And, given that this is the object that will likely destroy the planet and its residents at some point in the distant future, it might be fun to satisfy one's moribund curiosity by having a quick peek at it.

Kidding! About the last part, that is. Even the wackos aren't so big on labelling Hartley 2 a doomsday rock. But, you'd think that they would be given that NASA has supplied them with much conspiracy theory fodder. The Deep Impact spacecraft (what a reassuring name), is actually studying the comet as part of its EPOXI mission (though, as it turns out, that's only because their original target was too faint to bother with).

Despite the fact that comets generally only pass this close to earth a few times a century, because of its relatively small size, to see Hartley 2 you'll need to bust out the binoculars or, if you have one, a telescope. Folks who live in areas with very little light pollution will likely be able to see the comet with the naked eye, but that certainly won't be the case in the city. A super-powerful camera zoom might also work, but don't expect usable photos or the auto focus to help out much in the low light conditions.

So if you have to wake up early for work tomorrow -- and by that I mean around 5:00 a.m. -- or if you're still up from your weekly Tuesday night bender, then grab yourself some magnification and look towards the star Capella, the location of which is conveniently mapped below. 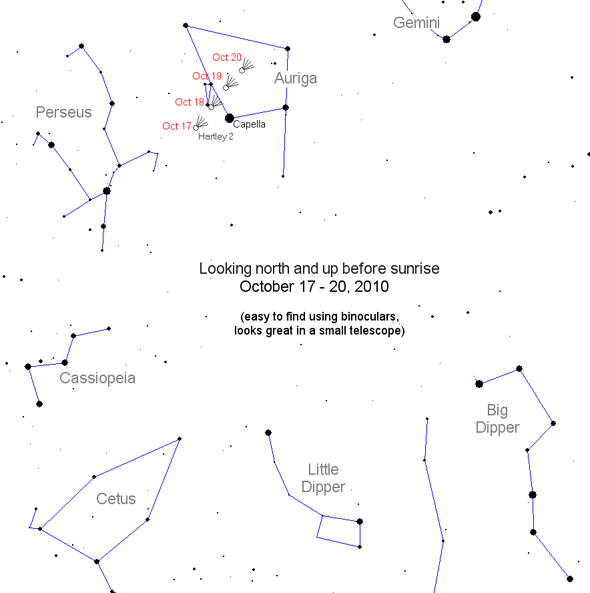