A closer look at TTC routes on Google Maps

Yesterday's news that TTC routes are now available on Google Maps provides a pretty solid example of something that should be filed in the "better late than never" category. Although the technology has been available since 2006, and other transit systems in the region already have Google-based trip planners (eg. GO Transit and York Region Transit), the TTC forged ahead with its own program, which was announced earlier this year. Upon its release, reviews for the TTC Trip Planner were rather critical, citing problems with landmark identification, route logistics and site navigation.

So the question I toyed with last night was how well the Google version works out of the gates. I've noticed a tendency for people to assume that because something is affiliated with Google it must be hyper-usable and smart. While that may indeed be the case here, the application of such a theory certainly warrants at least a little testing.

Although a call to TTC spokesperson Brad Ross this morning revealed that the TTC won't be releasing the details of their partnership with Google until Tuesday, a quick look at the company's information page on its transit planning maps indicates that, strictly speaking, Google isn't necessarily in full control of whether or not a given transit agency's route planner works all that well. Based on my interpretation, Google merely provides a template (advanced as it is) that a transit body like the TTC can use to input their route data. Google then works out its suggestions based on what it's been given from the source.

Update (3:05 p.m.): A little digging into how the arrangement works in other cities revealed this information from the Edmonton Transit System. On their FAQ page, ETS explains how their own trip planner and Google's differ: "Google uses schedule data provided by ETS. You may get different results than the ETS Trip Planner because a different calculation may be used for walking, transferring and waiting. Google also uses a different base map and landmark search locator." One would imagine the TTC/Google arrangement announced on Tuesday will be similar.

It is thus not much of a coincidence that TTC routes have made an appearance on Google only after the completion of their own trip planner (there's a lot of data to be sent Google's way, after all). That's not to suggest that the TTC had to create a fully fledged planner of its own before getting on board with Google Transit, but to underscore what only makes sense: the route labeling and scheduling information all derive from the TTC. A Transit outfit could (like GO, for instance) skip the creation of their own dedicated planner by opting to rely on Google's implementation, but it's not as if Google compiles the route information in the first place. They do note that they penalize routes with multiple transfers, but so too does the TTC's own trip planner.

So, if the route information comes from the TTC, one area of interest for those looking for significant differences is landmark and street recognition. When one uses a trip planner, he or she will often want to enter a place-name or an intersection rather than an address. This was something the TTC trip planner didn't do so well when it was released, though it has been improved. And based on my initial tests, this is also a potential area of weakness for Google's trip planner. 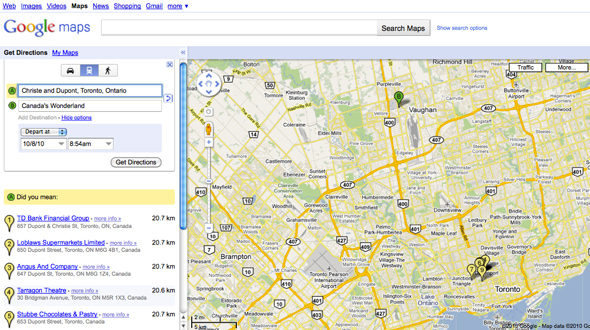 My first tests involved trying to ascertain whether or not TTC routes would hook up with those of the York and GO transit systems. Selecting Canada's Wonderland as a destination, it was immediately clear that the planner has this covered off. What was surprising, however, is that it struggled with my start location. Given that there are bus stops on each of the corners of the intersection of Christie and Dupont, I assumed that this would be a cinch, but it would only spit out businesses close to the intersection, rather than the intersection itself.

Not a huge deal for someone who knows that area well, but certainly a problem for those planning a route in an area that they lack familiarity with. Perhaps even more strange was that when the street names were reversed (i.e. Dupont and Christie), the intersection was recognized immediately. Not only that, after it had been picked up, it didn't matter which order I used (see below).

Update (October 10):
A commenter rightly notes that in the above example "Christie" has been spelled incorrectly (as Christe). This may be the reason why the planner has difficulty locating the intersection, but since originally publishing this post, I've experienced mixed lucked with the planner picking up the street names. Sometimes it does; sometimes it doesn't (see the example with correct spelling below). 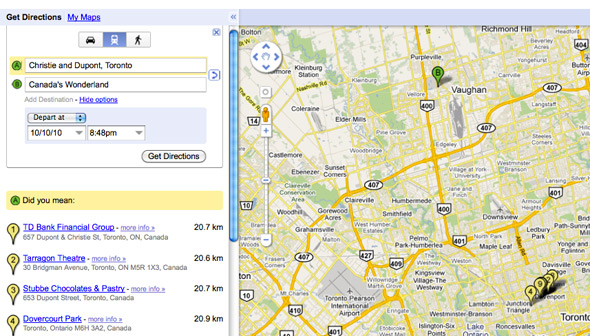 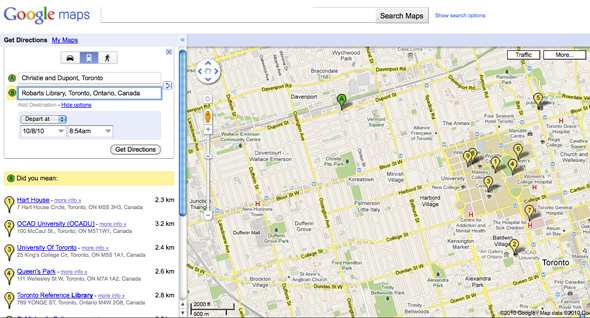 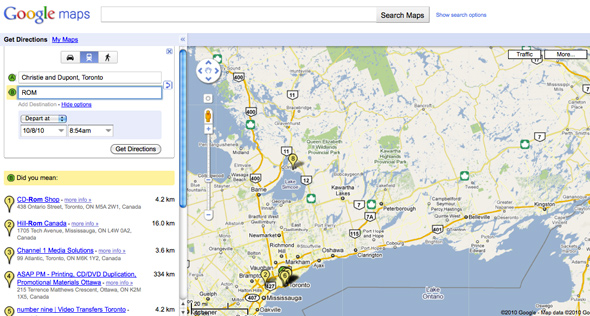 The next test was a straightforward one. How well would the planner handle conventional short forms for popular destinations. The results were mixed with this one. Although it didn't recognize the ROM and would only give results for local business around Robarts Library, it had no problem when I used the name SkyDome instead of the Rogers Centre. In the case of the ROM, one need only spell the proper name out in full or add "Toronto" to the description to get the right result (this was true of the AGO and Casa Loma as well), but it would appear that Robarts is not listed (despite the fact that the form auto-completed my entry with "Toronto, Ontario, Canada" when I typed it in).

I'm not sure if this is a huge deal because, again, one can use the business listings to get an accurate route, but my sense is that the user shouldn't really have to do this. 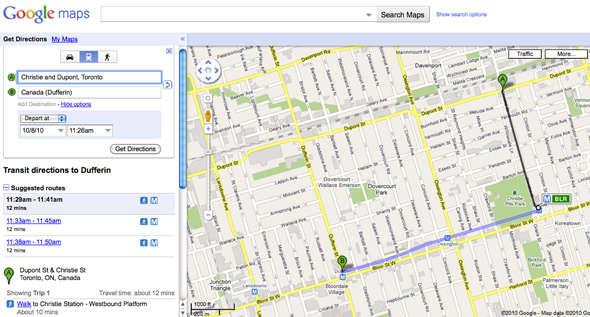 Another oddity, if not a total weakness, is the planner's apparent elimination of certain infrequent bus routes. Sticking with the starting intersection in the above examples, when leaving from Christie and Dupont, it sometimes makes sense to take the Christie 126 bus south to the Bloor-Danforth subway line. Try as I might, however, I just couldn't give it a scenario in which it recommended this over walking or taking the Dupont 26 to Spadina or St. George Station (the TTC's trip planner, on the other hand, does offer this bus as an option). To some extent this is good. That bus never seems to be on time, and the walk to the station takes roughly 10 minutes. And yet for those who can't or won't walk that distance but need to get to the subway, it should really be on there as an option, even if it takes longer than travelling on foot. It's possible that this is a timing issue, and that there just wasn't a bus within range during when I was hypothetically travelling, but I made four attempts, so I figure this is unlikely. 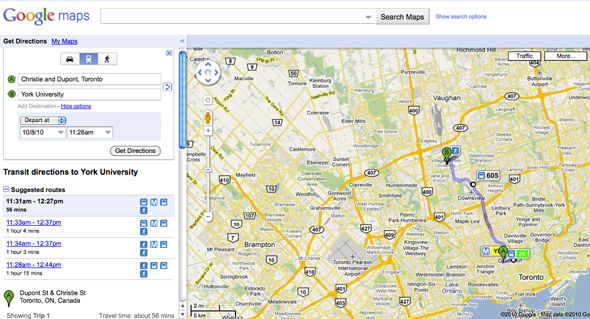 On the plus side, I was impressed to note that trips departing from Downsview Station to York University were given three options (ranked in order based on speed), one of which is the now free (with proof of TTC payment) VIVA service, which doubles up on the route that the 196 Rocket already takes.

When the details of the TTC partnership with Google is are revealed on Tuesday, it'll be interesting to see if Google's live traffic data will be incorporated into the recommendations for surface routes. But, as far as this first run through the planner goes, the examples above show that despite the promising start, a few minor tweaks would help to improve the existing system.