This week saw multiple efforts made to prevent Rob Ford from taking the mayoral race, rumours of Sarah Thomson dropping out, BIXI struggling to get to its subscription target, and a nasty fire at a St. Jamestown apartment building.

"That's ridiculous. Well, today it is anyway." - Sarah Thomson on dropping out of the mayoral race to endorse another candidate.

"Right now the debate is very negative, focused on what is wrong inside City Hall, and how to slash away the more and more aspects of city government. Shouldn't we be engaged in a debate on how to ensure that City Hall plays the most positive role possible in our lives?" - OneToronto's campaign website on changing the discourse of the mayoral race.

"Our biggest problem is that people think it is already happening, so they don't need to sign up. We're also struggling with people who think it's a good idea, but don't sign up." - Sean Wheldrake on BIXI Toronto's pushto get 1000 subscriptions by November 30, 2010.

"At stake is not just four years of bitter strife and division at City Hall but a reversal of progress we have made on housing, on our waterfront, in the arts, social services and on rebalancing our transportation networks and a message that the open and tolerant society we have been building in Toronto is in jeopardy. Our city is far from the incompetent basket case that this campaign has portrayed; we need to move forward at this crucial time not backwards and the outcome is in our collective hands." - Toronto architect Ken Greenberg on the possibility of a Rob Ford mayoralty.

"Just because you're a woman doesn't give you the right to patronize me." - Joe Pantalone, who's obviously not much of an etymology buff, to Sarah Thomson.

"That was probably as ferocious an apartment fire as I've ever seen." - Toronto Fire Service Commander Bob O'Hallarn on Friday's blaze at 200 Wellesley Street. 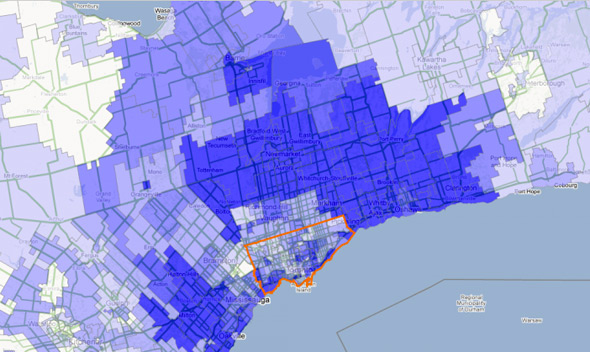 600 - The approximate number of BIXI memberships sold (as of midweek), which leaves around 400 to go for the program meet its requirement of 1000 by the end of November..

1200 - Approximate number of residents displaced by the apartment fire at 200 Wellesley.

25.4 - The percentage of the Toronto police force who actually reside in the city (see above map).

2-2-1 - The Toronto Maple Leafs record in the preseason (as of today).

Todd Reichert, an Engineering PhD candidate at the University of Toronto, made history earlier when he flew the first human-powered aircraft for 19.3 seconds on August 2, 2010.

The poll of the week

The NHL regular season is around the corner, and, as usual, hope springs eternal of the Maple Leafs faithful. More realistic folks, however, have their doubts that Brian Burke's summer additions will be enough to help the team make the playoffs for the first time in five seasons. What do you think?

Lead image by bigdaddyhame, map by Partick Cain of OpenFile.