There's certainly a lot of "Bs" -- or, if you prefer, "B.S." -- in this week's Sunday Supplement. From Rossi's broken blender to concerns about bed bugs at TIFF going ballistic, here's the week in review.

"We probably could have and should have reacted quicker.... When I became aware of it, I said, 'That's it, release them all immediately and unconditionally,' and that was done. But it probably could have happened sooner." - Police Chief Bill Blair on the "kettling" tactic used at Queen and Spadina during the G20.

"The sad fact is that in this town, it's a whole lot easier to get rid of a broken blender than it is to recall a rogue politician.... And that's not right." - Mayoral hopeful Rocco Rossi on why Toronto needs to introduce a voter recall.

"Bad, Bad news from Toronto re: #TIFF10. Torontonian Friend got, yes, bedbugs at the Scotiabank -- a.k.a. where all press screenings are." - James Rocchi taking to Twitter on behalf music writer Helen Spitzer, who claimed to have been bitten by bed bugs during a screening of Scott Pilgrim vs. the World.

"Rob Ford couldn't pass gas in council without 23 votes." - Just one in a long history of colourful quotations from councillor Howard Moscoe (ward 15 / Eglinton-Lawrence) who announced earlier this week that he will not be running for re-election.

"We waaant it." - Chuck and Vince do the City of Toronto a solid by reminding everyone of the e-waste recycling program (video). 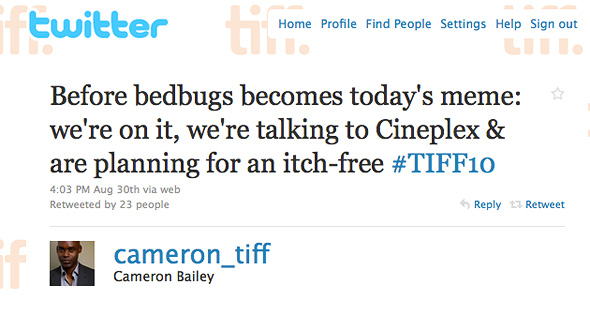 2,608 - The number of people who follow @jamesrocchi (who initiated the TIFF bed bugs scare).

3,569 - The number of people who follow @cameron_tiff (who quickly injected a bit of reason into the "broken telephone").

$125,000 / 19,000 - The cost and number of attendees at the Toronto District School Board's "absolutely inspirational" rally at the ACC earlier this week.

$115,000,000 - Total amount of damages the plaintiffs are seeking in the latest class action lawsuit to be filed in connection with the G20.

7,400 - The number of jobs George Smitherman's youth-employment proposal would provide if instituted.

19 - The number of new sweat bee species that York University researcher Jason Gibbs has discovered across Canada, one of which can be found in Toronto.

$4,000,000 - The amount that the plans to revitalize historic Fort York are over budget.

A little blast from the past with a mayoral connection: Mel Lastman (a.k.a. "Toronto Mel) makes an appearance in this highly persuasive 1985 Ford car commercial.

This may seem a little lame, but with summer coming to a close, I wonder what our readers think is the best season in the city. For my money, it's fall all the way -- but, of course, chacun Ã son goÃ»t.

Lead photo of the Bloor Cinema by wvs / Sam Javanrouh in the blogTO Flickr pool. Video courtesy of RetroTy7 on YouTube.